Why the Mississippi Remains the South’s Most Vital Artery

The Mississippi River, seen here north of New Orleans, feeds into the Port of South Louisiana, the largest port in the U.S. Port workers here have higher average starting salaries than workers in the tourism sector
Stacy Kranitz
Ideas
By Walter Isaacson

When I was in my late teens, I worked some summers and weekends as a longshoreman on the docks and derrick barges of the New Orleans riverfront. The pay was great, and the work, though hot, was not as hard as people thought.

From that experience, I developed a sense of romance about the Mississippi River. Like Huck Finn, I came to associate it with freedom and frontiers and race and card players and lighting out for the territory. I once tried to write a novel about it, which was truly bad and still sits in a bottom drawer of my desk.

During my last year as the editor of this magazine, in 2000, I indulged this romance by taking a group of writers and editors on a two-week boat trip down the river from Missouri to the Louisiana swamps to produce a special issue on what we called “the river of dreams.” One of the main things we saw was how communities all along the river–from Hannibal to St. Louis to Memphis to Natchez to New Orleans–were drawing on this romance to attract tourism. In an age of big-box stores and Amazon, with manufacturing in decline, the river towns of the South were exposing every brick of every warehouse and building to create quaint shopping and entertaining experiences.

In New Orleans, the Esplanade Avenue wharf where I once worked as a kid is being converted into a music and performance venue to draw visitors from nearby Frenchman Street and the French Quarter. The levee walk in front of Jackson Square, where I proposed to my wife, has just been upgraded into a magical promenade. And in the newly gentrified Bywater and Marigny neighborhoods, rotting docks have given way to Crescent Park, a ribbon of gardens and bike paths and art installations and performance spaces.

Now that I have moved back to New Orleans, I have become less mesmerized by the romance of the river and more respectful of its gritty reality and the economy it supports. Earlier this summer, I took a boat ride to look at the facilities of the Port of New Orleans. We embarked at a spot that embodied the tourist elements of the riverfront, next to the sprawling convention center where the Essence Festival was in full swing and a warehouse that now houses a float-filled attraction called Mardi Gras World.

But within minutes we were exploring the container terminals and break-bulk facilities that make the combined ports of New Orleans and South Louisiana, the latter of which boasts the largest in the U.S. in terms of tonnage. Huge amounts of the nation’s grain goes through these ports, as does most imported steel, coffee and rubber and exported poultry, plastic resin and petrochemical products.

There’s something noble about the economy of the port, especially in an era when good-paying middle- and working-class jobs are in decline. Unlike tourism and hospitality, which create many jobs but most at comparatively lower wages, the average salary of the workers in port jobs is $63,000, or 35% higher than the average for other local jobs.

In addition to decreasing income disparities, jobs at the port and elsewhere on the Mississippi River tend to decrease racial inequalities, something that Huck and Jim on their raft would have appreciated. Even in the early 1970s, when I worked on the river, there was a rule of the local longshoremen unions and stevedoring companies: all crews formed each morning, whether they were working the docks or barges or tugboats, would have an equal number of black and white members. It spread to other sectors. The doctors and dentists who served the longshoremen health plans, for example, had to take both black and white patients. It led my grandfather to partner in his practice with Dr. Andrew Young Sr., whose son became the noted civil rights leader.

The commerce and constantly flowing mix of people help create a worldliness and an appreciation for diversity that is sometimes lacking in more inland and insular towns. The foods have more ingredients, the music has more influences, and the accents have more inflections, especially if you’re within a horn blast of the Port of New Orleans. In a world that is becoming less comfortable with diversity, it would be nice if everyone could spend some time at a big river port.

We devote a lot of energy, especially in places like New Orleans, thinking of ways to increase tourism. That’s fine. But we also need to focus on nurturing and improving our port. Like other ports, it suffers from our national inattention to critical infrastructure. The money spent on seemingly mundane things like new cranes and terminals will generate jobs in local port-related industries and also enhance distribution for the agricultural and industrial products from the 40% of America whose shipping needs are served by the Mississippi.

At the end of my boat ride past the port facilities, I saw the work that is being done to divert some of the river sediment so it can help restore the disappearing marshes and wetlands of the Gulf of Mexico. That, too, is necessary to protect the commerce and shipping needs of the nation.

Both the commerce carried by the river and the nutrients it brings to our coast reminded me of an analogy that was at the heart of both the art and the engineering of Leonardo da Vinci. He said the body of the earth was like the body of a human, with the rivers serving as the arteries that bring nourishment to us and the earth around us. That is why so many of his paintings, culminating with the Mona Lisa, show a river coming from the ancient mountains in the background and seeming to flow into the body and arteries of his human subject.

“I do not know much about gods; but I think that the river is a strong brown god,” the St. Louis native T.S. Eliot wrote. As he tells us in The Dry Salvages, we should not merely romanticize the Mississippi. We should also respect it.

Isaacson is a professor of history at Tulane University and a best-selling biographer. His most recent book is Leonardo da Vinci 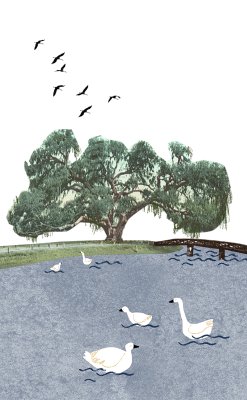 Memories From the South: Waters of the Bayou
Next Up: Editor's Pick