Memories From the South: In Elvis We Trust

We need Elvis now more than ever.

Growing up in Georgia and Alabama in the 1970s and ’80s, I always felt that the bad old days of Southern prejudice and ignorance had passed, that we were entering a new South built upon hard-won racial equality, charity and the sense that no one was better than anyone else. The country had a long way to go, but if the South had come so far in just a generation, then nothing could stop progress.

I’m not so sure anymore. Lately, I feel like our moral compass has been broken, spinning to intolerance, greed, hypocrisy and a meanness that’s as thick as the humidity in July.

In times of trouble, I put my faith in Elvis Presley, who represented the South’s better angels. He was a hard worker, and although he lived the high life, he never forgot that he had been born into poverty. I don’t think you’ll ever hear an interview with the man when he didn’t express gratitude and humility for all that life had given him.

And he was a self-made talent, perhaps the greatest entertainer of all time, born in a two-room shack in Tupelo, Miss., in 1935. I’ve been to that small shotgun house many times, reflecting on what it says about America. Greatness can be born anywhere.

Elvis was famous for his generosity–ultimately to a fault–giving away cars, expensive gifts and other handouts to anyone who needed a leg up. That’s how the Presleys survived the Depression. His father Vernon was a laborer who was often out of work, and the Presleys relied on the kindness of family and neighbors to get them through the hard times.

Vernon and his father and brother had built that two-room house themselves. As tiny as it seems, it ended up being too nice and expensive for the family to hang on to. When Elvis was young, the Presleys lost it, and they ended up shuttling around Tupelo, often living in black neighborhoods, where Elvis famously developed an ear for black gospel and blues to supplement his love of the old-time gospel he knew from his own church.

The house still looks like a shack. But it was nicer than what many other families in Tupelo, in Mississippi and around the South had in 1935.

Politicians had a hard time demonizing the poor in the 1930s and ’40s. That doesn’t seem to be the case today. Today demagogues and charlatans court Southern crowds with messages that exalt the rich and powerful and dismiss the poor and marginalized as being somehow deserving of their fate.

And the crowds gobble it right up. They believe that their problems could be solved if only the poor people below them didn’t ask for so much. To blame an immigrant for “stealing” a job, instead of the CEO who won’t pay a living wage.

Elvis knew what it was like to be dirt-poor, to struggle for food and shelter. By the time his talent helped him buy a Memphis mansion with golden-edged mirrors and thick white carpet, he was already using his money to help others, often quietly and with no fanfare. He didn’t create a foundation and then use outside donations to buy a larger-than-life painting of himself. He just went out and bought that lady a Cadillac. Got that fella a job.

I still believe in my heart that most Southerners are still more like Elvis than the President. We are most likely to pull over and help someone stranded on the roadside. Most of the people I know in my Mississippi town would give you the shirt off their backs. Most Southern preachers don’t spend Sundays in the pulpit spewing hatred and intolerance. Most people agree that racism and white supremacy are evil. Even preschoolers know it’s always better to tell the truth and take your lumps than lie and evade.

And yet here we are. We know right from wrong, but most of us down here voted for wrong. As Elvis once said, “Truth is like the sun. You can shut it out for a time, but it ain’t goin’ away.”

Atkins’ latest book is The Sinners 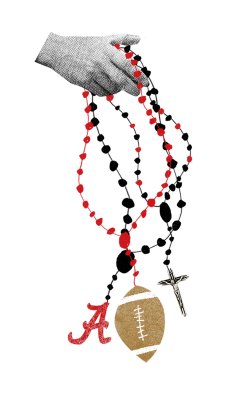 Memories From the South: The Church of SEC Football
Next Up: Editor's Pick