Rescue teams are continuing to search through submerged villages to locate missing people after part of a newly constructed dam in southern Laos collapsed on Monday night, sending walls of water into the surrounding rural towns.

The disaster has rendered nearly 7,000 people homeless in Attapeu, an agrarian province near the border with Cambodia and Vietnam, according to state media.

Twenty-six people have been confirmed dead, according to the state’s official news agency, KPL. Many fear the final toll will be much higher.

When a portion of the $1 billion Xe Pien-Xe Namnoy hydroelectric project gave way on Monday, flash floods quickly swamped seven villages in the surrounding countryside. Unsuspecting villagers took refuge on rooftops and scrambled up trees as the water swallowed their town.

At a press conference on Wednesday, Sisoulith said 131 villagers are on the official missing persons list. Earlier in the day, the state-run Vientiane Times reported more than 3,000 villagers, or nearly half of those affected, await rescue.

District governor Bounhom Phommasane told the Times that the priority is bringing survivors to dry land. “A second step for us will [be] to recover and identify the deceased, but for now we hurry to find those who are still alive in the area,” he said.

An elderly woman carries a child while other residents displaced by massive flood waters from the collapsed dam seek shelter in Paksong town in Champasak province on July 25, 2018.
Ye Aung Thu—AFP/Getty Images

Rescue efforts have been complicated by heavy rain, which is forecast to continue for the rest of the week, exacerbating the flooding.

The main South Korean company behind the development of the dam, SK Engineering & Construction, said it is investigating what caused the auxiliary dam, known as Saddle D, to collapse.

After reportedly noticing serious fractures on the structure on Sunday, the consortium building the dam advised 12 endangered villages to immediately evacuate. Just hours before the impending disaster, it issued a letter warning that millions of tons of water would cascade downstream if the dam failed.

Advocacy group International Rivers said the disaster in Attapeu reveals the “inadequacy of warning systems to prevent loss of life.”

“Communities were not given sufficient advanced warning to ensure their safety and that of their families,” the group said in a statement. “This event raises major questions about dam standards and dam safety in Laos, including their appropriateness to deal with weather conditions and risks. ”

The government has declared the flooded area a disaster zone and called for emergency aid supplies to assist the survivors.

The International Red Cross, UNICEF and Save the Children are among those who have joined the response effort.

“This is a terrible tragedy and we still don’t have a clear picture of its scale. Hundreds or even thousands of families are likely to have been left homeless, while some have lost loved ones. Many children are still missing and we are gravely concerned for their wellbeing,” Save the Children’s deputy country director Vilasack Viraphanh said in a statement. 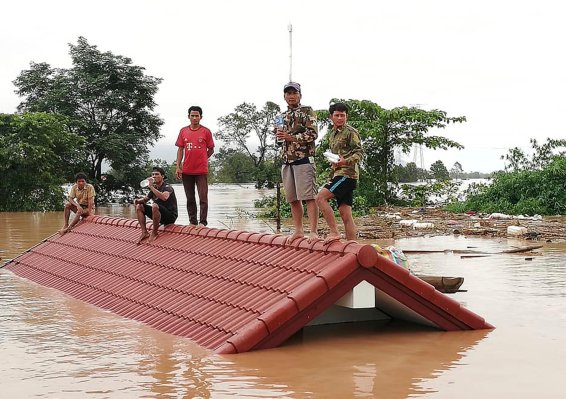 At Least 27 People Killed in Laos Dam Collapse
Next Up: Editor's Pick