The hearing before the Senate Foreign Relations Committee, which spanned several hours Wednesday afternoon, touched on the laundry list of foreign policy matters that have dominated headlines in recent weeks: tensions with Iran, progress towards thawing relations with North Korea, and, most conspicuously, Trump’s relationship with Putin and the fallout of Russian interference in the 2016 presidential election.

Throughout the meeting, Pompeo stressed what he described as the Trump administration’s many accomplishments overseas. “There’s a long list, and I’m happy to go through it,” he said.

But for Democrats and several Republicans on the committee, this was insufficient. In the nine days since Trump and Putin met in Helsinki, lawmakers have grappled with the opaque fallout of a meeting where, critics said, Trump was unduly deferential to an adversary at a moment when geopolitical corrections were in order.

“We find ourselves in an unimaginable situation,” Sen. Robert Menendez of New Jersey, the committee’s ranking Democrat, told Pompeo. “The American people, elected officials in this body, and members of the President’s own cabinet have heard more about the meeting in Helsinki from Putin and his associates than from our President.”

Menendez repeatedly asked Pompeo if Trump had disclosed to him what was discussed with Putin behind closed doors. Pompeo’s response was flippant.

“The predicate of your question implied that there was something improper about having a one-on-one conversation,” he said.

Sen. Tom Udall, a New Mexico Democrat, later asked Pompeo if he was “100% confident” that he “know[s] everything Trump discussed with Putin.”

He also declined to comment on any of Trump’s business dealings in Russia, saying he hoped to avoid the “political circus.” But he soundly rejected any allegation that Trump is sympathetic to Putin’s Russia.

“The same President you’re so concerned about is engaged in a massive defense buildup that threatens Vladimir Putin’s regime,” Pompeo said. “He’s kicked out 60 spies. We put $11 billion into European defense.”

The testy exchange comes amidst a bipartisan effort in the Senate to enact new sanctions on Russia. It is uncertain how that effort, if successful, would be received down Pennsylvania Avenue at the White House, where officials are attempting to secure a second meeting between Trump and Putin. (The White House announced on Wednesday that the meeting, initially anticipated for this fall, would be pushed to 2019.)

“Absolutely,” Pompeo said when asked if the U.S. was working with Pyongyang towards North Korea’s denuclearization. “We are sitting at the table having conversations.” But when asked what advancements had been made, Pompeo averred. “May I answer that question in a different setting?” he asked.

But the conversation returned repeatedly to Russia. In one tense exchange, Sen. Bob Corker of Tennessee, the committee’s chairman, grilled Pompeo over Trump’s remarks about Russian interference in 2016 that called into question the authority of the F.B.I.

“It’s the President who causes people to have concerns. I’d love to have some insights. To create an equivalence between our intelligence agencies and the Russians — that shocks people,” Corker said. “Why does he do these things? Is there some strategy behind creating doubt in the minds of the American people? We have tremendous faith in you, tremendous faith in [Secretary of Defense James] Mattis. It’s the President.”

“I disagree with most of what you just said there. You somehow disconnect the administration from the President,” Pompeo responded. “Here’s what the world needs to know: this administration has been tougher [on Russia] than any other past administration.”

He continued: “There’s this misconception that this administration is free-floating. Make no mistake: this is President Trump’s administration. He’s fully in charge of this.” 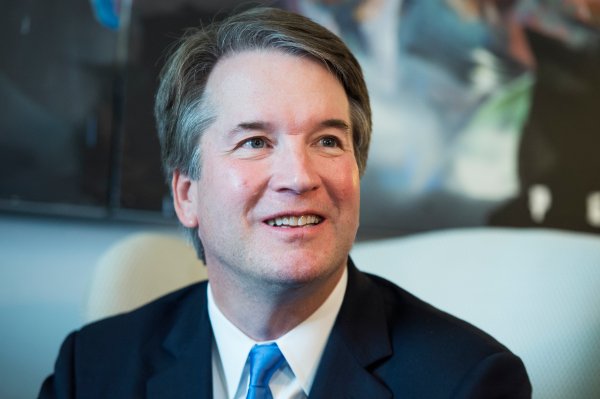 Mitch McConnell Has a Plan to Use Brett Kavanaugh's Nomination for Political Gain
Next Up: Editor's Pick