It’s easy to miss how well Mitch McConnell wields his power as the Senate Majority Leader. That understated muscle, however, is never far from McConnell’s canny mind — and every ounce of it right now is being directed at confirming Brett Kavanaugh to the Supreme Court.

“If there’s any power in the Majority Leader’s job, it’s the scheduling power,” McConnell told TIME earlier this year.

That authority stands to shape not just the highest court in the land but perhaps drive the outcomes of the elections this fall. The savvy tactician from Kentucky stands ready to use a calendar as cudgel against Democrats who, at least at the moment, appear poised to have a very good election night in November. After all, McConnell is a political animal who has no shame in using every development for his advantage.

It’s been two weeks since President Donald Trump announced Kavanaugh as his pick to replace Justice Anthony Kennedy and Democrats are doing everything in their power to muck up the nomination. McConnell is watching closely to use their every procedural speedbump as a launching ramp for Republican gain.

For instance, Democrats are demanding to see every piece of paper Kavanaugh touched during his five years working in George W. Bush’s White House.

“If Judge Kavanaugh’s the right man for the bench that the Republicans say he is, if he’s a fair-minded jurist that they claim he is, why are Republicans hiding his full record from the Senate and from the American people?” Senate Democratic Leader Chuck Schumer said Tuesday. “The foot-dragging needs to end now.”

Republicans have agreed that his work in the White House Counsel’s Office is fair game, but they object to Democrats’ request to review each document that crossed his desk as the Oval Office’s traffic cop, a role formally known as the Staff Secretary. That demand could number in the millions of pages and bury already overworked staffers.

“It’s a fishing expedition and a waste of time,” one Senate Republican official said. “Democrats are trying to find a smoking gun, which, if we’re being honest, doesn’t exist because Judge Kavanaugh knew he was going to face Senate confirmation one day.”

Democrats counter that the Supreme Court is a lifetime appointment, the documents are public and the liberal base of their party will settle for nothing short of these demands. “I don’t think you can wear blinders when you’re talking about somebody for a lifetime appointment to the Supreme Court,” Sen. Patrick Leahy of Vermont told reporters this week.

So far, Democrats have refused to meet one-on-one with Kavanaugh for the traditional courtesy visits until they get their way. Sen. Joe Manchin, the West Virginia Democrat who is up for re-election this fall in a state Trump carried with 69% of the vote, is scheduled next week to become the first Democrat to meet with Kavanaugh.

“I hope that other Democrats will follow suit,” said Sen. John Cornyn, McConnell’s trusted lieutenant. “But whatever the demand for documents will be, you can be guaranteed it won’t be enough to satisfy the 20 Democrats who have already come out against the nomination.”

If Democrats move forward with their demands, McConnell stands ready to schedule confirmation hearings in ways to throw the maximum number of wrenches into Democrats’ re-election bids.

He has already canceled most of August’s recess to keep Democrats in Washington, largely because Senate Republicans have less to lose. Of the 35 seats up for grabs this November, 26 have Democratic incumbents. Ten of them hail from states Trump won. Only one Republican, Sen. Dean Heller of Nevada, faces coin-toss odds. Sen. Ted Cruz of Texas has consistently polled ahead of Democratic challenger Beto O’Rourke, although Democrats remain bullish.

The tentative timeline is for September hearings about Kavanuagh’s nomination right now, but that could slip into October if Democrats stick with their asks for all of the documents. October hearings would be immediately before November’s elections — or, in some states, during the early voting period.

Of the 21 members of the Judiciary Committee, five are on the ballot this fall. Of those five, four are Democrats. (GOP Judiciary members Orrin Hatch of Utah and Jeff Flake of Arizona are leaving the Senate.) The thinking is that if Democrats insist on seeing every paper Kavanaugh passed to the President, then they can review those documents in October — away from the campaign trail. And if those Democrats skip any part of the confirmation hearing to participate in re-election events, such as debates, then Republicans can rightly claim the incumbent Democrats were neglecting their jobs.

If Kavanaugh makes it out of Judiciary favorably, he faces a broader Senate where Republicans enjoy a 51-49 majority, although it seems unlikely ailing Sen. John McCain would return to Washington for the vote. That means Vice President Mike Pence would break the tie in Kavanaugh’s favor, assuming Republicans stand united and no Democrats defect.

The later the confirmation process, the closer to Election Day. That could, perhaps, motivate conservative voters who may have lost some enthusiasm for an all-Republican Washington. Polls show greater interest in the elections among Democrats than Republicans. But conservatives have long seen judicial nominations as a major motivator, and a Kavanaugh confirmation by the Republican-led Senate could be good politics for the GOP.

At the same time, if Kavanaugh is confirmed as expected, such a setback for Democrats could depress their interest in casting votes. In this scenario, McConnell craftily gets a one-two punch that could help him hold the Senate gavel until at least early 2021.

“This is bad politics for Democrats,” a second GOP official said. “But if they want to hold out through the summer, get boxed out of the campaign trail, show themselves obstructionist show-boaters and still be proven losers, that’s on them. We are ready to have hearings and a vote, and they won’t even meet the nominee.”

Democrats and their allies show no signs of sharing this view.

“The American people have a right to know what Brett Kavanaugh participated in during his years with the Bush Administration, especially with regard to human rights abuses perpetrated as part of the so-called ‘war on terror,’ and that is a right that knows no deadline. If it takes several weeks or months to produce the documents, so be it,” said Nan Aron, President of Alliance for Justice Action Campaign. “As for the midterms, we’re confident that people would rather support a Senator who insisted on seeing Kavanaugh’s full record than one who did not.”

— With reporting by Tessa Berenson. 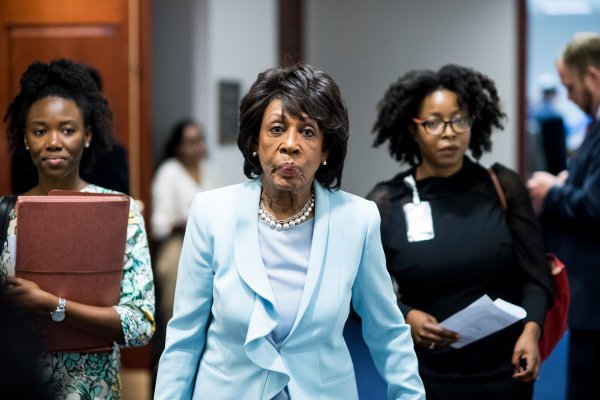