With the release of a recording of President Donald Trump and his former attorney Michael Cohen discussing a deal to bury a onetime Playboy model’s allegations of an affair with Trump, questions about obscure campaign finance rules are once again front and center.

The recording, which aired on CNN Tuesday after being released by Cohen’s attorney Lanny Davis, involves Trump and Cohen discussing buying the rights to the story of Karen McDougal, a Playboy model who alleges she had an affair with Trump in 2006. Legal and campaign finance experts say that, while there is nothing incriminating in the recording itself, it raises more questions than it answers about payments that could be campaign finance violations.

“I don’t think there’s anything on that tape that clearly indicates a campaign finance violation,” said Rick Hasen, a professor at University of California, Irvine who specializes in election and campaign finance law. “It gives ample reason for further investigation. But alone it doesn’t establish illegal conduct.”

Trump and Cohen have already faced questions, lawsuits and federal complaints over Cohen’s $130,000 payment to adult film actress Stormy Daniels, whose own allegations of an affair with Trump arose in the weeks before the 2016 election. But the new recording also involves a third party: David Pecker, CEO of American Media, which owns the National Enquirer. On the recording, Cohen is heard telling Trump he needs to “open up a company for the transfer of all of that info regarding our friend David,” presumably a reference to Pecker. Pecker’s company allegedly paid McDougal $150,000 in 2016 for the rights to her story, but never ran it, in a move known in the tabloid industry as a “catch-and-kill.” McDougal later filed a lawsuit against AMI, and was released from her contract in April.

Nothing on the recording released Tuesday indicates that a payment from Cohen to Pecker ever actually happened. A spokesman for AMI did not respond to TIME’s request for comment. But if Trump, or Cohen on behalf of Trump, paid Pecker for the rights to the story with corporate funds and never reported it, that could be a violation of campaign finance laws. That’s because it may qualify as an in-kind contribution, or payments that are designed to influence the election, whether or not they go directly to a campaign.

Even if Pecker never received a payment from anyone associated with the Trump campaign, he could have still have violated campaign finance regulations by failing to run McDougal’s story in an effort to protect Trump, with whom he is personally friendly. News publications are exempt from campaign finance stipulations if they are fulfilling what is known as a “legitimate press function” of informing the public, but experts say that stipulation may not apply here.

“AMI would probably not be acting in its ‘legitimate press function’ if the purpose of the payment was to keep the McDougal story from going public,” says Brendan Fischer, the Director of Federal and FEC Reform at Campaign Legal Center. “Certainly there may be circumstances where a news publisher’s editorial decision to run or not run a story could fall under the press exemption,” Fischer added, “but if the goal of a publisher’s $150,000 payment was always to not run the story, it shouldn’t fall under the exemption.”

Fischer also said the other question in the McDougal case is that “whether Trump or his agents were at all involved with the agreement or payment.”

Pecker could also find himself in legal trouble if it can be proven that he made the decision to buy McDougal’s story with the intention of never running it after consultation with the Trump campaign. Common Cause, a non-partisan watchdog group, filed complaints with the Federal Election Commission and the Department of Justice in February requesting an investigation into exactly that.

“I just think it again affirms what we filed in our complaint; that it sounds like Donald Trump knew about the hush money payment to McDougal before the election,” said Common Cause Chief of Strategy and External Affairs Stephen Spaulding. “I just think this is more of another log on the fire that these are campaign finance violations and that the thread continues to unravel.” 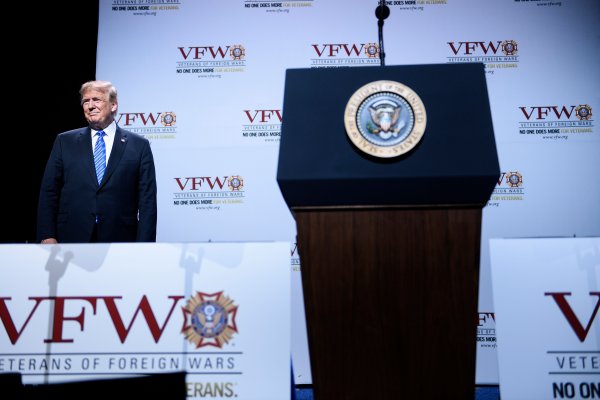 People Are Comparing This Trump Quote to George Orwell
Next Up: Editor's Pick