One Year Ago, Tunisia Passed a Groundbreaking Law to Protect Women. Has It Worked?

In the 1990s, Ahlem Behladj learned to brave being hassled each day by the police officers that hung around outside the women’s shelter in downtown Tunis. This was during the 23-year-long dictatorship of Zine el Abidine Ben Ali, and the dilapidated building was a rare protected space for battered women—and the place where a 19-year-old Behladj and her fellow activists gathered to fight for a law on violence against women.

It was a fight that would take decades. But on July 26, 2017, Behladj was moved to tears as she watched from the public gallery in parliament as lawmakers passed legislation aimed at eliminating violence against women. The law is far-reaching: Among its many stipulations it forbids physical, economic and psychological abuse against women and outlaws harassment in public. It also scrapped a loophole that allowed rapists to avoid jail by marrying their victims.

In a country where 53 percent of women have experienced violence of some kind—significantly higher than the estimated global rate of 35 percent—the law was a huge win for activists. “On paper, I think it’s the best law in the region and probably one of the best in the world,” says Amna Guellali, senior Tunisia and Algeria researcher at Human Rights Watch.

But one year on, while the law has had some positive effects, serious failings in implementation mean it’s not delivering the drastic improvement in protection and prosecution that it promised. Activists are now pressing on to make sure the hard-won legislation makes a real difference to women’s lives.

The Long Road to Justice

Activists at Association Tunisienne Des Femmes Démocrates (ATFD) are on the frontline of the fight. This was the organization that in its early days under the dictatorship set up the first shelter for women. Behladj, now 53, remains an active member, balancing her time there with her work as a child psychiatrist. As she sips coffee in a cafe in downtown Tunis, she recalls the earliest days of the struggle for women’s rights. “I was young and passionate and I cared about injustice,” she explains, “Women’s rights were a crucial part of the fight for justice generally.” Behladj is warm and calm with a gentle sense of humor. But judging by how she has chosen to spend her life so far, that calmness belies considerable strength.

Behladj’s day job fueled her activism. She qualified as a child psychiatrist in 1995, and over the years came across many young girls and teenagers coerced into marrying their rapists. The law had long allowed a rapist of a girl or woman younger than 20 to avoid a jail sentence if he married her. He was free to divorce her after two years. There was always pressure, from the perpetrator and his family, but also from her own family, Behladj says, because marriage was seen as a way the perceived shame of rape could be avoided.

As a member of ATFD and as the organization’s President between 2004 and 2006, and again between 2011 and 2013—a volunteer role she took on alongside her work as a child psychiatrist—she campaigned hard for the removal of the marry-your-rapist clause.

When a marriage starts with rape, that act of violence is rarely the last. Behladj looks down at her coffee and breathlessly lists some of the cases she had dealt with. “One girl I remember—she was forced to marry her rapist at 12. I worked with her until the age of 20. The violence she went through over those eight years was terrible.”

But when the new law came into force in February, it marked a huge change, she says.

In other areas, too, Tunisian women’s rights activists are beginning to see their hard work pay off. Police in Tunisia are required to refer women who report assault to the hospital, where they will be examined by a forensic doctor. These doctors report they have seen an increase in the number of women they see every day. Abir Aissaoui, who works at a hospital in Mahida, a town on the coast, says she sees as many as six patients a week, up from just two. She attributes this not to a rise in violence, but to the fact that women feel more empowered to come forward and that police are also dealing with complaints more appropriately.

Historically, police in Tunisia have largely been part of the problem in the fight against violence against women. Caseworkers say it was common practice for police to convince a victim to drop a complaint, or, in cases of domestic violence, suggest the situation was a private issue for her to sort out with her husband. Under the new legislation, however, police can be jailed for failing to file a complaint.

ATFD’s psychologist Sheifir Telih has also noticed an improvement in police behavior. At the organisation’s shelter in downtown Tunis, Telih gestures passionately as she explains how the legislation has given women more confidence. Before, she says, victims of violence would hesitate to file a complaint because of the stigma. ”The new law makes her feel that it is not up anyone else to judge whether she is a victim or not. If she judges that she is a victim of violence she should fight for her rights.”

Also at ATFD is the office of human rights lawyer Hayet Jazzer, who is now using the law to prosecute. Before the law, she says, there was a “complete lack of seriousness by judges who would deal with violence against women, especially domestic violence,” even in court. “They would say ‘these things happen in marriages’ and encourage the woman to go back to her husband.”

Hayet says she has noticed important though incremental improvements. “Now the procedures are in place, it is a little better, and victims are much more vocal and willing to come forward,” she says, though adds that there is still a long way to go before the judiciary is ready to respond appropriately to the new law.

The Fight to Come

Despite these early signs of progress, an adequate protection system remains a distant dream for activists. Crucially, significant investment is needed for the law to be translated into improved safety for women, but the legislation did not say how the necessary projects will be funded and the 2018 budget does not account for it.

Though the law requires authorities to refer women to shelters if they are in need, it does not set aside money for them. ATFD staff say they are always cash-strapped, but the shelters and day centers that provide safety, as well as legal and psychological support, are crucial for survivors of violence with no other options.

Fatma Hamdr only recently found out about the organization after being physically assaulted by her neighbors for years. From a poor family on the outskirts of Tunis, she makes and sells handicrafts for a living. Adjusting her emerald-green headscarf, she is diminutive but defiant. “I want everyone to hear my story,” she says, explaining how she repeatedly reported the violence to the police, but they never took her seriously. After several complaints, one officer, “got very angry and started hitting me,” she says. When her daughter begged him to stop, telling them Hamdr, who was struggling to breathe, had asthma, he turned on her, hitting her and throwing her to the ground.

Getting the police on board is crucial in implementing any new law. Tunisians say this is especially difficult in a country where the police were used to having extraordinary power under the dictatorship that only fell in 2011 after widespread protests.

But people are trying. Dalenda Largeuche, women’s rights activist, academic and director of Crediff, a government agency, has rolled out training at the police academy for officers about to graduate in which students discuss the concept of human rights, particularly women’s rights. “We encountered resistance at first,” she said. Some police officers would say, ‘women in Tunisia have too many rights already.’ But by the end nearly all came around and many officers said they were interested in further training on the issue.”

Jazzer, the AFTD lawyer, believes the training for police is having an impact. The priority now, she says, needs to be on shifting the mentality of judges, many of whom are strongly opposed to the law. “Marital violence in particular can be hard to prove,” she says, and this allows judges to let abusers go free. ATFD and a handful of other civil rights organizations have rolled out training programs for the judiciary, but so far, they haven’t been able to shift the broader cultural mindset, activists say.

Meanwhile, many women—particularly outside of major cities like Tunis and Sousse—are unaware of their newfound rights. To raise awareness, ATFD has created a cartoon while Article 19 has used concerts, art and workshops nationwide, with an emphasis on explaining legal jargon in simple terms and in local dialects. Student and activist Salma Belhassine has designed an app, to be rolled out later this year, which will allow women to report sexual harassment to NGOs.

While activists are not naïve about the challenges that lie ahead, they remain hopeful and determined. Behladj is still devoted to the women’s rights organization she has been working with since she was a teenager. What inspires her now are the younger women who are joining.

“We are passing the baton,” she says with a smile. “It took thirty years of campaigning to get this law. But it might take us another thirty to really change the situation for women.”

Charlotte Bailey is a journalist specializing in human rights and international development and a contributing reporter with the Fuller Project, a journalism nonprofit reporting on global issues impacting women. 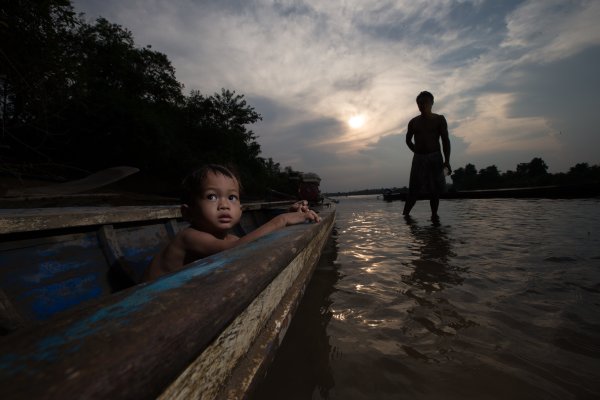