A Swedish woman temporarily prevented the deportation of an Afghan man by refusing to sit down on the plane until he was taken off – and live-streaming her protest on social media.

Elin Ersson posted the 13-minute video on her Facebook page on Monday. By Wednesday, it had been viewed nearly 2.5 million times.

The plane was flying out of Gothenburg, Sweden and appeared to be headed to Istanbul, according to the video. As shouts of “sit down,” emanated from the background, Ersson said that the flight attendants were trying to take her phone away. She also said someone pushed her in an effort to get her seated. When someone in the background told her to sit down and turn off her phone, she replied, “I don’t want a man’s life to be taken away just because you don’t want to miss your flight.”

As people in the background – presumably the flight attendant – continued to tell Ersson to take her seat, she insisted that she would not comply unless the pilot removed the Afghan man from the plane. At one point, a man told Ersson she was “frightening” and appeared to try to grab her phone. The flight attendant gave it back to her.

“I’m trying to change my country’s rules,” Ersson responded to someone who asked why she was delaying the plane. “It’s not right to send someone back to hell.” Halfway through the video, she got emotional, tearfully recounting the passengers on the plane who were supporting. She said a sports team on the flight was also standing.

The video ended with Ersson exiting the plane after explaining that she was being told the Afghan man was being taken off, as well. As she described how the man’s bags were being removed from the flight, a round of applause broke out and Ersson started to cry.

Swedavia, the company that runs Göteborg Landvetter Airport, where the flight was taking off, told the Washington Post that the flight was delayed by 2 hours, but that both Ersson and the Afghan man were taken off the flight.

Ersson’s victory could be short-lived. Swedish authorities told the German media outlet Deutsche Welle that the man was in custody and would be deported at a later date.

Ersson, who is a student at the University of Gothenburg in Sweden, according to her Facebook page, did not immediately respond to request for comment. While she repeatedly stressed her legal right to protest in the video, authorities told Deutsche Welle that Ersson could face fines and up to six months in jail for disobeying a pilot’s orders. 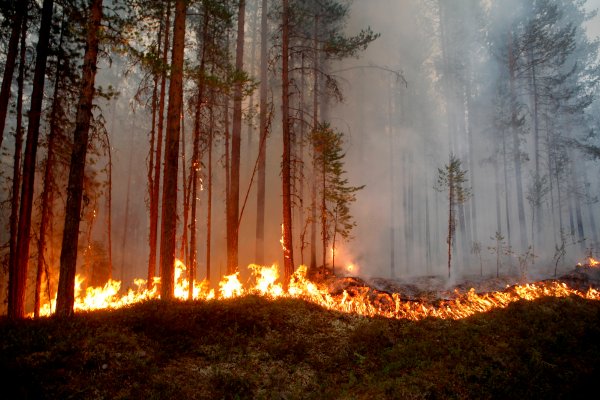 Wildfires Are Burning in the Arctic Circle
Next Up: Editor's Pick