Trump Threatened to Pull His Critics' Security Clearances. How Do They Work?

“They’ve politicized and, in some cases, monetized their public service and security clearances,” she said during the press conference, while also suggesting the former officials have made “baseless accusations of improper contact with Russia.”

But two of the former officials Sanders mentioned don’t currently have clearances to revoke, according to friends and colleagues of the individuals. McCabe’s security clearance was deactivated when he was fired just hours before he was set to retire with full benefits, his spokesperson, Melissa Schwartz, tweeted after the press conference. Comey doesn’t have top secret access anymore either. He was “read out” when he left the FBI, according to his friend and the editor-in-chief of Lawfare blog, Benjamin Wittes.

Security clearances are complex. Here’s how they work:

What is a security clearance?

Security clearances provide government officials and contractors eligibility to access classified information. There are three levels of security clearances: “Top Secret,” “Secret” and “Confidential,” with top secret being the highest designation. Intelligence directors are generally granted top secret clearance, making them eligible to access most of the government’s most protected information when their work requires it. To be granted top secret clearance, individuals undergo Single Scope Background Investigations, which screen financial records, personal relationships, educational backgrounds and criminal records, among other things.

How do you get a clearance?

Individuals cannot apply for security clearances on their own. First, they must be given conditional employment offers by a federal agency or contractor. Then, it must be determined by the Bureau of Human Resources that the position requires access to the protected information. Human Resources then submits forms and questionnaires the individual filled out, on behalf of that individual.

Most individuals who go through the process are ultimately granted security clearances after face-to-face interviews with State Department investigators, though it can take weeks or months.

Who gets granted security clearances?

Only U.S. citizens can be granted security clearances. The sole exception to this rule is when there are “compelling reasons for limited access to be granted” to immigrants or foreign national employees, as outlined by an executive order former President Bill Clinton signed in 1995. Further, to get a clearance, individuals have to be “able and willing to safeguard classified national security information, based on his or her loyalty, character, trustworthiness, and reliability.”

Can clearances be revoked?

Probably, but it’s complicated. Security clearances, as defined by the State Department, provide eligibility for access to classified information and not access to the information itself. Article II of the Constitution provides the Executive Branch the ability to revoke the access itself, according to Lawfare, though the agencies that provided the original security clearances have historically been responsible for stripping clearances, when necessary.

A clause of the aforementioned executive order regarding security clearances states the president can act in interests of national security when situations not mentioned in the order arise.

“The power and responsibility to deny or terminate access to classified information pursuant to any law or other Executive order may be exercised only where the agency head determines that the procedures prescribed in [a subsection] of this section cannot be invoked in a manner that is consistent with national security,” it reads.

But if Trump does intend to carry out his threat, there is not much the other branches of government could do to stop him, according to the Wisconsin Republican.

“This is something that’s in the purview of the executive branch,” he added. 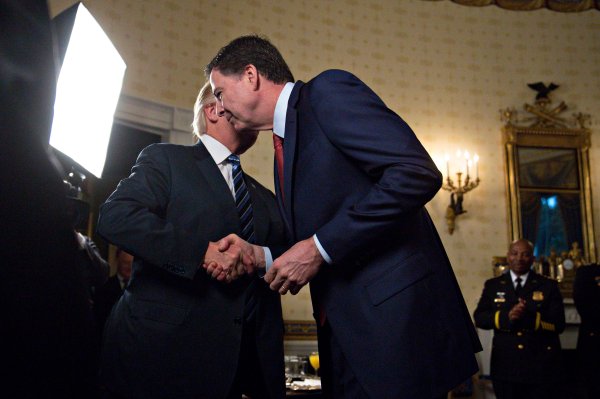