Waves of Garbage Are Covering the Dominican Republic's Beaches in Trash

Plastic water bottles, styrofoam containers and bags gathered on Montesinos Beach in the capital, Santo Domingo, as far as the eye could see. Hundreds of city workers and volunteers joined the effort to combat the trash that washed up after several days of heavy rain.

Sixty tons of waste have reportedly been collected since last week.

While images of the garbage waves hitting Montesinos Beach may be shocking, the phenomenon occurs with regularity.

“It happens pretty much all the time if there is a strong rainfall or a storm,” Cyrill Gutsch, the founder of activist organization Parley for the Oceans, told the Times.

Gutsch stressed that the toll wrecked on the Dominican Republic’s coastline is only a small symptom of a much larger global problem.

“Everybody uses the rivers and the beaches as dump sites,” he said. The majority of that waste does not come back to shore, but gets swept out into the “patches” of waste accumulating in the ocean, where it degrades into possibly toxic particles.

“What you don’t see in the picture is all the toxic stuff,” Gutsch told the Times.

Waste amassing in the seas has become an increasingly visible problem. The Great Pacific Garbage Patch, the ocean’s largest repository of plastic refuse, has swelled to twice the size of Texas. 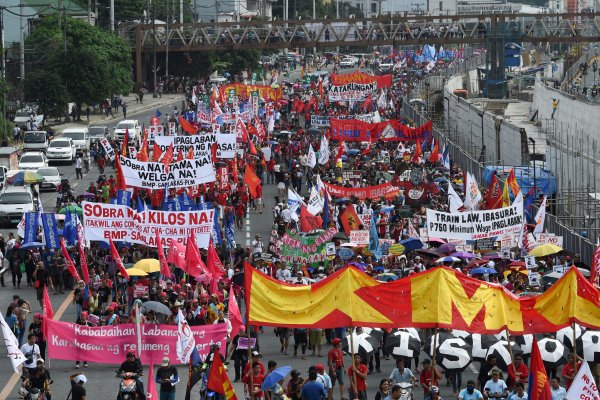 How President Duterte Sparked an Uprising of Filipina Women
Next Up: Editor's Pick