Labourers sit under a wall with a billboard displaying photo of Imran Khan, chairman of the Pakistan Tehreek-e-Insaf political party, during a campaign rally ahead of general elections in Karachi, Pakistan July 22, 2018.
Akhtar Soomro—Reuters
By Sabrina Toppa / Lahore

In the densely-packed Chungi Amar Sidhu neighborhood of Lahore where Ahsan Bhatti lives, the pipelines for water and sewage run together, polluting the area’s drinking supply. At least seven children have died from waterborne diseases in the past month, he says. Today, his working-class area has been plastered with posters for a clean water campaign by the Pakistan Movement for Justice (PTI), the political party led by cricketer-turned-politician Imran Khan. “Most people here are trying to bring someone new into power,” Bhatti says about Khan’s appeal in his constituency. “If I vote, I will certainly not vote for the same people who have been in power for the past five years.”

On Wednesday, nearly 106 million voters will head to Pakistan’s nationwide polls with several key issues weighing on their mind, from a crippled economy, electricity outages, and a worsening water crisis. After four currency devaluations since December, Pakistan’s sputtering economy is grappling with a balance-of-payments crisis, and the new government will look to request relief from the International Monetary Fund or neighboring China — the nation’s No. 1 trading partner. The upcoming election will only be the country’s second democratic power transition, and no prime minister has ever completed a full five-year term of office.

Khan, a populist candidate who has campaigned on a staunch anti-corruption message, is widely seen as the frontrunner, but he will face stiff competition from the incumbent Pakistan Muslim League-Nawaz (PML-N). The party’s top leader, former prime minister Nawaz Sharif, was recently jailed for 10 years on corruption charges after being disqualified from office last year. Critics, however, contend that the charges are politically-motivated and that Khan has the implicit backing of the military establishment that is often seen as running the country.

This month, the Human Rights Commission of Pakistan released a blistering statement, alleging that Wednesday’s vote may not be free, fair, or impartial. “My personal opinion is that one party, PTI, is the favored party of the establishment and they are provided those opportunities which are not provided to other parties,” Mehdi Hasan, chairperson of the Human Rights Commission of Pakistan, tells TIME.

The election has been fraught with concerns about an intense media crackdown and allegations of election engineering, as well as ongoing violence. Earlier this month, an attack at an election rally in southwestern Pakistan killed more than 140 people, one of the deadliest in the country’s history. There are also worries over the deployment of 370,000 security personnel outside polling stations on election day.

A street is decoreated with flags and banner of political parties ahead of general elections in Rawalpindi, Pakistan, July 23, 2018.
Athit Perawongmetha&—Reuters

Not everyone believes there is foul play, however. “The losing side has always taken this position that they were winning and some invisible hand has taken this away from them,” says Rasul Bakhsh Rais, an Islamabad-based political analyst.

Even some PML-N supporters echo this sentiment. “Last election, PTI kept whining about rigging because they lost,” contends 24-year-old PML-N supporter, Abdullah Hayat in Lahore. “This time if they win, it will be free and fair for them — and rigged for someone else.”

Despite corruption scandals, Sharif’s party has trumpeted its work on the energy crisis and infrastructure development — including a $62 billion China-Pakistan Economic Corridor intended to alleviate some of Pakistan’s economic problems — and has gained points among some members of the electorate. “I think PML-N leaders try their best to act on the promises they sell,” says Hayat. “They may not successfully be able to implement it, but I believe they give it their all.”

Others are less enthused about the pro-business party’s emphasis on costly megaprojects, which critics allege are mostly concentrated in Punjab province, rather than outlying provinces that badly need development. “I don’t need this infrastructure as much as our population needs health and education,” says PTI supporter Uzma Khan, a 45-year-old teacher living in Lahore’s Johar Town neighborhood.

Read More: What You Need To Know About Pakistan’s Upcoming General Elections

Imran Khan’s greatest strength has come from his tough talk on corruption, a platform he has championed since 1997. Last year, Khan spearheaded demands for an investigation into Sharif after his family was named in the Panama Papers leak as purchasing several lavish apartments in London through offshore companies. “There is corruption top to bottom, across the board,” says Ahmad Raza, a 55-year-old citizen from Sheikhupura who cites graft as the country’s most concerning issue. Raza’s quest for accountability drew him to Khan, whose rallies he first began attending in 2011.

But as Khan’s campaign has picked up steam, his social platform has taken a decidedly conservative turn that has proven divisive among his previous supporters. “Imran Khan has had to give up on his principles,” says 24-year-old Lahore resident Fahad Rehman, who asked for his real name not be used citing security concerns. Defending the blasphemy law, appealing to religious right-wingers, and recruiting politicians with guaranteed vote banks has tainted Khan’s character and revealed his thirst for political power, he says.

Supporters of Shabaz Sharif, the brother of ousted Pakistani Prime Minister Nawaz Sharif and the head of Pakistan Muslim League-Nawaz attend his campaign rally in Pindi Gheb, in the district of Attock, in the Punjab province, on July 19, 2018.
Aamir Quresh—AFP/Getty Images

Other supporters remain pragmatic about Khan’s strategy: “His stance is just the populist choice — he’s securing his vote,” Raza says. “Even though it’s unlike the Imran Khan of 2013, it’s not a bad political move.”

Sharif supporters, meanwhile, believe the three-time prime minister is enjoying a resurgence in popularity after returning from London, where his wife is receiving treatment for cancer. Speaking with TIME, PML-N information secretary Khawaja Tariq Nazir, likened Sharif’s return and decision to accept jail time to “a political hajj” with the power to redeem his career. “If you perform hajj [the Muslim pilgrimage to Mecca], all your sins of the past are cleared. You are like a newborn baby who has done no wrong. By coming to Pakistan and surrendering himself to the verdict, Sharif has been reborn,” says Nazir.

Read More: Out of the Shadows: Pakistan’s Transgender Candidates Step Onto the Political Stage

With Sharif’s brother Shebaz Sharif running the party, PML-N is now campaigning to protect the sanctity of the ballot. “Sharif is fighting for the supremacy of the parliament and to ensure that the vote the people give to political parties is honored. There should be no state within the state,” Nazir adds.

Regardless of the outcome, Khan is the star player in Wednesday’s contest, and his widening support base is expected to bring broader electoral gains than any previous race. “Now people are much more aware of the Sharif family and their wrongdoings. It’s all out in the open, and whether this was engineered or bad luck, it’s going to help PTI,” says Imran Khan supporter Uzma Khan.

However, should Khan fail to deliver on his promises, she warns that his political fortunes may collapse just as quickly as they’ve risen. “If Imran Khan launders money, evades taxes, and fails to provide a money trail for his assets, I will be the first person to advocate him being sentenced to life imprisonment.” 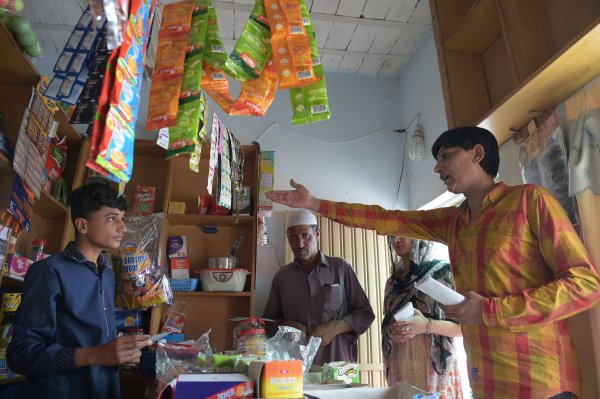