Fox News got an unexpected guest on Fox and Friends First Monday morning.

“I’m actually here to speak directly to Donald Trump,” L’Italien said. “I feel what’s happening at the border is wrong. I’m a mother of four and I believe that separating kids from their parents is illegal and inhumane.”

“I’m actually Barbara L’Italien. I’m a state senator representing a large immigrant community and running for Congress in Massachusetts,” she continued. “We have to stop abducting children and ripping them from their parents’ arms, stop putting kids in cages, and stop making 3-year-olds defend themselves in court.”

“But that practice has stopped at this point, Ms. Kirkpatrick, right?” Schmitt asked.

After repeating her name, L’Italien’s video feed was cut off. Schmitt, still confused said, “Well that didn’t go as planned,” before cutting to commercial.

Soon after the appearance, L’Italien finished her message on Twitter.

“I’ve always fought for vulnerable people, and in Congress I will use every opportunity I have to make sure powerful people like Donald Trump hear their voices. Here’s the full statement I would’ve given Fox News if I hadn’t been cut off.”

According to Desiree Dunne, executive producer of Fox & Friends First, Fox News reached out to L’Italien’s team believing they were contacting Kirkpatrick’s office through Joe Katz, the press contact for congresswoman Kirkpatrick. In a statement Dunne said that Katz “accepted the invitation on Kirkpatrick’s behalf. Katz followed with an email confirming the segment, which also included background information and a campaign logo for Ann Kirkpatrick.”

Referring to the mix up, Anchor Rob Schmitt tweeted Dunne’s statement and said both were “mid-aged white women. Sadly we did not Google their photos prior to segment. Multiple people were lied to.” 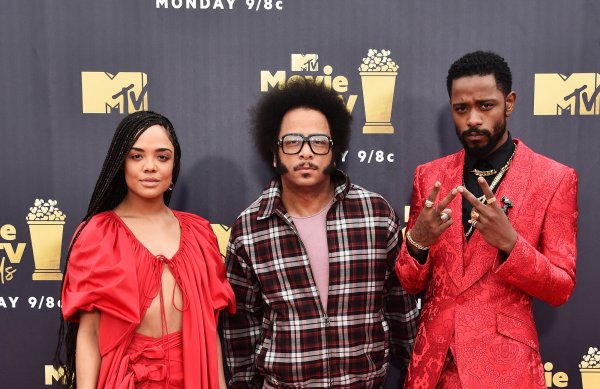 Sorry to Bother You Director Boots Riley on Art, Activism and the Optimism of Fighting Back
Next Up: Editor's Pick