North Korea Is Tearing Down Parts of a Launch Site. Is It a Sign of Things to Come?

The analysis from 38 North, a North Korea-focused website affiliated with Washington-based non-profit Henry L. Stimson Center, found that Pyongyang, in recent days, started tearing down a rail-mounted processing building where rockets are assembled before being moved to a nearby launch pad and a rocket engine test stand.

The dismantlement at Sohae Satellite Launching Station, located near the Chinese border and about two hours’ drive from North Korea’s major facility for producing nuclear bomb fuel, serves as the sole example of North Korea’s willingness to work with the Trump Administration since the landmark summit in Singapore on June 12.

At the conclusion of that meeting, Trump said Kim committed to destroying a major missile engine test site. Trump did not identify the location of the site, but U.S. officials later confirmed it was at Sohae.

Joel Wit, founder of 38 North and a former State Department official, said many of the facilities that are being razed are relatively new and have only been in place within the last two years. For that reason, he believes North Korea is disassembling the facilities as a “confidence-building measure” and a first step toward the Trump Administration’s goal of “denuclearizing.”

The North Koreans “aren’t doing this for any other reason,” Wit said. “I think it’s a significant move, but I don’t want to oversell it. It’s a step in the right direction.”

Sohae is North Korea’s main satellite launching facility, where the nation put satellites into orbit atop powerful rockets in 2012 and 2016. The launches drew international criticism because the technology could also be used with ballistic missiles. The launch in February 2016 was particularly contentious because Pyongyang had conducted a nuclear test just a month earlier.

The North Korean government has maintained that the site is only for scientific and peaceful uses, but U.S. intelligence believes Sohae plays a critical role in testing technology used in their intercontinental ballistic missile (ICBM) program. In recent years, the North Koreans built underground rail tunnels and other buildings that covers the movement of equipment around the launch pad. The U.S. government believed these structures were put in place to hide preparations for launch from orbiting U.S. spy satellites.

The photos, which were captured by commercial satellites between July 20 and July 22, show that dismantlement has begun on a rail-mounted transfer structure on the Sohae launch pad, according to 38 North analyses. Nearby, portions of a vertical engine test stand have been dismantled with paneling removed.

North Korea said it would freeze its ICBM program and, as a goodwill gesture, dismantle the static engine test stand at Sohae, said Jeffrey Lewis, an analyst with the James Martin Center for Nonproliferation Studies Middlebury Institute of Strategic Studies.

“It’s a nice gesture,” he said. “But it doesn’t prevent North Korea from producing more missiles and, of course, North Korean can always resume flight testing.”

The dismantlement is the first sign that North Korea may be willing to raze some facilities associated with its nuclear and missile programs. Earlier this month, satellite images posted online by researchers show North Korea continuing to expand a ballistic missile manufacturing site while also upgrading a separate nuclear facility.

North Korea has also yet to make good on its promise to return the remains of 5,300 service members who died during the Korean War.

The worst sign of deteriorating relations came July 7 when Pyongyang accused the Administration of having a “gangster-like mindset” following U.S. Secretary of State Mike Pompeo’s visit to Pyongyang. The censure was a stark contrast to the Pompeo’s description of the talks as “productive.”

Two days later, Trump tweeted that he had “confidence that Kim Jong Un will honor the contract we signed &, even more importantly, our handshake. We agreed to the denuclearization of North Korea.” 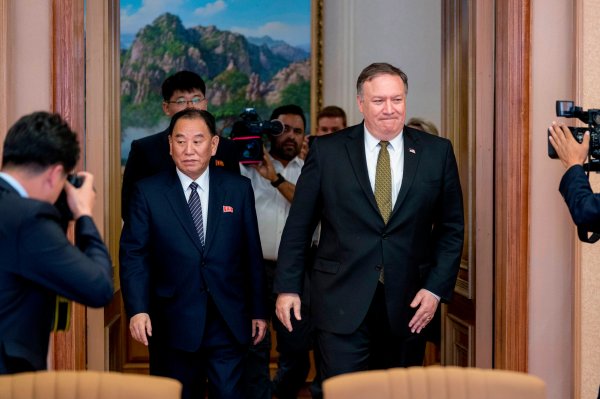 The Trump-Kim Summit Was a Month Ago. Little Has Changed
Next Up: Editor's Pick