Yeni González is one of the mothers who suddenly found herself thousands of miles away from her children this spring, after President Donald Trump’s “zero-tolerance” immigration policy went into effect. In total, more than 2,300 children were separated from their parents in May and June. Trump has since ordered a stop to that practice, and a court has said that migrant families must be brought back together. But while many reunions have taken place, few have captured attention like that of the Guatemalan and her three kids.

A new TIME Red Border Film documentary shows how grassroots activists banded together to transport González from a detention center in Eloy, Ariz., to New York City, where her children were placed at a social service agency after the undocumented family crossed the U.S.-Mexico border and was apprehended by the Border Patrol in May. In addition to raising money for her bond and the trip, volunteers helped the 29-year-old travel across the country.

“How can we humanize this, instead of just seeing a border wall?” Emily Kinskey, a co-producer on the film, says of making a documentary about the contentious policy topic of immigration. “How do we look at this as families?”

Kinskey, who has done work documenting displacement in Central America and the Middle East, started the project after hearing about the vision of Schwietert Collazo, a writer in New York. Collazo had learned about González’s separation from her children — ages six, nine and eleven — on the radio and wondered if she couldn’t organize a network of hosts and drivers to help, given that González did not have the ID or money necessary to fly. Kinskey, who donated $25 to the effort before realizing it was an opportunity for her to pursue as a filmmaker, assembled a team to travel with González for each leg of the four-day trip.

The filmmaker knows that not everyone feels sympathetic toward people who are attempting to enter the country without following the rules. “There may be people who would rather drive her back the other way across the border,” Kinskey says. But she believes there is a lesson to be learned about America in seeing how the network of volunteers materializes across red and blue states alike.

While supporters have applauded Trump’s promises to vigorously enforce immigration laws, the family separations proved unpopular with many Democrats and Republicans alike and inspired a burst of grassroots activism; one viral Facebook campaign aimed at reuniting families raised nearly $20 million in less than one week.

The court-ordered reunifications have proved difficult for the government in many cases. On Monday, the Trump Administration released figures suggesting that more than 460 of the parents separated from their children may have already been deported. More than 100 parents, according to a court filing, have waived the right to be reunited with their children. While the American Civil Liberties Union has suggested that parents facing deportation might “mistakenly strand” their children, some have come to the painful conclusion that their children will have a better life with family members in the U.S.

The effort to connect González and her children is one that proved fruitful. After an emotional journey and about six weeks apart, the four of them reunited at a children’s center in Manhattan on July 3. More than a week later, after going through the official process of having them released into her custody, the family emerged together from the building to be greeted by a scrum of reporters who had been following the case. In her remarks, González acknowledged other mothers who had been detained with her, as well as Collazo, who founded a group called Immigrant Families Together that continues to pursue this work.

At one point in the film, González mentions critics who say that parents like her knowingly expose their children to the risks and trauma of being separated. Speaking in Spanish, she says she had no idea that her children might be taken away from her when they crossed the border and that people sometimes “say things” because they don’t understand the suffering of immigrants.

According to her immigration lawyer José Xavier Orochena, González fled Guatemala because of violence that has plagued the country for years. He says that gangs were attempting to recruit her eldest son, who is eleven, and that “fending off” violent young men was proving too difficult for the single mother. He was hired by family members that González has in North Carolina, where the family is now living as González begins the long process of pursuing an asylum application.

It’s a procedure that will likely take years, Orochena says, and involve the difficult task of gathering evidence about events that took place in Guatemala before the mother brought her family to America. “We have a lot of work to do,” he says. 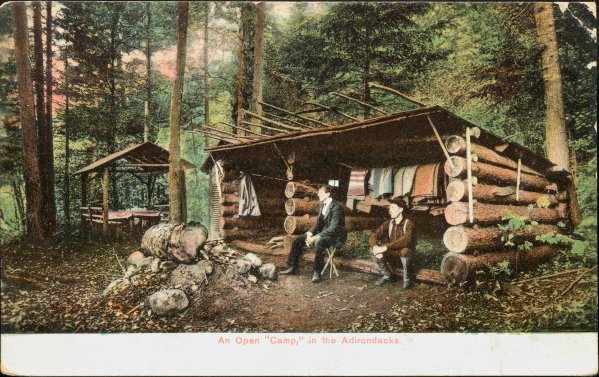 How to Live ‘Amid the Silence of the Woods,' According to America’s First Camping Guide
Next Up: Editor's Pick