President Trump Is Considering Revoking Security Clearances of His Critics

President Donald Trump is considering revoking the security clearances for a half-dozen former high-level intelligence and national security officials who have criticized him, the White House said Monday afternoon.

“The President is exploring the mechanisms because they politicize and in some cases monetize their public service,” Sanders said, explaining why Trump is looking at what power he has to revoke the clearance of a former officials.

Speaking to CNN after the press conference, former Director of National Intelligence James Clapper said that the president has the authority to revoke the clearances, but that doing so because of his statements was “a very, very petty thing to do” and an “abuse of the system.”

“It’s kind of a sad commentary where for political reasons this is kind of a petty way for retribution for spekaing out against the president, which on the part of all of us are borne out of genuine concerns about President Trump,” he said.

Hayden tweeted that losing a security clearance would not affect him much.

“I don’t go back for classified briefings,” he wrote. “Won’t have any effect on what I say or write.”

The idea may have come from Republican Sen. Rand Paul of Kentucky, who criticized Brennan on Monday morning, arguing that he was “monetizing his security clearance” with attacks on Trump.

Paul confirmed in a tweet on Monday that he had met with Trump and had urged him to revoke these clearances. “Public officials should not use their security clearances to leverage speaking fees or network talking head fees,” he tweeted.

Julian Zelizer, a presidential historian at Princeton University, believes Trump is considering the action to punish former officials who have been critical of him as well as silence officials currently serving in his administration who may consider being critical of him down the road. “It’s another example of punitive politics,” Zelizer said. Trump is likely sending a “general message” to officials that “he will push hard and not allow them to [criticize him] without retribution.

Clapper and Hayden, both former Republican appointees, have written books arguing that Trump is fueling distrust of U.S. intelligence agencies in order to consolidate his own power, hurting American democracy in the process. They have also been vocal on social media and in interviews about their views on Trump.

Brennan, who was appointed by President Barack Obama, has also been outspoken in his criticism of Trump, arguing after the recent joint press conference with Vladimir Putin that Trump had met the constitutional threshold for impeachment. A spokesman for Brennan did not issue an immediate comment.

McCabe’s spokesperson Melissa Schwartz tweeted after the press briefing that his clearance had been terminated when he was fired in March, which they were told was FBI policy. You would think the White House would check with the FBI before trying to throw shiny objects to the press corps…” she tweeted. And Benjamin Wittes, editor in chief of the website lawfare and a friend of Comey’s, said he texted the former FBI Director after the briefing, who told him he too no longer had one due to longstanding policy – and had declined a temporary one earlier in the year to read the inspector general’s report on Hillary Clinton’s e-mail investigation. 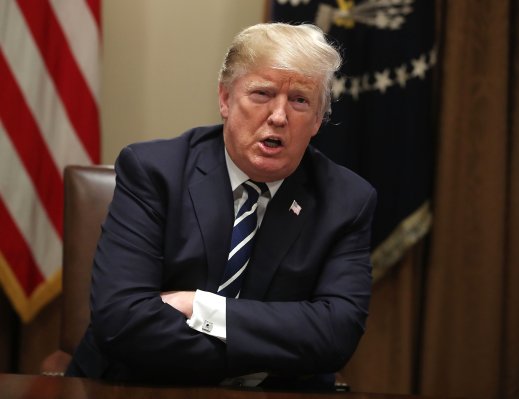 President Trump Keeps Falsely Saying He Was Exonerated
Next Up: Editor's Pick