Why Are So Many Migrants Leaving Guatemala? A Crisis in the Coffee Industry Is One Reason

Leutert is the Director of the Mexico Security Initiative at the Robert S. Strauss Center for International Security and Law. She works on issues related to U.S.-Mexican relations, Mexican security, and Central American migration.

Rows of dark green coffee plants line the winding roads leading up to the town of San Pablo in the Guatemalan highlands, extending across the hills. Coffee is the main source of income for people in this part of the country. Most residents here grow and care for their own coffee plants, have grandparents and parents who produced coffee, and are now passing that knowledge on to their children. “You have two options in this part of Guatemala: grow coffee or migrate,” says Cipriano Juventino Niz Chilel, the president of the Entre Rios coffee cooperative in San Pablo.

For over a century, the residents in these mountainous towns have frequently chosen the first option, boosting Guatemala’s position in the global coffee markets. But in recent years, a crisis in the sector has deepened—thanks to low global coffee prices, booming production in countries such as Honduras and Vietnam, and recurring coffee plagues. As the industry struggles to stabilize, rural Guatemalans in the highlands can no longer rely on coffee as a secure income source. Increasingly, they are choosing to leave for the United States.

Over recent months, Central American migrants heading to the United States and the Trump administration’s zero tolerance policies aimed at deterring migrants, have captured headlines around the world. But today’s migration from Guatemala, which has a population of 16.5 million, is just the latest phase in three decades of human movement. In the 1980s, hundreds of thousands of Guatemalans left their homes as refugees fleeing a particularly brutal period of the country’s civil war. In the 1990s and 2000s, more migrants headed north, leaving behind economic crisis, grinding poverty, and natural disasters. Today, Guatemalans migrate for various reasons, including to reunite with family members, flee gang violence, particularly by Mara Salvatrucha (MS-13) and the Barrio 18 groups, or escape endemic domestic or family violence.

In Guatemala’s western highlands, a range of factors are driving migration. The area reports high rates of violence against women, and there are few resources for victims or avenues for legal recourse. Towns across the region also frequently lack basic medical services, higher education options, or well-maintained infrastructure. A long and violent history of discrimination against the local indigenous communities—culminating in genocide during the country’s 36-year civil war from 1960 to 1996—still creates the foundation that pushes many to leave.

Guatemala Sends More Migrants to the U.S. Border Than Any Other Country. Will Sunday's Elections Change That?

Trump’s Deadline for an Asylum Deal With Mexico Is Monday. Here’s What We Know

But there is now one more explanation for the region’s current economic despair and migration: the crisis in the country’s coffee industry.

Indigenous Mayan Mam-speaking women drink coffee after a group meeting on February 12, 2017 in Cajola, Guatemala. Women are especially affected by emigration. In Cajola, in the highlands of western Guatemala, some 70 percent of the men have emigrated to the United States to work, many leaving behind wives and children who barely know their fathers.
John Moore—Getty Images

Guatemala is now synonymous with high-quality coffee, but the plant is not native to the country. In the 1700s, Jesuits brought the first coffee plants to Guatemala as a decoration for their monasteries in the city of Antigua. In the mid-1800s, people began to cultivate the crop, including across the highlands, where the temperate climate and fertile soil proved ideal for its production. Landowners employed indigenous workers from the highlands in large plantations, maintaining the unequal economic and social system that remains in place today. It was a mode of production that put Guatemala on the map when it came to coffee, and by the 1990s and throughout the 2000s, Guatemala was the world’s fifth largest coffee producer, trailing regional giants Brazil and Colombia.

But in recent years, Guatemala’s coffee sector has periodically struggled compared to some of its international peers. Coffee rusts have decimated the sector, with warmer temperatures spreading the disease to higher altitudes. Beginning in 2011, an aggressive bout of rust wiped out an estimated 20 percent of the region’s coffee production, attacking the highest-quality Bourbón and Caturra varieties. At the same time, climate change has also increased the frequency of droughts, floods, and cold shocks, which can decrease, or at times completely destroy, production.

Yet, despite the environmental problems, the sector’s most significant challenge is the low global coffee price. From 2010-2012, the price of Guatemalan coffee reached over $170 and $180 a quintal (approximately 100 lbs), granting producers a windfall when they sold their crops to exporters. Soon after, the price began to slide downward, falling to below $110 today, partly because of a strong harvest in Brazil and from the other producers with lower production costs. For Guatemalan producers, these global prices are no longer sustainable, falling below the investment it takes to grow and harvest the coffee beans. And since daily wages on the coffee plantations are already at 35 to 40 quetzales (approximately $5), it is difficult to cut costs further.

These low coffee price and bottomed out salaries have decimated jobs for Guatemalans in the country’s highlands. In El Nuevo Palmar, Quetzaltenango—a municipality with one of the country’s highest rates of outward migration for families and unaccompanied children according to the U.S. Customs and Border Patrol data—the lack of jobs and low coffee production salaries have crippled employment opportunities in the area. “We may not exist next year,” members of the municipality’s council joked darkly during the July monthly meeting, “since everyone will be in the United States.” In previous years, young men from El Nuevo Palmar would often migrate to Guatemala City, but the city’s low wages and high crime levels have increasingly made the United States seem like the better option. Residents now sell land or take out a loan to send family members to the United States, where they believe they have a better chance of earning more money and staying safe.

Coffee producers are attempting to mitigate the low prices through a variety of strategies. Larger plantations are dividing and selling off parts of the land as they attempt to wait out the price downturn; other producers are abandoning coffee and switching to other crops. “The advice we are currently giving to coffee producers is to diversify,” said Jaime Rolando Lopez Castillo, the coordinator in the regional Coatepeque, Quetzaltenango office of Guatemala’s National Coffee Association (ANACAFE), “and that’s into other crops beyond coffee.” These replacement crops—including bananas, plantains, and macadamia nuts—may help tackle the employment crisis. But they will not solve it entirely, since these crops require fewer workers than coffee.

A final factor affecting the local economy is the Mexican peso’s steady devaluation. For decades, Guatemalans from the highlands would travel to the southern Mexican state of Chiapas, which borders Guatemala, to work in coffee farms. However, as the peso weakened, Guatemalans began to earn fewer quetzales when it was time to convert the earnings and bring home their salaries. In 2000, for every 100 Mexican pesos that a Guatemalan worker earned, he or she could convert it into roughly 80 quetzales; in 2010, these 100 pesos could only be converted to 60 quetzales; and today they total just 39 quetzales. After factoring in transportation costs, these annual trips to Chiapas are no longer always profitable for Guatemalans who live far away from the border.

In 2012, Cipriano Juventino Niz Chilel, the coffee cooperative president from San Pablo, had also joined previous waves of Guatemalan migrants to work in construction and landscaping in Phoenix, Arizona. The money he made during his three years in the United States now helps to tide his family over amid the low coffee prices. But many of his neighbors and fellow coffee producers lack these savings. For these residents of the Guatemala highlands, losing their livelihood in the struggling coffee sector leaves them with little choice but to pack up and abandon their farms. As the coffee industry slowly disappears without any alternative to take its place, Guatemalans who have relied on this line of work for generations will continue to join migrants from across Central America who are heading north, searching for a future beyond producing coffee. 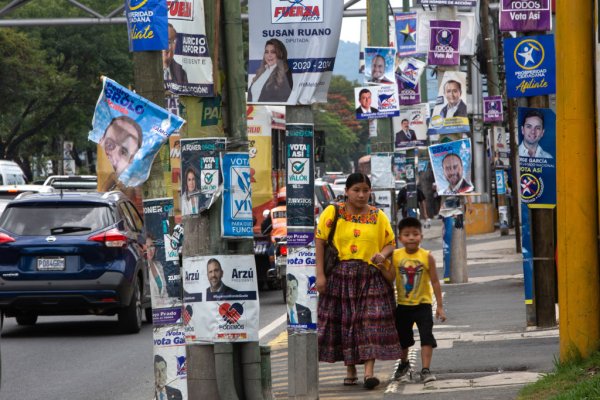 Guatemala Sends More Migrants to the U.S. Border Than Any Other Country. Will Sunday's Elections Change That?
EDIT POST