U.S. President Donald Trump tweeted an all-capitals warning to Iranian President Hassan Rouhani late Sunday night: “NEVER, EVER THREATEN THE UNITED STATES AGAIN OR YOU WILL SUFFER CONSEQUENCES THE LIKES OF WHICH FEW THROUGHOUT HISTORY HAVE EVER SUFFERED BEFORE.”

“WE ARE NO LONGER A COUNTRY THAT WILL STAND FOR YOUR DEMENTED WORDS OF VIOLENCE & DEATH,” the President added.
“BE CAUTIOUS!”

Trump’s tweet appears to have been sparked by Rouhani’s earlier address to a group of Iranian diplomats, during which he warned that “war with Iran is the mother of all wars.”

“Mr. Trump, don’t play with the lion’s tail, this would only lead to regret,” Rouhani said, according to Reuters, citing Iranian state news.

Rouhani’s message came amid rising tensions between his country and the United States. Trump recently withdrew the U.S. from an Iranian nuclear deal forged by his predecessor, President Barack Obama, along with the leaders of the United Kingdom, France, and other major international powers. The deal called for the lifting of economic sanctions against Iran in exchange for the curtailing of Tehran’s nuclear program.

Trump, long critical of the arrangement, backed out of it in May, calling it “decaying and rotten.” Rouhani and Iran’s Supreme Leader, Ayatollah Ali Khamenei, have amplified their criticisms of Trump and the United States ever since.

In his address to reporters on Sunday, Rouhani also held out the option of peace with the U.S., state media reported. “America should know that peace with Iran is the mother of all peace,” he said. Still, he also criticized what he characterized as American efforts to destabilize Iran’s government, saying that the U.S. is “not in a position to incite the Iranian nation.”

Speaking to a group of Iranian-Americans at the Ronald Reagan Presidential Library on Sunday, U.S. Secretary of State Mike Pompeo called Iran’s government “a mafia.” In a speech sharply critical of Iran’s leaders, Pompeo said that the U.S. would make efforts to broadcast to Iranians in Farsi, circumventing the country’s censorship laws, according to The Independent.

The U.S. is set to reimpose economic sanctions on Iran in coming weeks, which will likely cause new problems for the country’s struggling economy. Investors have already started to withdraw over fears of being sanctioned, Bloomberg reports. 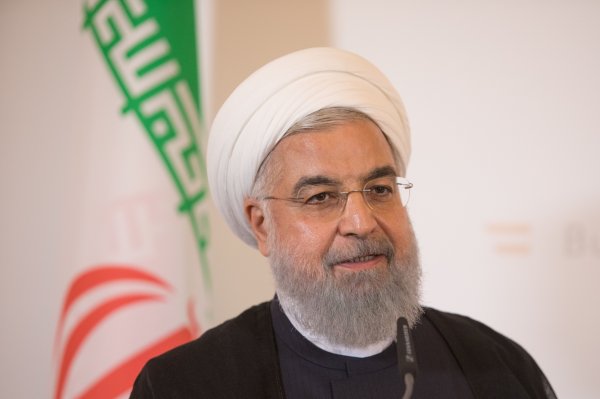 Iranian President Warns Trump Not to Threaten Oil Exports
Next Up: Editor's Pick