Kavanaugh Once Thought the Supreme Court's Nixon Decision Might Be 'Erroneous'

Kavanaugh’s comments came in a lawyer roundtable sponsored by The Washington Lawyer almost two decades ago, and published in the January/February 1999 edition of the magazine.

“Maybe Nixon was wrongly decided — heresy though it is to say so,” Kavanaugh said. “Maybe the tension of the time led to an erroneous decision.”

The Washington Lawyer article was included within thousands of pages of speeches, testimony and court filings Kavanaugh provided to lawmakers Friday as they prepared to consider his nomination. It’s likely to draw questions from Democratic lawmakers already asking how Kavanaugh would handle a potential case involving President Donald Trump.

The documents also show Kavanaugh predicted two decades ago that the court would soon embrace a color-blind view of the Constitution, an approach that could outlaw affirmative action.

The 1974 United States v. Nixon ruling unanimously rejected the president’s claim that executive privilege protected him from having to release the tapes to a special prosecutor.

Some of Kavanaugh’s remarks in the roundtable may have been aimed at provoking debate. At one point, he asked whether the Nixon case might have been a “nonjusticiable interbranch dispute” that the Supreme Court should have sidestepped.

Kavanaugh said the president, not the attorney general, is the country’s “chief law enforcement officer.”

‘Implications to This Day’

“Nixon took away the power of the president to control information in the executive branch by holding that the courts had power and jurisdiction to order the president to disclose information in response to a subpoena sought by a subordinate executive branch official,” Kavanaugh said. “That was a huge step with implications to this day that most people do not appreciate sufficiently.”

In a separate article Kavanaugh wrote in 1998 — before the symposium — he suggested he supported the Nixon ruling. Kavanaugh called on Congress to “codify the current law of executive privilege,” including the Nixon decision.

Kavanaugh’s views on the Nixon case could become important in the investigation by special counsel Robert Mueller into Russian meddling in the 2016 election and possible obstruction of justice.

Kavanaugh’s affirmative action comment, made during an interview with the Christian Science Monitor, came in advance of a Supreme Court argument over an unusual Hawaiian voting rule. Kavanaugh filed a brief urging the court to strike down the rule, which barred non-natives from voting for the trustees of a fund that benefited descendants of the islands’ early inhabitants.

“This case is one more step along the way in what I see as an inevitable conclusion within the next 10 to 20 years when the court says we are all one race in the eyes of government,” Kavanaugh told the newspaper. The high court later struck down the system 7-2.

More recent rulings have reaffirmed the rights of universities to use affirmative action as an admissions factor to foster student-body diversity. The issue could return to the Supreme Court soon, possibly with a lawsuit that claims Harvard University’s admissions policies discriminate against Asian-Americans.

In a questionnaire submitted to the Senate panel that will consider his nomination, Kavanaugh said another racial discrimination case was among his 10 most important appeals court rulings because of “what it says about anti-discrimination law and American history.”

The 2013 case involved a black man who was fired from the U.S. government-sponsored mortgage provider Fannie Mae after accusing a company vice president of referring to him using a racial slur. A three-judge panel reinstated the lawsuit.

In a separate opinion, Kavanaugh wrote that a single use of that word by a supervisor was enough to permit a discrimination lawsuit claiming a hostile work environment.

“No other word in the English language so powerfully or instantly calls to mind our country’s long and brutal struggle to overcome racism and discrimination against African-Americans,” he wrote.

Kavanaugh, 53, also revealed that he received a phone call from White House Counsel Don McGahn only hours after Justice Anthony Kennedy announced plans to retire on June 27. Kavanaugh said he met with President Donald Trump five days later, on July 2, and was offered the nomination during another in-person meeting with Trump on July 8. The president made his selection public at a White House event the following evening.

Completion of the questionnaire is a key step in Kavanaugh’s confirmation process, but a bigger battle remains over records from his extensive career. Senate Judiciary Committee Chairman Chuck Grassley of Iowa and Senator Dianne Feinstein of California, the top Democrat on the committee, still haven’t agreed on terms for a document release request spanning Kavanaugh’s years on the Kenneth Starr probe into Bill and Hillary Clinton, and at President George W. Bush’s White House.

Senate Democrats are delaying one-on-one meetings with the nominee until that matter is resolved. Republican leaders in recent days began accusing Democrats of seeking too-extensive a volume of documents in order to drag out a confirmation that the GOP wants completed well before the November mid-term elections.

On Friday, 100 progressive groups sent a letter to Grassley and Feinstein, calling on them to delay confirmation hearings until some 1 million pages of documents are released and made public for review. Signatories included NARAL Pro-choice America, Demand Justice, and the American Civil Liberties Union. 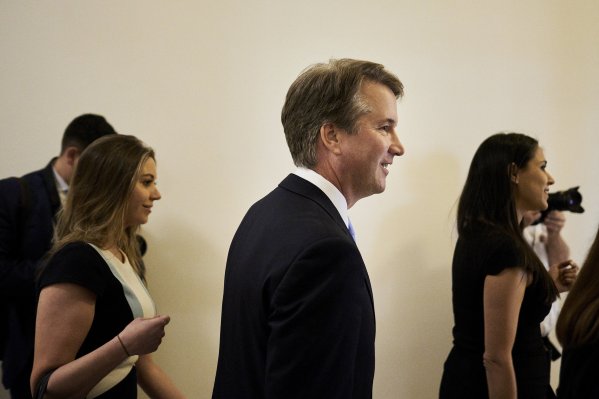 How the First Amendment Became a Tool for Deregulation
Next Up: Editor's Pick