If you ever find yourself wondering how Jon Stewart has been filling the hours since he left The Daily Show (when he’s not crashing Stephen Colbert’s show), Jimmy Kimmel figured it out. On Thursday, Kimmel Live took to the Hollywood Walk of Fame to ask some of the superheroes who work there for Comic-Con cosplay tips. He spoke to a Superman and Spider-man about how to prevent chaping, but when he interviewed The Incredible Hulk he got a big surprise.

Turns out that Stewart has been spending his days dressed as Bruce Banner’s alter-ego, snapping photos with tourists seeking souvenirs during their Hollywood vacations. The former talk show host informed Kimmel that he had been working as a street performer in Hollywood since leaving the Comedy Central show. Stewart isn’t doing it for the money, though, because when asked if he was making good money in tips, Stewart admitted it wasn’t a great way to earn cash. He doesn’t care, though, because he is doing it for the kids and “the sparkle in the little boy’s eye when he hears the sound of the Hulk flying in the Hulkocopter.” When Kimmel balks that there’s no such thing as a Hulk-o-copter, Stewart warns that he is getting mad and Kimmel wouldn’t like that.

Stewart may be rocking his green six-pack abs, but he doesn’t let his new super powers or the title of “Incredible” go to his head. “I wouldn’t say incredible, but adequate,” says Stewart in the clip. “I play an adequate Hulk.” 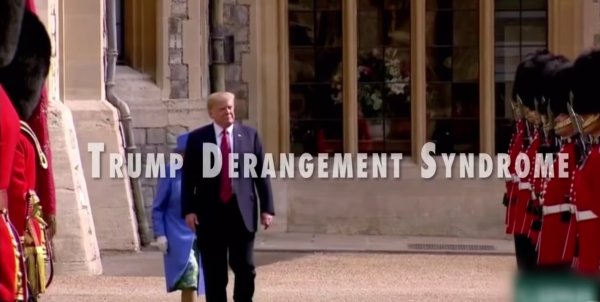 Jimmy Kimmel Thinks He Found the Miracle Drug for 'Trump Derangement Syndrome'
Next Up: Editor's Pick