17 Dead: The Latest on the ‘Terrible Tragedy’ of the Branson Duck Boat Sinking

By Michael Zennie and Katie Reilly

Seventeen people are dead after an amphibious duck boat with tourists on board sank in a heavy storm near Branson, Missouri on Thursday.

The boat, from Ride the Ducks Branson, was one of two vessels caught in a heavy storm that rolled into the area about 7 p.m. local time. Videos posted on local media showed two boats struggling to make it to shore on Table Rock Lake amid heavy windy and choppy waters.

There were 31 people – 29 passengers and two crew members – aboard the capsized boat, according to the Stone County Sheriff’s Office. At a press conference Friday morning, Stone County Sheriff Doug Rader said the driver of the duck boat died in the accident, but the boat’s captain was among the survivors. He said an off-duty sheriff’s deputy working on security for the nearby Branson Belle riverboat in Table Rock Lake helped to rescue people in the water after the accident.

“It’s been a long night and a very trying night,” Rader said.

Seventeen people have been confirmed dead, including children. Fourteen survived, with seven taken to hospital. Those who died ranged in age from 1 to 70 years old, according to Missouri State Highway Patrol Sgt. Jason Pace.

Rader said Friday morning that he did not have more information about whether the boat operators had checked the weather forecast before leaving shore or whether passengers had been wearing life jackets on board.

The National Transportation Safety Board has dispatched a team to investigate the cause of the accident.

“Right now, it’s just a time for thoughts and prayers. There’s a lot of healing that has to take place right now,” Missouri Governor Mike Parson said at Friday’s press conference. “All those details will come in time, but for right now, it’s about really trying to protect the families, to unite the families and to deal with the situation they’re in. I think that’s the most important thing.”

Who are the victims of the duck boat accident?

The Stone County Sheriff’s Office on Friday released the names of the 17 victims. They include nine members of the same family, a couple from St. Louis, a couple from Higginsville, a father and son from Arkansas and a grandmother who died saving her granddaughter, according to local media reports. The boat’s driver, Bob Williams, was also among the deceased.

Why did the duck boat sink?

“They were coming back to land. There were actually two ducks. The first one made it out and the second one didn’t,” Rader said at a press conference Thursday night.

Video posted to the Springfield News-Leader showed the two boats struggling to make it to shore in heavy wind and waves. Onlooker Jennie P. Carr, who was on the Branson Belle Showboat as people had dinner, recorded footage of the boat’s nose sinking below the water. The camera turned away before the boat sank.

“It got closer to us on the Showboat and you could see water going into the boat. I did see he was starting to sink. It was leaning to the right,” she told the newspaper.

She said the boat was out of sight when it sank.

What is the duck boat operator saying?

On Friday morning the operators’ website was replaced by an image of a black ribbon, with a statement reading: “We are deeply saddened by the tragic accident that occurred at Ride The Ducks Branson. This incident has deeply affected all of us. Words cannot convey how profoundly our hearts are breaking.”

It continued, “We will continue to do all we can to assist the families who were involved and the authorities as they continue with the search and rescue. The safety of our guests and employees is our number one priority. Ride the Ducks will be closed for business while we support the investigation, and to allow time to grieve for the families and the community.”

“Thank you for your support, and we ask that your thoughts and prayers be with the families during this time.”

Have there been other fatal duck boat accidents?

In 1999, a duck boat on Lake Hamilton, Arkansas, sank, drowning 13 of its 21 passengers. After that incident, the National Transportation Safety Board said the roof canopy of the boat was to blame, after finding four of the victims pinned against the roof at the bottom of the lake. Three more were also trapped inside the boat.

In 2015, a duck boat collided with a charter bus on a bridge in Seattle, killing five people and injuring 69. And in 2016, a duck boat in Boston struck and killed a motorist, sparking a debate over the vessels’ safety.

What is a duck boat?

A duck boat is the colloquial name for an amphibious vehicle that can operate on land and in the water. The vehicles are based off a military design first used during World War II. They are now a common vehicle in lake tours around the world.

Ride The Ducks Branson was acquired by entertainment giant Ripley in December 2017.

Missouri Governor Mike Parson ordered all flags at government offices in the state to be flown at half-staff for a week to honor the victims of the boating accident.

President Donald Trump tweeted his condolences to the victims of the accident, saying “My deepest sympathies to the families and friends of those involved in the terrible boat accident which just took place in Missouri. Such a tragedy, such a great loss. May God be with you all!”

Write to Michael Zennie at michael.zennie@time.com and Katie Reilly at Katie.Reilly@time.com. 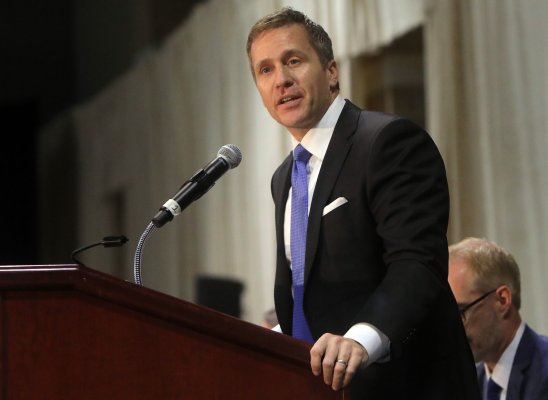 Amid a Flurry of Signings and Pardons, Missouri Gov. Eric Greitens Officially Resigns From Office
Next Up: Editor's Pick