A mysterious black sarcophagus discovered in Egypt two weeks ago has been opened by archaeologists, according to Egypt’s Ministry of Antiquities, revealing three skeletons and foul-smelling sludge.

Reddish-brown sewage water inside the massive 2,000-year-old tomb weighing 27 tons, unearthed at a construction site, gave off a stench so pungent that initial prying efforts had to be abandoned.

“We found the bones of three people, in what looks like a family burial,” said Mostafa Waziri, secretary-general of the Supreme Council of Antiquities, according to the BBC. “Unfortunately the mummies inside were not in the best condition and only the bones remain.”

At almost 6.5 feet high and 10 feet long, the structure is the largest of its kind ever found intact, the BBC reports. The tomb is believed to date back to the early Ptolemaic period, which began in 323 BC after the death of Alexander the Great.

Read more: A Mysterious Sarcophagus That May Not Have Been Opened in 2,000 Years Was Found in Egypt

According to the Ministry of Antiquities, the three skeletons inside the sarcophagus may have been soldiers. One cracked skull reportedly indicates an arrow injury.

Addressing concerns that examining the tomb could unleash a Pharaoh’s curse, Waziri said, “We’ve opened it and, thank God, the world has not fallen into darkness,” the BBC reports.

“I was the first to put my whole head inside the sarcophagus… and here I stand before you … I am fine,” he added.

The skeletons will be transferred to the Alexandria National Museum for restoration and further study. 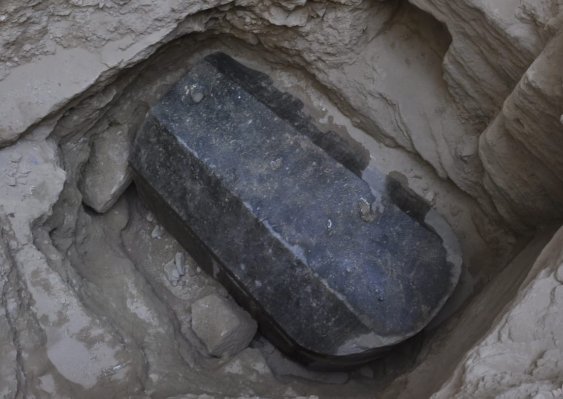 A Mysterious Sarcophagus That May Not Have Been Opened in 2,000 Years Was Found in Egypt
Next Up: Editor's Pick