Here Are All the Best Trailers From Comic-Con 2018

With the Marvel Cinematic Universe, Star Wars movies and Game of Thrones all opting out of the San Diego Comic-Con this year, DC superheroes and Harry Potter characters ruled the pop culture convention. Despite disappointing box office returns for Justice League, Warner Bros.’ DC Extended Universe presented a promising future at Comic-Con. Fans cheered for scenes of Wonder Woman checking out an 80s mall in exclusive footage from her next movie, Wonder Woman 1984. They also got a first look at Shazam and Aquaman.

Warner Bros. dropped a trailer for Fantastic Beasts: The Crimes of Grindelwald, which featured the first onscreen appearance of Harry Potter character Nicholas Flamel. They also previewed the next Godzilla movie, featuring a host of monsters and Stranger Things’ Millie Bobby Brown.

The weekend rounded out with a few spooky trailers, including M. Night Shyamalan’s new superhero film Glass. Plus, fans got to see new footage from of the new Doctor Who (played by Jodie Whitaker), zombies from the new season of Walking Dead and a preview of Julia Roberts’ first television series, Homecoming.

Fantastic Beasts: The Crimes of Grindelwald

A trailer for the Fantastic Beasts sequel promises a huge expansion of the wizarding world. The footage offered fans their first look at Nicholas Flamel, the owner of the Sorcerer’s Stone featured in the first Harry Potter book. Newt Scamander (Eddie Redmayne) encounters him while presumably on a mission for young Dumbledore (Jude Law) in their battle against Grindelwald (Johnny Depp).

After making his big-screen debut in Justice League, Jason Momoa’s Aquaman is getting his own film. Aquaman, the rightful king of the Seven Seas has to challenge his brother to battle in order to prevent him from waging war on land.

Fans were shocked and delighted when M. Night Shyamalan’s Split turned out to be sort-of sequel to Unbreakable. Now all three of the would-be superheroes and super villains from those two films—James McAvoy’s The Beast, Bruce Willis’ David Dunn and Samuel L. Jackson’s Mr. Glass—are under the care of a doctor played by Sarah Paulson in Shyamalan’s creepy superhero movie Glass.

The surprisingly funny trailer for Shazam previews a Big-meets-superhero plot. Zachary Levi stars as a foster kid who with the words “Shazam” can transform into a full-blown adult superhero.

The long-running BBC America series returns with a new hero. Twelve different eccentric white dudes took on the role of the Doctor. But this fall, Jodie Comer makes her debut as the first female Doctor Who. It’s about time!

The new trailer for the ninth season of The Walking Dead previews power struggles among the survivors. Killing zombies looks to be the least of their problems.

Julia Roberts is finally heading to television. She’s starring in Amazon Prime’s adaptation of the uber-popular fictional podcast Homecoming as a social worker tasked with helping veterans transition back to civilian life. Mr. Robot creator Sam Esmail is directing the first episode, and the trailer previews his eerie aesthetic.

Tig Notaro joins the Star Trek: Discovery cast for season two, as does Anson Mount as the new captain of the Discovery. The central mystery of the season seems to be centered on some sort of distress signal sent by fan favorite Spock.

Simpsons creator Matt Groening is taking his talents to Netflix with Disenchantment, a twist on your typical fairytale. The show stars Broad City’s Abbi Jacobson as Princess Bean, who jilts her would-be prince to find herself. (He winds up with his head impaled on an Iron Throne.)

Despite tepid reviews, Iron Fist is returning for a second season on Netflix. The creators promised a revamped show on the panel with a new emphasis on fight choreography. Danny Rand returns with his fist of fire in a trailer that promises plenty of punching.

Preacher remains the craziest comic book adaptation on television as it enters its third season. The new Comic-Con teaser trailer includes scenes of Hitler working in a diner and gross-out looks at Allfather.

The DC superheroes from cartoons Teen Titans and (more recently) Teen Titans Go! are getting a gritty live-action adaptation. In the first trailer for Titans, Robin uttered the words that shook Comic-Con: “F-ck Batman.”

Better Call Saul announced at Comic-Con that the new season will introduce a character referenced in Breaking Bad but never seen onscreen, Lalo. In season two of Breaking Bad, Walt and Jesse mask themselves and hold Saul at gunpoint. Saul, guessing at their identities asks if Lalo sent them. It was a throwaway line at the time, but now fans will get the backstory between Lalo and Saul.

Another George R.R. Martin adaptation is headed to television. The space drama Nightflyers may tide over Game of Thrones fans while they wait for the final season of the fantasy show. 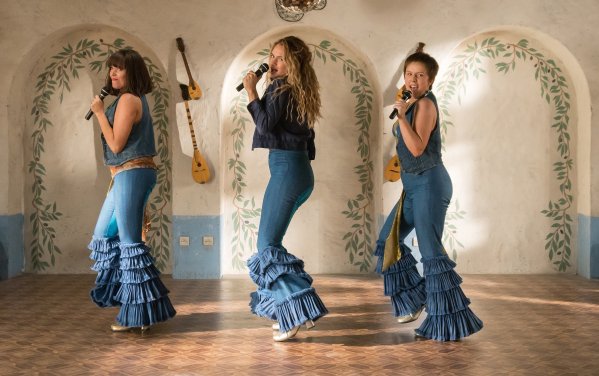 Mamma Mia: Here We Go Again Is Both Atrocious and Amazing
Next Up: Editor's Pick