President Donald Trump’s visit with Queen Elizabeth II may have been overshadowed by his summit with Russian President Vladimir Putin, but Jimmy Kimmel pulled it back into the light on Wednesday night’s Jimmy Kimmel Live!

During his recent trip to England, Trump managed to stir up the internet by committing a royal faux pas when he walked in front of the monarch. According to Kimmel, though, The Queen may have started it. He theorized that the Queen made her feelings about Trump evident through the brooch she wore on her suit—a piece of jewelry given to her by the Obamas.

While a brooch may not seem like much more than a sartorial choice to American audiences, according to Kimmel, though, “in England that’s the equivalent of releasing a diss track.”

“It’s like Drake and Pusha T all over again,” Kimmel said, referring to the feud between the rappers.

While the Queen—and the royal family in general—traditionally shy away from making political statements, according to Kimmel, this time she made an exception. To that end, Kimmel aired the fake “official statement” from Buckingham Palace that sums up the Queen’s feelings about President Trump and gives the president an official title that he may not appreciate. 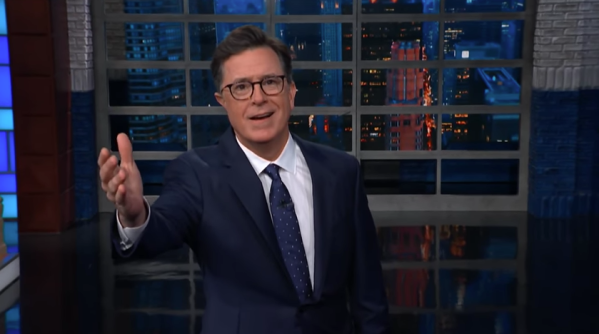 Stephen Colbert Had a Field Day With Trump's Double Negative
Next Up: Editor's Pick