Ivan Duque is Colombia's Youngest President-Elect Ever. Now He Has to Fix the Divided Country

Long before he got the chance to enter politics, Iván Duque was a local rock star. As a teenager in the 1990s, he sang in his high school band, Pig Nose. His onetime bandmates say that even then he was looking for something deeper than rock ‘n’ roll. “I was always looking for energy in my music,” recalls Rafael Gavassa, an old friend of Duque’s. “But Iván was a little more about substance.” The grunge music of Pearl Jam and Nirvana informed Duque’s songwriting. “I was more transcendental with the lyrics,” Duque remembers.

It’s hard to imagine Duque as a long-haired grunge lover now. Sitting in his campaign headquarters in Bogotá, the 41-year-old sports the sober dress shirt and tie of the political class–a look no doubt honed by his years in Washington working for a Latin American development bank. The wardrobe will also work in his next job. On June 17 he became the youngest person to be elected President of Colombia.

This country of 49 million is something of a regional outlier in terms of its politics; its democratic institutions have withstood the rise of Latin American strongmen and populists who ran military dictatorships in the late 20th century in Argentina, Brazil and Chile, and, more recently, the socialist experiments in Venezuela and Bolivia. Duque, a partly U.S.-educated technocrat who speaks fluent English, is more in the mold of a Macron than a Chávez or a Pinochet.

Like France’s upstart President, Duque says he wants to govern from the center. He joins a generation of younger leaders, like Canada’s Justin Trudeau and New Zealand’s Jacinda Ardern, who are committing themselves to a new kind of neoliberalism that attempts to move past left and right.

The President-elect promises to take Colombia forward by uniting its divisions. But the obstacles are huge. Corruption and rising unemployment top a list of concerns in a country that is only now emerging from a half-century of armed conflict. Coca production is reaching new highs, and powerful criminal mafias control territories in Colombia’s outer periphery. Next door, Nicolás Maduro’s iron grip on Venezuela’s failed experiment is pushing hungry and sick migrants across the border.

Duque’s first and greatest challenge when he takes power in August is to bridge the divide over Colombia’s peace deal with the Revolutionary Armed Forces of Colombia (FARC), which was at war with the state for five decades. Although a 2016 agreement earned outgoing President Juan Manuel Santos a Nobel Peace Prize, Colombians are bitterly divided over its terms. “Colombia has presented a paradox for the last two or three years,” explains Michael Reid, author of Forgotten Continent: A History of the New Latin America. “Santos’ government has been hailed globally for the peace accord. But at home his government has been unpopular for a long time … partly because of disillusion with the peace agreement.”

Duque, who won office on a promise to overhaul the deal, must solve that paradox if he is to succeed in his ambition to become a new archetype for what a Latin American leader can be. The agreement, he says, “left a fracture in Colombian society. And I think now it’s time to heal that wound.”

Born in 1976, Duque grew up when the drug baron Pablo Escobar’s Medellín cartel was at the height of its powers. Duque’s father governed Antioquia, the economically muscular province of which Medellín is the capital, during the early 1980s. Over the same period, cocaine began to rival extortion and kidnapping as FARC’s primary source of income. The Marxist group had formed in 1964 after farmers armed themselves and holed up in mountain camps during a government crackdown on left-wing ideology.

While the cartels and FARC were battling for control of Colombia, Duque was immersed in his studies. School friends remember him always walking around with a book in hand. “There we were with Batman, and at 14 he was reading The Prince!” Gavassa chuckles, referring to Machiavelli’s treatise on power. Duque studied law in Bogotá and, a year after graduating, left to work at the Washington-based Inter-American Development Bank, which finances development projects across Latin America.

He remembers the era as a period of violence back home, when many feared that Colombia could become a failed state. A week before he returned to get married in 2003, FARC blew up a business club in Bogotá, killing 36. A distant relative was among the dead. “It was shocking for everyone,” he says of the attack. “I think that was a big change in the way people felt about FARC and about violence.”

His work in Washington brought him into the orbit of Alvaro Uribe, the President of Colombia from 2002 to 2010, who became a mentor. After Uribe began the center-right Democratic Center Party in 2013, Duque returned home to run as a Senator. He quickly gained a reputation among his more hard-line colleagues in the Senate as a moderate consensus builder.

His signature issue became the peace deal struck by Santos in 2016, which ended fighting between the state and FARC. The agreement won international praise but proved hugely divisive in Colombia. Over 50 years, the sprawling armed conflict involving rebels, paramilitaries and the state left some 220,000 dead, millions displaced and large tracts of the country littered with land mines. Now FARC’s leaders were being allowed to walk free–and, to many Colombians, escape justice for their crimes. During a referendum on Santos’ proposed accord, Duque campaigned against it. “My whole life, I’m a person who believes in peace,” Duque says now, “but I believe that the only way to ensure peace in any society is with the rule of law.”

His opposition to the deal gave the freshman Senator a platform to become his party’s candidate for the presidency last December. During the elections that ushered him to power, it was a central plank of his campaign. Now Duque must tweak the agreement in a way that pleases everyone: the signatories, the Colombian people and the global community.

Duque speaks to supporters on the campaign trail in Cali, Colombia, on June 8.
LUIS ROBAYO—AFP/Getty Images

What he proposes is effectively an upgrade of the deal that would give stronger sentences to former FARC leaders and scrap amnesty for crimes by guerrillas linked to the drug trade. But Duque pledges to keep the provisions that he says are working, like the reincorporation of FARC into civilian life. The mistake Santos made, he says, was “dividing Colombians between friends and enemies of peace. For me, there are no enemies, and we all want peace.”

The divisions in Colombia aren’t all a product of the peace deal. The country has one of the most unequal societies in Latin America. Over half the population works off the books, while the public sees the government as a corrupt, elite institution dedicated to enriching itself. According to Gallup, in 2017 only 22% of Colombians had confidence in the government. To fix that, the President-elect says he will build a Colombia that works for everyone. “I want to be the President of social justice in Colombia. To increase and improve the quality of health coverage, education, housing and sports but at the same time guarantee the level of security and justice throughout the country so that no one feels threatened by criminals. That’s the way to ensure peace.”

Globally, Colombia is known for its most infamous historical export: cocaine. Although the days of Escobar are gone, the drug remains a multibillion-dollar industry. Acreage planted with coca, the hardy Andean shrub used for making cocaine, shot up to 180,000 hectares last year, compared with 48,000 hectares in 2012 at the start of the peace talks.

Those numbers have caught Washington’s eye, especially as Colombia has received $10 billion in U.S. aid since 2000 to fight drug trafficking. Last year, President Trump pushed to decertify Colombia as a partner in the war on drugs, a move that would threaten almost $400 million that has been pledged to post-conflict remediation. Advisers talked the U.S. President out of it, but the message to Duque on his recent visit to Washington was clear: the next Colombian President must deal with the cocaine problem in order for relations to prosper. “The reduction of illegal crops is vital for Colombia,” he says.

Duque also plans to work with the U.S. in rallying regional neighbors to take a harder stance against Venezuela, where Maduro is consolidating power. “I think our regional diplomacy during the last 20 years has been very weak toward Venezuela,” he says. He plans to withdraw Colombia from the Union of South American Nations, an organization created in part to challenge U.S. hegemony in the region, and denounce Maduro in front of the International Criminal Court. “We need to take actions when we see things that can be a threat to the entire continent,” he says.

Duque’s vision to set the region against authoritarianism may also help strengthen relations with Washington. “I think this is a government that will be very active in helping the U.S. convince other governments in the region that Venezuela is a rogue actor,” says Raul Gallegos, associate director at risk consultancy Control Risks.

The economic collapse of Venezuela has caused a regional humanitarian crisis, and at least 500,000 people have crossed the 1,300-mile border with Colombia in search of work. Duque suggests starting a “humanitarian fund” to deal with migrants on the border and creating a unified set of policies that would give migrants the same employment rights as Colombian workers. But ultimately the crisis won’t be solved until Maduro is out of government, Duque says. “Now is the time for the whole continent to put enough diplomatic pressure to open the road for Maduro to step out.”

It’s not yet clear whether Duque will govern with a populist streak, but he does know how to display a popular touch. During his campaign, he danced salsa with TV hosts and sang folk music, in contrast with the aristocratic Santos. “I think he models himself a little on JFK,” says Mary Roldan, a Latin American historian at Hunter College. “The young man who comes without any political baggage, who represents youth and a pragmatic, modern, untainted approach to politics.”

But Duque does indeed have baggage: a perceived synonymy with his hard-line mentor that he hasn’t been able to shake. Uribe is a controversial figure in Colombia. While the former President demobilized brutal paramilitary groups, close associates were found guilty of cooperating with them, members of his government spied on judges and journalists, and his military murdered civilians. He is seen by some as symbolic of the corrupt elite that Duque says he is against–and many see the younger man as a puppet of his predecessor. “The big question about Duque is to what extent is he his own man?” Reid says. Duque insists that he has his own political agenda, separate from his mentor. “We disagree on a lot of things,” he says.

When they first met in Washington, Uribe was a presidential candidate, and Duque says they bonded by reciting the Gettysburg Address together and exchanging book recommendations on the 16th President of the U.S. “What I admire about Lincoln is his humility, creativity, love for his people and capacity to build consensus in times of crisis,” Duque says. “[He] had this capacity to govern the country with all the people in the past who were his adversaries.”

But it was also Abraham Lincoln’s 1860 election that helped trigger the American Civil War. That President found greatness by holding together a young nation that had descended into a cataclysm. Duque’s challenge is to manage the peace in his own. 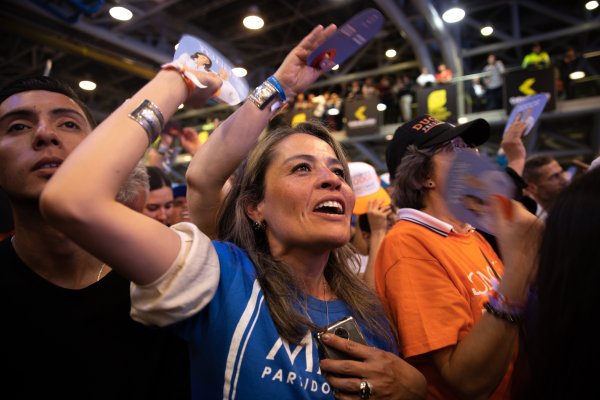 The Most Surprising Aspect of Colombia's Elections Wasn't Who Won
Next Up: Editor's Pick