Mamma Mia: Here We Go Again Is Both Atrocious and Amazing

Mamma Mia! Here We Go Again is terrible. And irresistible. How a movie that’s almost not even a movie can be both of those things at once is one of the mysteries of filmgoing, and one of its puckish pleasures. The thing barely holds together, though that shouldn’t be a surprise: like its predecessor, the hugely successful 2008 Mamma Mia!–itself based on a Broadway megahit–Here We Go Again is tailored around the music of ’70s Europop superstars ABBA. It doesn’t really need a plot; its chief job is to prove that ABBA’s songs are unkillable, and sure enough, they live.

Amanda Seyfried, with her winsome, Keane-painting eyes, returns as Sophie, who is just about to open a refurbished inn on a Greek island. The place used to belong to her mother Donna (played in the earlier movie by Meryl Streep, who appears briefly in this one too). Donna died a year ago, and Sophie is still in mourning. But her two de facto aunties (Christine Baranski and Julie Walters), Donna’s best friends, bolster her by recounting in flashback the joys and challenges her mother faced as an adventurous young woman. Young Donna (a game, bright-eyed Lily James) graduated from Oxford in 1979 and took off for Greece by way of Paris, sleeping with three swains (Hugh Skinner, Josh Dylan and Jeremy Irvine) along the way. These young men will grow up to be Sophie’s possible dads, all marvelous: Sam (Pierce Brosnan), grounded and sensible but cool enough to carry off bead bracelets and rope-soled shoes; scatterbrained but delightful banker Harry (Colin Firth); and seafaring adventurer Bill (Stellan Skarsgard), possessed of an appealing, morose goofiness.

Here We Go Again, directed by Ol Parker (writer of the Best Exotic Marigold Hotel movies), works overtime to send its audience home happy, and in places the strain shows. But when the picture goes off the rails, it does so with gusto. Late in the movie, Cher–the only soupçon of tinsel you could add to this already extreme glitter-platform fest–appears as Sophie’s diva-times-10 grandmother Ruby. The finale of Here We Go Again is a go-for-broke version of “Super Trouper” in which every cast member gets to don a shiny silver space outfit and go wild. The young actors shimmy up to their older counterparts, the past meeting the present in one glam hootenanny. Everyone has a sense of humor about everything. Cher emerges, singing in that dusky, magic-hour voice and wearing a pair of bell-bottoms so extreme, she looks like a psychedelic upside-down lily. 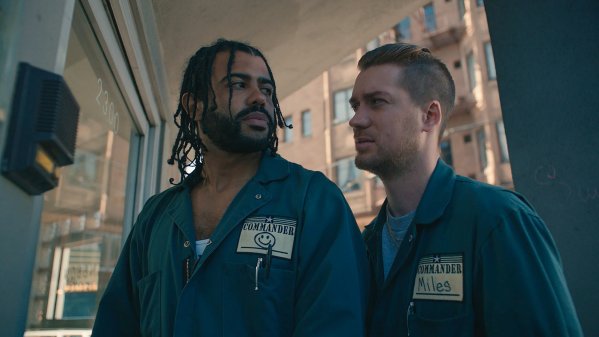 Blindspotting Takes a Hard Look at Race and Gentrification
Next Up: Editor's Pick