How the First Amendment Became a Tool for Deregulation

Picking a Supreme Court nominee can be less a science than a kind of holy divination. It’s an exercise not only in prophesizing a judge’s future decisions based on past actions, but also predicting which questions he or she might one day be asked. But one thing about Donald Trump’s nominee, Brett Kavanaugh, is certain. If he is confirmed to fill Justice Anthony Kennedy’s seat, Kavanaugh will not only become a decisive vote on cases shaping the future of administrative agencies, religious liberties, gun and abortion rights, and environmental protections, he will also be joining a court whose conservative majority has redefined the First Amendment, making it a powerful deregulatory tool–a process Kavanaugh is poised to accelerate.

In its last term alone, the Supreme Court decided four landmark cases on First Amendment grounds. In one, conservative Justices overturned a California state law that would have required anti-abortion “crisis pregnancy centers” to disclose information about abortions. The Justices said that because the law compelled the organizations to “speak” against their will by posting a government notice, it violated the First Amendment. In another case, Janus v. AFSCME, the court overturned a 41-year-old precedent requiring public-sector employees to pay nonpolitical union fees. The Justices said that because the provision compelled employees to “speak” by paying dues, it too violated the First Amendment.

The court’s sweeping definition of what constitutes free speech has alarmed some of its members. In her dissent in Janus, Justice Elena Kagan accused her colleagues of “weaponizing the First Amendment.” She warned that because “almost all economic and regulatory policy affects or touches speech,” judges can use expansive definitions of speech as a tool to unravel regulations and overturn precedents.

It’s a project that court watchers say has been decades in the making. In the 1970s, liberal lawyers, acting on behalf of consumers, were the first to bring cases designed to expand the scope of the First Amendment. But conservative lawyers quickly saw an opportunity. By the end of that decade, conservative judicial organizations were launching an onslaught of First Amendment cases of their own, with the goal of “deregulating and limiting government power,” says Frederick Schauer, a professor at the University of Virginia School of Law. Ilya Shapiro, a senior fellow at the libertarian Cato Institute, says he now advises lawyers to find free-speech arguments whenever they can. If a judge overturns a regulation or precedent on the grounds of government overreach, he explains, “that’s seen as controversial and partisan.” If a judge reaches the same conclusion on the grounds of protecting free speech, “it’s easier for people to accept.”

The past decade has borne fruit for this conservative judicial strategy, with the 2010 Citizens United case acting as a bellwether. In that case, the court ruled not only that corporations were speakers protected under the First Amendment, but also that corporate campaign contributions constituted protected speech–and therefore could not be limited. The decision triggered an avalanche of subsequent cases built upon similar logic. In 2011, the court struck down a Vermont law barring the sale of subscriber information to pharmaceutical companies. The Justices ruled that “speech in aid of pharmaceutical marketing … is a form of speech” protected by the First Amendment. A year later, the D.C. Circuit Court of Appeals struck down a rule requiring companies to post federal labor protections on the grounds that it “compelled” companies to “speak” against their will. The same court later overturned an FDA rule requiring graphic warning labels on cigarettes, saying they too violated free speech by compelling tobacco companies to “speak.”

As a D.C. Circuit judge, Kavanaugh has a record on First Amendment cases that is slim but suggestive. Last year he objected to his fellow judges’ refusal to rehear a challenge to the FCC’s net-neutrality rule. The rule, which was repealed this year, would have required Internet-service providers to treat data from all websites equally. Kavanaugh wrote that the court’s view violated the Internet-service providers’ First Amendment rights by restricting their “editorial discretion.” Kavanaugh’s decision in a 2010 case on federal limits on contributions to political parties also showed sympathy for free-speech arguments. While he upheld the limits in that case, citing a 2003 Supreme Court precedent, he left the door open to a future First Amendment challenge. As a Supreme Court Justice, Kavanaugh would have considerably more latitude to join fellow conservatives in redefining First Amendment protections.

Critics see the recent explosion of broad free-speech rulings as evidence of increasing judicial activism–a term that describes court rulings that advance an ideological agenda. Historically, that’s a charge leveled by the right against progressive judges. But Burt Neuborne, the founding legal director of the Brennan Center for Justice at NYU School of Law, says the conservative Justices are now “deliberately using the First Amendment as a deregulatory device.” Kavanaugh’s confirmation to the court, he says, would cement that trend “for the foreseeable future.” 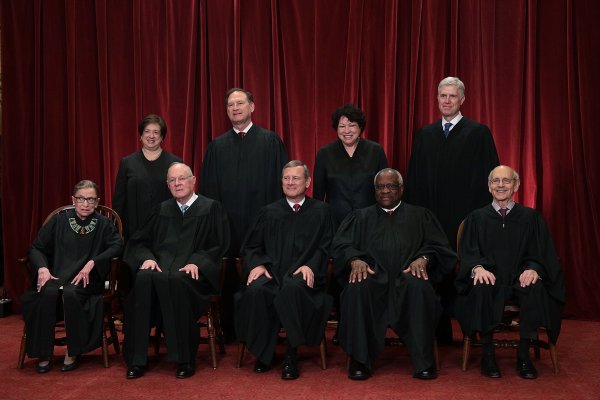 The Supreme Court Doesn't Need 9 Justices. It Needs 27
Next Up: Editor's Pick