President Donald Trump looks on during a cabinet meeting in the Cabinet Room of the White House on July 18, 2018 in Washington, D.C.
Olivier Douliery—Pool/Getty Images
By Katie Reilly

President Trump on Wednesday said he holds Russian President Vladimir Putin responsible for meddling in the 2016 presidential election, adopting a tougher stance in his latest remarks on the topic after encountering bipartisan backlash for declining to criticize Putin during Monday’s joint press conference in Helsinki.

In an interview with Jeff Glor on CBS Evening News, Trump said he agreed with U.S. intelligence officials that Russia meddled in the 2016 presidential election.

“I have said that numerous times before, and I would say that that is true, yeah,” Trump said.

The answer differed from the one he gave during the press conference with Putin on Monday, when he said Putin was “extremely strong and powerful in his denial” and said “I don’t see any reason why it would be” Russia. (He later clarified on Tuesday that he intended to say “wouldn’t.”)

In the CBS News interview on Wednesday afternoon, Trump said he believes Director of National Intelligence Dan Coats, who has warned that Russia poses an ongoing threat to cyber security.

“Well, I accept. I mean, he’s an expert,” Trump told CBS about Coats’ warning. “This is what he does. He’s been doing a very good job. I have tremendous faith in Dan Coats, and if he says that, I would accept that. I will tell you though, it better not be. It better not be.”

When asked if he holds Putin personally responsible for the election interference, Trump said he does, but declined to say whether Putin had lied. “I would, because he’s in charge of the country, just like I consider myself to be responsible for things that happen in this country,” Trump said. “So certainly, as the leader of a country, you would have to hold him responsible, yes.”

Trump also said he addressed the meddling with Putin in their one-on-one meeting, saying he was “very strong on the fact that we can’t have meddling.”

“I let him know we can’t have this, we’re not going to have it, and that’s the way it’s going to be,” Trump said.

But even while walking back many of the answers he gave Monday, Trump still defended his performance at the Helsinki press conference.

“I think I did great at the news conference,” he said, later adding: “I don’t know what the fuss is all about. I think we did extremely well.” 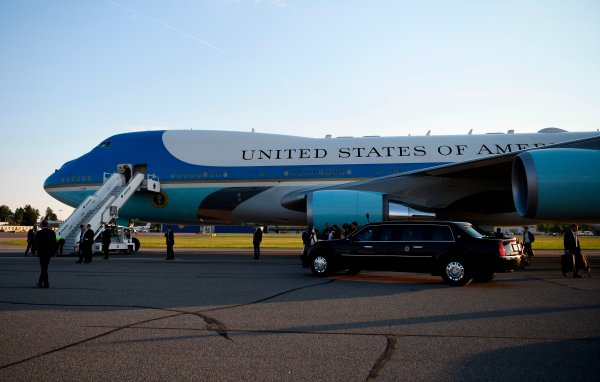 Trump Wants to Redesign Air Force One. Here's Why the Presidential Plane Looks the Way It Does
Next Up: Editor's Pick