We just witnessed one of the most astonishing seven days of U.S. foreign policy. It wasn’t pretty, but it was eye-opening. Here, the key consequences of a week to remember.

1. A Missed Opportunity at NATO

President Donald Trump has unorthodox views when it comes to U.S. foreign policy. Lots of them. And while it’s true that every other president in the post-war era has been steadfast in voicing support for NATO, Trump’s outright questioning of the military alliance is not only understandable, it’s necessary. What exactly does a NATO alliance do in 2018? Who pays its dues? What triggers a coordinated NATO response? Does a cyberattack rise to the level of collective action? For the first time ever, politicians and pundits were debating these questions seriously and honestly. And Trump was the reason why.

But then the U.S. president got in his own way. He criticized other NATO members for not contributing their fair share—just five NATO members, including the U.S., currently meet the commitment to spending 2% of GDP on defense. But Trump then announced victory, saying he had succeeded in getting NATO members to agree to spend more (he apparently floated a 4 percent figure in a closed-door meeting) and on a quicker timeframe, only to be rebuked by other NATO leaders, most notably French President Emmanuel Macron. And just like that, substantial and pressing NATO questions transformed into spectacle yet again. Given his unusual worldview, Trump’s NATO argument was one of his strongest. He just frittered it away.

On the heels of the NATO summit, Trump headed directly to the United Kingdom. Even before Trump touched down, it was shaping up to be the most turbulent week of British politics since the Brexit vote—Brexit Secretary David Davis and Foreign Secretary Boris Johnson had both resigned in protest of U.K. Prime Minister Theresa May’s proposed “soft Brexit” approach to negotiations with Brussels. Trump then arrived and promptly poured fuel on the political fire, giving an interview to British tabloid The Sun in which he criticized May’s strategy, saying that her pursuit of a less-radical break with Europe would cost her a bespoke U.S.-U.K. trade deal. As an aside, he mentioned that he thinks Johnson would “make a great prime minister”. Ouch.

Trump seemed to be genuinely surprised that his remarks caused such an uproar and denied criticizing May. As Trump saw it, the press misrepresented his statements. To most Brits, he probably shouldn’t have been making such inflammatory comments in the first place.

If Trump does want to reshape the world order, he needs to take advantage of geopolitical opportunities as they arise. The U.K.’s need for new trade deals post-Brexit is exactly such an opportunity. Trump seems to have complicated it for no good reason.

3. The Summit to End All Summits

Leave aside whether Trump should have scheduled the summit with Vladimir Putin in the first place. He’s wanted one for ages, and he finally succeeded. But that press conference: wow. The Donald Trump that delivered those statements was not a man committed to perpetuating the “witch hunt” narrative about Special Counsel Robert Mueller investigation. Indeed, one has to wonder if he temporarily forgot that there’s an active Russia-collusion investigation unfolding back home. Of all the statements Trump uttered during that press conference, by far the most damaging was his response to whether he believed U.S. intelligence agencies’ assessment of Russia’s interference in the 2016 election. “They think it’s Russia. I have President Putin—he just said it’s not Russia. I don’t see any reason why it would be.”

The backlash was so swift and so bipartisan that Trump was forced to do a follow-up statement the next day in Washington clarifying that he actually meant to say “wouldn’t” where he said “would.” He then followed up by saying that “I accept our intelligence community’s conclusion that Russia’s meddling in the 2016 election took place,” before immediately adding “It could be other people also. A lot of people out there.” That seemed enough to placate his supporters and enrage his critics, which is perhaps Trump’s sole political principle these days.

4. No deep state…but a deep bureaucracy

If there was a clear winner from the now-infamous Helsinki press conference, it was the Mueller investigation. The calls among rank-and-file congressional Republicans to end the investigation were growing, but that Helsinki performance bought Mueller’s team some more time… at least until U.S. politics snap back to their new normal.

But Mueller was far from passive these last 10 days. There was a flurry of investigation-related activity both before and after the Trump-Putin summit; on the Friday before Helsinki, the Department of Justice announced the indictments of 12 Russian military intelligence officials, the first time Mueller has targeted the Russian government and named Russian officers in his investigation. The day after Helsinki, the Department of Justice also charged Maria Butina as a potential Russian spy who attempted to infiltrate the National Rifle Association in order to sway U.S. politics. These were clear messages being sent to Trump—ones he promptly ignored.

Any effective government needs a well-functioning civil service committed to their jobs; Trump’s recent European adventure has disheartened many of those folks, particularly ones working in intelligence and the State Department. Indeed, the only administration folks who seem motivated at present to do their jobs are the ones investigating Trump.

It was an extraordinary week, even by Trumpian standards. Allies were insulted, enemies were feted….and the winner of it all was China, which largely stood aside and let things unfold (though it did find time to make trade overtures to Europe this week). Some will argue that Putin was the big winner of all this—what with the Transatlantic alliance showing its divisions and Trump’s Helsinki performance. But for all the chaos, Trump has effectively strengthened the resolve of traditional Russia skeptics (U.S. Congressional Members, European countries) to push back against Moscow. For them, opposing Russia has now become an existential question, and will likely make Putin’s life harder, not easier. 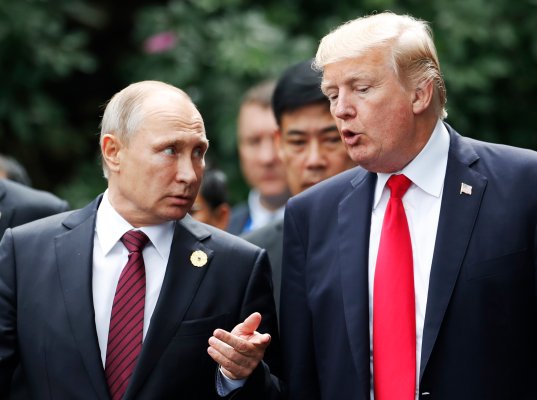 Trump and Putin Will Call Their Summit a Success. But Don't Expect U.S.-Russia Relations to Improve
Next Up: Editor's Pick