Barack Obama is no longer president — but he’s still on a diplomatic tour of sorts this week. Earlier he gave a speech to celebrate Nelson Mandela’s 100th birthday in Johannesburg, and previously he was spotted in Kenya getting festive with some of his extended family, including his step-grandmother Sarah and half-sister Auma Obama.

The former president, who last visited his father’s native country of Kenya while in office back in 2015, was there to support Auma: she founded a resource center, Sauti Kuu, and the group were marking the opening of the space in western Kenya. So to celebrate the milestone, of course there was plenty of music and dancing. And both Barack Obama and his 96-year-old step-grandmother joined in, to the crowd’s delight. First Obama got to his feet — and then he graciously helped Sarah stand up to try out some of her own moves. As we know, Obama is no stranger to breaking out in a jig and appreciating music, often releasing hip playlists and getting snapped enjoying the performances of famous White House guests. He also has a history of getting down while in Kenya: back during his state visit in 2015, he put on a show with the Lipala, a traditional Kenyan dance.

(Former First Lady Michelle Obama, meanwhile, has been on her own globetrotting travels. She was last spotted hanging out with Beyoncé’s mom Tina Knowles Lawson front row at Beyoncé and Jay Z’s big show in Paris. And they were dancing, too. It’s just an Obama thing.) 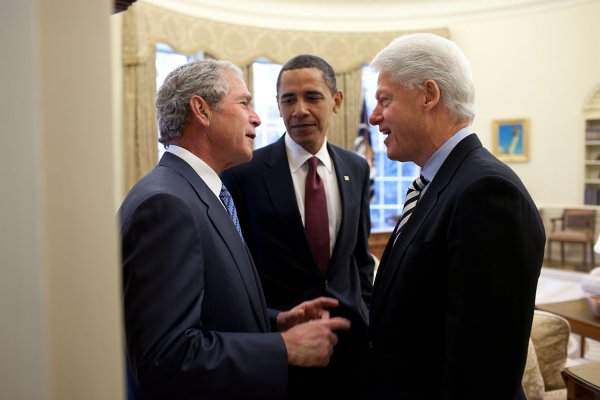 Americans Say Obama Was Best President of Their Lifetimes
Next Up: Editor's Pick