In the weeks and months before hundreds of thousands of Rohingya civilians fled from Myanmar to Bangladesh, authorities had made “extensive and systematic preparations” for attacks on the Muslim minority, according to a human rights group.

A landmark report released Thursday by Bangkok-based Fortify Rights says there are “reasonable grounds” to believe that genocide and crimes against humanity were committed against the minority, implicating 22 Myanmar army and police officials in the chain of command. The group has called on the U.N. Security Council to refer the situation to the International Criminal Court (ICC) for criminal investigation.

A burnt Rohingya village near the town of Maungdaw, Rakhine State in western Myanmar, on Nov. 12, 2017.
Hein Htet—EPA-EFE/Shutterstock

The Rohingya are a persecuted and mostly stateless Muslim minority from Rakhine state in western Myanmar, a predominantly Buddhist country. After an insurgent group known as the Arakan Rohingya Salvation Army (ARSA) attacked state security forces on Aug. 25, 2017, the Myanmar military carried out brutal reprisals against Rohingya civilians characterized by murder, rape and arson. The crackdown forced more than 700,000 Rohingya to flee across the border into neighboring Bangladesh.

Fortify says that the campaign to expel them was not merely a response to the insurgent attack, as the dominant narrative holds, but that it was premeditated. The August ARSA attack was the second of its kind; the group’s first fatal ambush was carried out in October 2016, which the Myanmar military met with a brutal campaign of rape and extrajudicial killing that forced tens of thousands to flee.

Fortify suggests that the international community’s failure to effectively respond to the October violence may have emboldened security forces, who appear to have been poised and waiting for a second attack to trigger the group’s violent expulsion.

Systematic preparations detailed in the report include the collection sharp or blunt objects from Rohingya civilians, training and arming local non-Rohingya cummunities, tearing down fencing and other structures around Rohingya homes, deliberately depriving Rohingya of food and life-saving aid to weaken them prior to attacks, and deploying unnecessarily high numbers of state security forces to northern Rakhine state.

The group says these actions resemble “preparatory actions” for genocide and crimes against humanity as outlined by the U.N.’s Framework for Analysis of Atrocity Crimes.

The report says attacks in northern Rakhine beginning in August 2017 were committed by at least 27 Myanmar Army battalions, comprising up to 11,000 soldiers and at least three combat police battalions. It also identifies 22 military and police officials as responsible and suggests they should face criminal investigation and possibly prosecution. 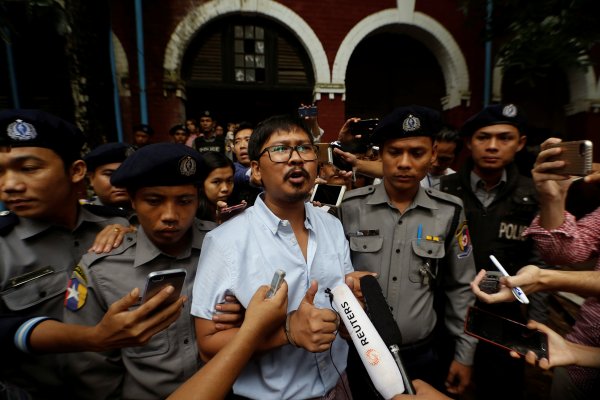 Myanmar Court: 2 Journalists Will Face Trial
Next Up: Editor's Pick