US President Donald Trump (C) and US First Lady Melania Trump are greeted by an honour guard of Royal Air Force personnel after disembarking Air Force One at Stansted Airport, north of London on July 12, 2018, as he begins his first visit to the UK as US president.
BRENDAN SMIALOWSKI—AFP/Getty Images
By Justin Bachman and Alyza Sebenius / Bloomberg

(BLOOMBERG) — Forget John F. Kennedy’s baby blue: The next version of Air Force One will be painted in the colors of the American flag, according to President Donald Trump.

“It’s going to be the top of the line, the top in the world,’’ Trump said in an interview with CBS. “And it’s going be red, white and blue, which I think is appropriate.’’

The new paint job for a global symbol of U.S. power would replace the blue, light blue and white color scheme that dates to the Kennedy era. Trump put the spotlight on Air Force One shortly before taking office when he criticized Boeing Co. for the expense of the converted 747 jumbo jets. He later reached an agreement with the planemaker and took credit for lowering the cost.

“Boeing gave us a good deal. And we were able to take that,” Trump said in comments that aired Tuesday, confirming an Axios report last week on the presidential plane’s new look. “But I said, ‘I wonder if we should use the same baby blue colors?’ And we’re not.”

There is precedent for Trump’s interest in weighing in on the Air Force One’s design. President John F. Kennedy and first lady Jacqueline Kennedy worked with New York designer Raymond Loewy on the presidential aircraft’s look in the 1960s, according to the New England Historical Society.

The first lady worked with Loewy — an iconic industrial designer known for his work on the logo for Shell Oil and vending machines used by Coca-Cola Co. — on the interior of the plane, down to the glassware from Tiffany’s, according to the society. The lettering on the outside the aircraft was inspired by the heading of the U.S. Declaration of Independence.

Boeing agreed in February to a $3.9 billion contract with the Air Force to modify two 747-8 aircraft to update the presidential transport. The jets had been built for a Russian airline that went bankrupt in 2015.

The military version of the 747, which the Air Force designates the VC-25, is dubbed Air Force One whenever the commander-in-chief is aboard. It is heavily modified to support the president and staff for extended periods aloft — equipped with an advanced communications system, self-defense capabilities and other features that add to the cost.

The humpbacked 747, with a list price of a little more than $400 million, has fallen out of favor as a passenger jetliner. New models typically are used as freighters. 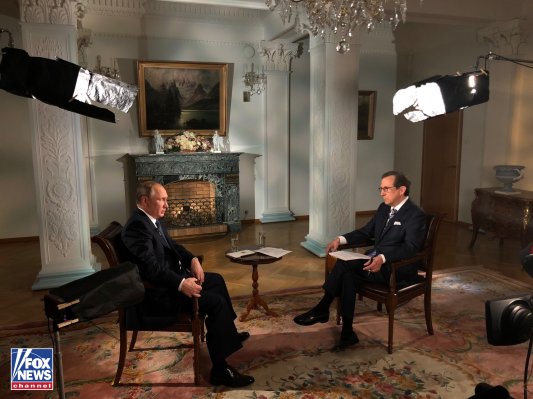 Vladimir Putin Again Insists He Has No Compromising Information on President Trump
Next Up: Editor's Pick