The Romanov Family Died a Century Ago. It’s Time to Lay the Myths About Them to Rest, Too

On Tuesday in Yekaterinburg, Russia, a large industrial city in the foothills of the Ural Mountains, a gathering of hundreds of thousands of pilgrims from all over the world at the city’s Church on the Blood marks the 100th anniversary of the murder of Russia’s last Imperial Family, the Romanovs.

Today most of us are aware of the tragic circumstances of this killing, the brutal and merciless way in which Nicholas and Alexandra, and their five innocent children, Olga, Tatiana, Maria, Anastasia and Alexey, were murdered by the Bolsheviks. For a century the Romanov story has exercised a seductive power that has never ceased to fascinate. Now, with 100 years passed, the centenary offers an opportunity for that fascination to be refocused on the facts of what really happened to the last Tsar and his family.

It began with the emergence of Anna Anderson in Berlin in 1920. As the first claimant to be Anastasia, she said she had miraculously escaped the bloodbath at the Ipatiev House. Her longstanding campaign for recognition, which sparked a whole written and filmed mythology, was fought in the European courts for decades, ensuring that the Romanov story regularly resurfaced in the press, though for all the wrong reasons. People became so fascinated by a woman who was later proved conclusively to be a fraud that they lost sight of the real Romanovs. The fondness for conspiracy theories that this fed into and an insistence by claimants persisted (there have been several false Anastasias as well as Alexeys in particular), even after the remains of most of the family and their four servants were excavated from a shallow grave in 1991. The bodies had in fact been found in secret in 1979 but it was not until after the fall of the Soviet Union that the political climate allowed their burial place to be revealed.

But two of the children were missing from that grave — Alexey and Maria. Although the rest of the family were given a grand official re-interment by Russia’s then-president Boris Yeltsin, in the Peter & Paul Cathedral in St. Petersburg in 1998, the missing remains were not finally located until 2007. They were found by a combined team of local and U.S. archaeologists only 60 meters or so from the original grave.

Extensive DNA and other scientific testing was conducted on the Romanov remains by teams of forensic scientists in Russia, the U.K. and the USA. But these tests and studies were complicated by the fact that in 1981, the Russian Orthodox Church Abroad had already declared the Romanovs to be Saints and ‘New Martyrs.’ The Patriarchate in Moscow initially resisted recognition of the Romanovs as Saints, but finally followed suit in 2000, naming them Saints and ‘passion bearers.’ To the layman there may seem little difference in the terms, but to the Church ‘passion bearers’ explicitly denotes those who faced their death in a ‘Christ-like’ manner of acceptance and faith.

Because the Romanovs are deemed to be Holy Martyrs, their remains are likewise holy relics; in Orthodox practice those deemed Holy Martyrs cannot be buried in a funeral service in the same manner as we ordinary mortals. The conventional burial of the Romanovs was thus deemed to be an apostasy, prompting the church to take a position of ‘benign non-recognition’ of the remains.

That policy has led the confusion that surrounds the Romanovs to continue far longer than necessary.

Having presented a list of its own questions about the previous DNA testing, in 2015 the Russian Orthodox Church (ROC) insisted that the Romanov bodies be exhumed so that additional samples might be taken for further tests to be conducted by its own, exclusively Russian scientists. Hopes were raised for an end to this ongoing controversy, but so far no announcement of the church’s findings has been forthcoming.

However, like it or not, the FBI has come up, separately from the ROC, with its own conclusive tests, based on entirely different DNA samples that have recently come to light.

This has been thanks to the dedicated work over many years of former U.S. Navy captain Peter Sarandinaki. As president of the SEARCH Foundation, which oversaw the discovery of the remains of Maria and Alexey in 2007, and which is still searching for those of Tsar Nicholas’s brother Michael, murdered near Perm in 1918, Sarandinaki was approached with a new lead by the respected Russian art scholar and antiques expert Nicholas Nicholson. As Senior Vice President of the Philadelphia auction house Freeman’s and himself a Fabergé expert, Nicholson had met a private collector who owned two crucial royal objects made by the famous Russian master craftsman.

These were a Fabergé locket containing a photograph of Tsaritsa Alexandra and with a lock of her hair, and a Fabergé photograph frame with a picture of Queen Louise of Denmark that also contained a cutting of her hair. Louise was Nicholas II’s grandmother, another direct link to the Romanovs for any testing of mitochondrial DNA.

Captain Sarandinaki sent these samples to the FBI to see if any DNA could be extracted from the hair in these two Fabergé pieces. It seemed a very long shot but the FBI ran DNA tests. The hair samples proved, miraculously, to be sufficiently non-degraded to be viable, having been sealed inside the two objects for over a century.

The DNA extracted from the hair in the locket turned out to be the perfect match for the female line Mitochondrial DNA for Tsaritsa Alexandra, and also checked correctly against the DNA on file from Prince Philip, another distant relation who had donated samples for the first DNA tests in the 1990s. The DNA extracted from the photograph frame material also proved to be the correct female line mitochondrial DNA for Tsar Nicholas.

In short, as confirmed by a Justice Department report released in June, all of the DNA from the two samples perfectly matches the already long-published DNA sequence of the remains found in the Koptyaki forest. This information has been submitted to the Patriarch, and the Commission on the Imperial Remains. Meanwhile the two crucial Fabergé pieces and other material relating to their scientific testing can be seen at a new exhibition “Last Days of the Last Tsar” that has just opened at the Holy Trinity Monastery at Jordanville in upstate New York. It is the first major exhibition to focus specifically on the final days of the Russian Imperial Family.

The Russian people and others fascinated by this history long for an end to the doubt, to the bogus claims of fraudsters and the proliferation of conspiracy theories. Closure did not come in time for the 100th anniversary, and the Russian Orthodox Church may choose, still, not to sanction the remains found in the Koptyaki Forest outside Ekaterinburg as indeed being those of the Romanov family. But, with or without its official blessing the science is now incontrovertible. The Romanovs all died at Ekaterinburg on July 17, 1918. May they all now rest in peace. And may the world see an end, at last, to the fantasies of the false claimants.

Helen Rappaport is the author of The Race to Save the Romanovs: The Truth Behind the Secret Plans to Rescue the Russian Imperial Family, published in the USA by St. Martin’s Press and in the U.K. by Hutchinson. 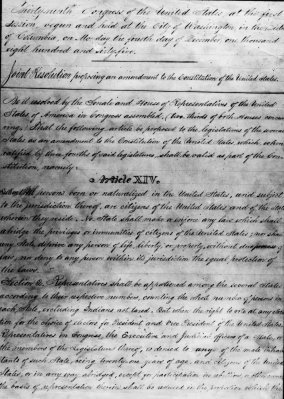 How the 14th Amendment's Promise of Birthright Citizenship Redefined America
Next Up: Editor's Pick