Las Vegas shooting survivors who are being sued by the owner of the hotel where the gunman opened fire last year say the lawsuit is a “bullying tactic” that is hitting them at their most vulnerable.

“Not in a million years did I think this would happen,” Lisa Fine, 49, a survivor of the shooting who suffered knee injuries, tells TIME. “I cannot believe that they considered doing this at all. We’re outraged.”

The lawsuit was filed on July 13 by MGM Resorts International, which owns the Mandalay Bay Hotel, from where Stephen Paddock opened fire Oct. 1, 2017 – killing 58 people and injuring more than 500 others who were attending a concert at the Route 91 Harvest Festival. MGM says it has “no liability of any kind” to survivors and victims’ families because of the SAFETY Act, a post-Sept. 11 federal law that offers legal protection to corporations following terrorist attacks.

Several lawsuits were brought against MGM after the shooting, arguing the hotel and concert officials did not do enough to prevent the shooting. In November 2017, more than 450 victims filed a lawsuit against MGM Resorts in Los Angeles County Superior Court claiming the hotel “breached their duty of reasonable care.”

Many survivors, Fine says, are dealing with medical and emotional trauma that has taken a financial toll on their lives, leading some to lose their jobs and face eviction. That makes it particularly challenging for them to deal with MGM’s legal action, she says.

“What makes this suit so awful is that the people that were hurt the most don’t have the means to fight back,” Fine says. She, along with fellow survivor and attorney Brian Claypool, co-founded Route91Strong, a non-profit that offers financial assistance and emotional support to survivors. “There are people who survived this that are on suicide watch,” Fine adds. “With this lawsuit they are killing people, making sure they give up hope. It’s just a complete surprise.”

In a statement MGM Resorts spokeswoman Debra DeShong says the company is seeking no financial damages from the victims – and is merely trying to defend itself from lawsuits brought in state courts.

MGM argues it can avoid liability for the shooting because the company hired Contemporary Services Corporation, which has SAFETY Act anti-terrorism certifications, to work security at the Route 91 Harvest Festival.

“From the day of this tragedy, we have focused on the recovery of those impacted by the despicable act of one evil individual,” according to statement from MGM Resorts. “While we expected the litigation that followed, we also feel strongly that victims and the community should be able to recover and find resolution in a timely manner. Congress provided that the Federal Courts were the correct place for such litigation relating to incidents of mass violence like this one where security services approved by the Department of Homeland Security were provided. The Federal Court is an appropriate venue for these cases and provides those affected with the opportunity for a timely resolution. Years of drawn out litigation and hearings are not in the best interest of victims, the community and those still healing.”

Finch also says that MGM Resorts also faces lawsuits for activity inside the Mandalay Bay Hotel – where Contemporary Services Corporation was not working security. Other suits claimed Live Nation did not have proper evacuation plans at the festival. Those actions would not fall under SAFETY Act protections, he says.

Claypool, who attends therapy sessions once a week as a result of the shooting, says the lawsuit destroyed any pretense that MGM Resorts was trying to look after the victims of the shooting.

“As a survivor, this is garbage,” he says. “It’s so hypocritical. Since the shooting, they’ve been on this PR blitz about how much they care about survivors, but now they’re going to sue us. You couldn’t go any lower in the gutter than to go after victims.” 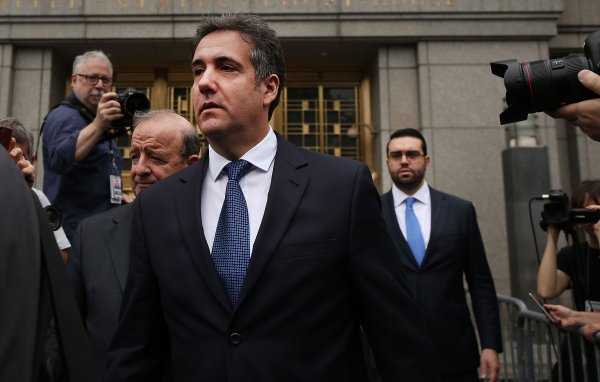 Michael Cohen Prosecutors Get 12 Recordings
Next Up: Editor's Pick