Landscaping Businesses Are Losing Money Because of U.S. Visa Policy

This year has been tough on Shayne Newman, the owner of the Connecticut-based landscaping company YardApes.

For the past two decades, Newman’s business has come to rely on help that comes via the H-2B visa program, which allows employers to hire foreign workers for seasonal, nonagricultural employment.

But this year, Newman was not able to secure the 15 H-2B visas he requested, leaving him short on workers and overly reliant on his full-time employees to pick up the slack. As a result, he says, his staff is working longer hours, the company’s sales volume has dropped and customer complaints have gone up. So far this season, YardApes lost a contract that accounted for about 10% of the business’ overall revenue.

“This has been the most challenging year that I’ve dealt with business-wise,” says Newman. “We’ve got all hands-on-deck and we’re doing what we can to get the fieldwork done, but it’s definitely been a challenge.”

Companies that rely on seasonal workers have found themselves in similarly tough spots this year because, for one, the economy is strong. Landscaping companies have been hit the hardest — they employ more H-2B visa holders than any other industry.

The federal government allots 66,000 H-2B visa slots every year that are given out semi-annually. In order to qualify for H-2B visas, employers must first attempt to hire American workers. But landscaping professionals say that because there are fewer out-of-work Americans willing and able to accept seasonal work in their industry, demand for foreign workers has increased.

“We terminated about $450,000 in annual contracts back in March to adjust,” he says, but notes that those losses plus the $2.1 million in contracts that were terminated earlier add up to a substantial loss. “We’ve worked 37 years to be a good steward of our community and then things that really feel out of your control happen and it feels like you’re taking a big step back.”

Demand has been particularly high this year. When the process started for the second-half of FY 2018 in January, the Department of Labor received applications for 81,600 workers — almost two and a half times the number of slots available. As a result, federal officials conducted a lottery through which they randomly selected petitions in order to meet the 33,000-worker cap.

Congress sought to address the discrepancy in the 2018 omnibus spending bill, which included a provision that allowed the Homeland Security Secretary to release additional visas. In late May, Secretary Kirstjen Nielsen announced that they would release an additional 15,000 visas. A similar step was taken last year, when demand was also high.

Laurie Flanagan of the National Association of Landscape Professionals says the extra 15,000 does not come close to meeting the demand that currently exists. Flanagan says Congress should step in to provide more permanent relief, a sentiment Secretary Nielsen also expressed when she announced the release of additional visas.

“We need permanent H-2B cap relief so that employers can actually plan,” says Flanagan. “When I went to business school, businesses talked about doing five-year plans. Here, you can’t even plan your current year because you don’t even know if you can get your workers because of this cap.”

There are several ways in which Congress could address the issue. In the past, it has taken steps to exclude returning workers from the cap, which has allowed businesses to rely on workers with whom they already have a relationship. Such a step was taken as recently as fiscal year 2016. Flanagan says Congress could also eliminate the cap completely or find a way for it to fluctuate based on economic need. Several bipartisan bills have been introduced to address this in some way.

Back in Connecticut, Newman says that if more visas were to be released at this point in the season — which peaks from April until December despite a mid-summer lull — probably wouldn’t help.

“Releasing more visas now, it’s almost too little, too late to fix the situation for this year,” he says. “The biggest thing is just to have some sort of stability in the program so we know.” 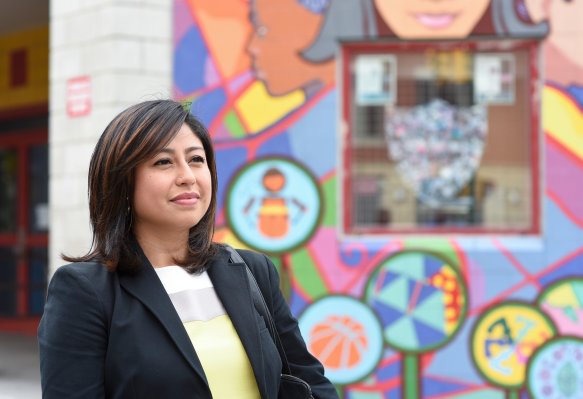 'It's Hard.' Immigration Activist Says President Trump Has Made Her Work Stressful
Next Up: Editor's Pick