Former U.S. President Barack Obama used his first major speech since leaving office to call out a global rise in authoritarianism and defend globalization, but did not directly address the current President, Donald Trump, as some thought he might.

Beginning his speech at the 2018 Nelson Mandela Annual Lecture in Johannesburg, South Africa, Obama said we are in “strange and uncertain times” with “head-spinning and disturbing headlines.” He went on to deliver an extensive defense of democracy while criticizing “strongman politics,” which he described as “ascendant.”

“In the west you’ve got far-right parties that oftentimes are based on platforms of protectionism and closed borders and barely hidden racial nationalism,” Obama said.

Obama chose not to directly reference Trump, who is being criticized by many Tuesday after a controversial appearance with Russian President Vladimir Putin. During a press conference with Putin following a summit between the two, Trump refused to back the U.S. intelligence community’s assessment that Russian hackers had interfered in the 2016 presidential election, leading many to view Trump as kowtowing to Putin. Trump’s attitude was particularly concerning for some given the ongoing investigation into potential collusion between his presidential campaign and officials in Moscow.

The only hacking Obama referred to was that of China, in reference to the United States’ allegations of intellectual property theft. Talking about trade, Obama first expressed his belief in the right for smaller economic powers to access wealthier markets. But he added that it is “right for the U.S. to insist on reciprocity” when it comes to countries that are no longer poor, like China, suggesting the U.S. should tell China to “stop taking intellectual property and stop hacking our servers.” While President, Obama formed an accord designed to reduce industrial espionage between China and the U.S., which was maintained by Trump’s administration in 2017.

Obama did call out several areas of disagreement with Trump, though only indirectly, defending the free press, criticizing misinformation and the spread of conspiracy theories via the internet, and slamming a culture of lying among politicians. “People just make stuff up,” Obama said. “There’s a loss of shame with politicians. When leaders are caught in a lie, they just double down and lie some more.”

He also referenced the Trump administration’s immigration policies and the practice of separating families at the border with Mexico, saying “there’s no excuse for immigration policies based on race or religion. We can enforce the law while respecting humanity. For a mother with a child in their arms, we should recognize that could be my family, my child.” 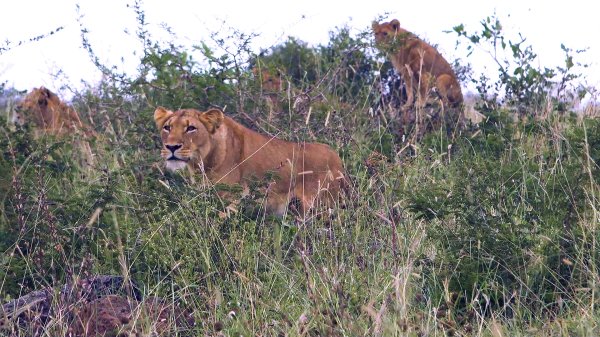 A Pride of Lions Killed and Ate a Group of Rhino Poachers Who Broke Into a Wildlife Reserve
Next Up: Editor's Pick