'Like a Little Wet Noodle.' Arnold Schwarzenegger Is Not Impressed by President Trump's Meeting With Vladimir Putin

Arnold Schwarzenegger is pumped up about President Donald Trump’s press conference with Russian President Vladimir Putin — and not in a good way.

The Terminator star and former governor of California, 70, slammed Trump in an Instagram video after the president held a press conference with Putin on Monday in Helsinki, Finland.

“President Trump, I just saw your press conference with President Putin and it was embarrassing. I mean, you stood there like a little wet noodle, like a little fanboy,” Schwarzenegger scolded in the video.

During the news brief, which came after the leaders met privately for over two hours, Trump seemed to accept Putin’s denial of interfering in the 2016 presidential election — despite findings to the contrary by U.S. intelligence agencies.

In his response video, the actor and longtime Republican teased that Trump looked like he was going to ask Putin for an “autograph” or a “selfie.” He added that Trump “sold out” his intelligence community, the justice system, and “worst of all, our country” during the press conference.

Schwarzenegger, who has attacked Trump over a number of issues in the past, wasn’t the only Republican to repudiate the president’s performance in Helsinki. 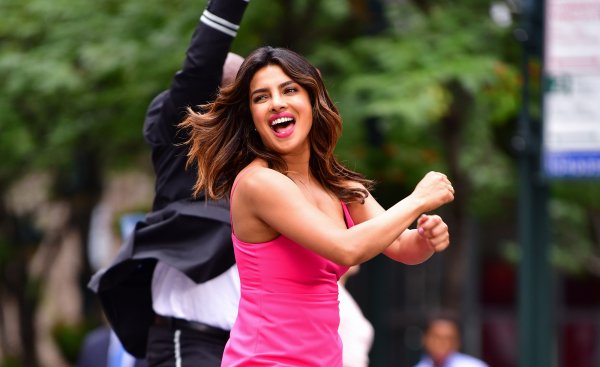 Here's Priyanka Chopra the Dancing Queen on the Busy Streets of New York
Next Up: Editor's Pick