The day of the Trump-Putin summit began slowly.

Russian President Vladimir Putin, notoriously late for official engagements, was delayed on his way from Russia to meet President Donald Trump in Finland, forcing Trump to cool his heels at the hotel.

Then, perhaps to regain the upper hand, Trump took his time leaving once Putin had arrived in the country so that Putin arrived at the meeting site before he did, extending the holdup even further.

By the time the two men met for the first time at the Presidential Palace in Helsinki on the day of their highly anticipated sit-down, they were already nearly an hour behind schedule.

But then the summit began in earnest with a stampede.

Twenty Americans and 20 Russians, including the 13 members of the White House press pool, of which TIME was a part, had been standing in an antechamber outside the room where the two presidents would be seen together for the first time. When a single door opened into the Gothic Hall, everyone tried to push through the narrow opening, shoving into each other, shouting and accidentally banging expensive camera equipment into the door frame. Once inside, a metal step-stool that someone hoisted overhead knocked into a delicate-looking chandelier on the wall, rattling the crystals.

If that mad scramble was a frenzied view of U.S.-Russia relations, the two leaders took a more relaxed approach in their first encounter. Once the press settled in place, Trump and Putin entered and sat on the blue velvet cushions of two adjacent chairs. Trump leaned forward with his hands tented in front of him; Putin adopted a casual stance, leaning back in his seat with his legs spread. After making statements and ignoring shouted questions about election meddling, Trump and Putin shook hands, and with that, the press pool was ushered out.

The entire day surrounding Trump and Putin was tightly choreographed, as high-level presidential summits often are. But rather than dulling the intensity of each moment, it heightened the anticipation, weighting each appearance of the two leaders with import. (Which, of course, is why official meetings with the U.S. president are an important tool in American foreign policy and aren’t granted lightly.)

The second glimpse of Trump and Putin came more than two hours after the first — when the press left, the leaders began a lengthy one-on-one meeting that would last roughly 40 minutes more than planned. Sweaty from an extended wait in a hot, sunny courtyard, journalists were brought back in for what turned out to truly just be a glimpse of the next phase of the day — they were sent back out after roughly one minute in the room. This time, the presidents were with their teams for an expanded meeting over a meal (it was originally billed as lunch, but by this point with all the delays in the schedule, it was 4:30 in the afternoon).

In a grand room largely devoid of other furniture, the American and Russian delegations were seated across from each other at a long table covered with a white tablecloth, wine glasses and fine-looking china. Both sides of the table were completely silent as the press entered, and sat stiffly as photographers snapped photos. With a quick answer from Trump to a shouted question saying he thought his long meeting with Putin was “a good start,” the journalists were sent back to their holding area to await the main event.

An hour later, the American pool reporters and their Russian counterparts were brought into the room for what the world had been waiting to see: Trump and Putin’s joint press conference. Hundreds of other journalists packed the room, most crowding into seats on the floor level jammed together with barely enough aisle space to accommodate knees, and others peering down from the balcony circling the top of the room.

Once the leaders entered, the content of the press conference delivered on the promise of the spectacle of the rest of the day. During the 46-minute event, Trump broke with his own intelligence chiefs on whether Russia meddled in the 2016 election, endorsed the idea of granting Russians access to U.S. intelligence officials in their own investigations, and made no mention of Russia’s annexation of Crimea. Putin publicly denied the “so-called interference” allegations and admitted that he had wanted Trump to win the election.

Read More: How Trump Ended Up Looking Weak in Front of Putin

The energy in the room was most palpable when either man touched on the hottest topic of the hour: Russian interference in American elections. When Putin first mentioned it during his opening statement— “The Russian state has never interfered and is not going to interfere into internal American affairs” — there was an audible intake of breath as American reporters leaned forward in their seats and prepared to transcribe the translated words coming through their headsets. Trump dropped a bombshell on the crowd when he said, “[Director of National Intelligence] Dan Coats came to me, and some others. They said they think it’s Russia. I have President Putin. He just said it’s not Russia. I will say this: I don’t see any reason why it would be.”

“I have confidence in both parties,” Trump said.

It was a historic press conference, one where an American president sided with the assurances of a Russian leader over his own intelligence community, congressional committees and Cabinet members on a matter of national security. Questions from two American journalists drew sharp responses from both presidents. When an Associated Press reporter asked Putin whether he had compromising material on Trump or Trump’s family, there were titters and nervous chuckles in the room. Staring intently at the correspondent, who he referred to as “distinguished colleague,” Putin said, “It’s difficult to imagine an utter nonsense of a bigger scale than this.”

After Trump and Putin exited the stage, the room erupted into chatter. Dozens of television reporters stood up to appear on the air, and writers pulled out their laptops to start typing. As one Russian reporter filmed herself walking down the aisle between the American press corps and the Russians, the only English words audible in her Russian-language broadcast were “fake news.”

Then the White House press pool was whisked out to the motorcade to Air Force One, as they, the thousands of people who had lined the streets of Helsinki to watch the motorcade roll by and others all over the world processed the stunning display they had just witnessed.

And apparently, Trump was digesting it too, and reflecting on the criticism that came pouring in from all sides. “As I said today and many times before, ‘I have GREAT confidence in MY intelligence people,” he tweeted from the presidential plane, somewhere in the air above the Atlantic Ocean, flying away from the dark night encroaching from the East. 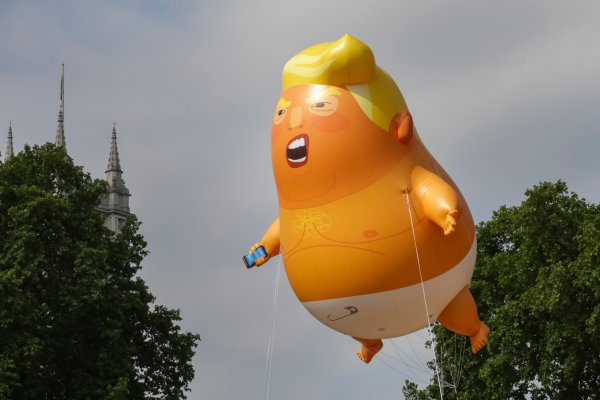 'Baby Trump' Protest Blimp May Be Headed to the U.S.
Next Up: Editor's Pick