Stephen Colbert went overtime to get into the “nitty crazy” of President Donald Trump’s press conference with Russian President Vladimir Putin on Monday, noting that, he was shaken to his core, but “at 54, there’s not a lot of core left.”

Colbert devoted a two-part “Double Stuf Oreo” version of The Late Show’s opening monologue on Monday night to Trump and Putin after the two leaders met for a summit in Helsinki on Monday. The meeting and Trump’s statements at their joint press conference, left Colbert shaken by questions of whether President Trump is “the Siberian candidate.”

“I’m thinking that maybe the most patriotic thing we can do right now, is not point out the alarming behavior of our president, which could be divisive. But instead, just take it until he’s gone,” Colbert joked with the audience. “Does anybody feel like just taking it?” The audience loudly said no, which reassured Colbert.“OK, me neither. I was worried there for just a second.” He then got into the “nitty crazy” of Trump’s press conference with Putin, which he classified as “treason.”

Despite the fact that their meeting came just days after the U.S. indicted 12 Russian military intelligence agents for allegedly hacking DNC servers ahead of the 2016 election, Trump seemed to side with Putin over the U.S. intelligence agencies. Trump said Putin vehemently denied charges of collusion saying that “he didn’t see any reason why it would be.” Colbert said he found that hard to believe. “You don’t see any reason? Do you own a mirror?” Colbert joked. “Because after throwing your intelligence community under the bus, you threw it in reverse and turned them into road burger.”

It wasn’t just Colbert who was alarmed by the president’s statements and actions. Even members of his own political party were dismayed by Trump’s actions. After reading a few reactions from both sides of the political aisle, Colbert said, “Wow! Those are the worst reviews I’ve seen since Titanic. And I don’t mean the movie.” 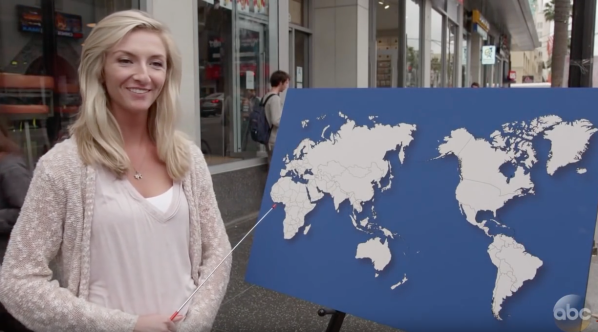 Jimmy Kimmel Asked People to Name One Country in the World and the Results Were Not Great
Next Up: Editor's Pick