I'm Bill Browder. Here's the Biggest Mistake Putin Made When Trying to Get Access to Me Through Trump

William Browder, chief executive officer of Hermitage Capital Management, takes his seat as he arrives for a Senate Judiciary Committee hearing titled 'Oversight of the Foreign Agents Registration Act and Attempts to Influence U.S. Elections' on July 27, 2017 in Washington, D.C.
Drew Angerer—Getty Images
Ideas
By Bill Browder
Browder is the founder and CEO of Hermitage Capital Management and was the largest foreign investor in Russia until 2005. He is a leading campaigner to expose Russia's corruption and human rights abuses. His new book is Freezing Order: A True Story of Money Laundering, Murder, and Surviving Vladimir Putin's Wrath

I wasn’t watching the Donald Trump–Vladimir Putin press conference from Helsinki. But when my phone started burning up with messages, I knew something was going on. I quickly discovered that Putin had mentioned me by name. No journalist had asked about me. He just brought me up out of the blue.

Putin offered to allow American investigators to interview the 12 Russian intelligence agents just indicted by Special Counsel Robert Mueller in exchange for allowing Russians to have access to me and those close to me. This is no idle threat. For the last ten years, I’ve been trying to avoid getting killed by Putin’s regime, and there already exists a trail of dead bodies connected to its desire to see me dead. Amazingly, Trump stood next to him, appearing to nod approvingly. He even later said that he considered it “an incredible offer.”

I’m lodged so firmly under Putin’s skin because I’m the person responsible for getting the Magnitsky Act passed in the United States in 2012. This is a law that allows the U.S. government to freeze assets and ban visas of human-rights violators around the world. Some of these human-rights violators had killed Sergei Magnitsky, my Russian lawyer who was murdered in a Moscow jail for uncovering a massive $230 million government-corruption scheme that we’ve since traced to known Putin cronies. In essence, Putin received some of the proceeds of this crime, and he is terrified that the Magnitsky Act could be applied to his offshore fortune, which is probably one of the largest amassed in modern times.

The Helsinki summit is not the first time my name has come up at a Putin press conference. Back in 2006 at the G-8 Conference in St. Petersburg, a young reporter for the Moscow Times asked why I’d been denied an entry visa to Russia and declared a threat to national security, all with no explanation. She pointed out that I was the biggest foreign investor in the Russian stock market, and that the prime minister of the United Kingdom had asked Putin about my situation earlier that day.

Putin frowned. “To be honest, I don’t know why this particular person has been refused entry to Russia. I can imagine that this person has broken the laws of our country, and if others do the same we’ll refuse them entry, too.”

“This person.” Putin almost never utters the names of his enemies — except for mine, which he lately seems to utter at every opportunity. To my mind, this can only mean that he is seriously rattled.

Since 2012, Putin has made it perhaps his largest foreign policy priority to have the Magnitsky Act repealed. But none of his efforts have worked. Not only has it not been repealed, it’s spread to six additional countries, including the United Kingdom, Canada, the Baltic states and Gibraltar. There are eight other countries with Magnitsky Acts on deck: Sweden, France, Germany, the Netherlands, Denmark, Australia, South Africa and Ukraine. The Magnitsky Act is going viral, and countries that have Magnitsky Acts are sanctioning Putin’s cronies, who I imagine soon will be sanctioned by other countries as well.

In addition, the Global Magnitsky Justice Campaign has investigated and found the $230 million that Sergei Magnitsky exposed and was killed over. There are now a number of live law-enforcement investigations around the world determining just who benefited from this crime. These have resulted in tens of millions of dollars of frozen assets. Furthermore, these investigations don’t only put at risk the beneficiaries of this crime, but the benificiaries of many other similar crimes. These people are ready to kill to keep their money. Losing it would be devastating.

Putin’s latest allegation that I donated $400 million to Hillary Clinton is so ludicrous and untrue that it falls into delusion. I’ve never made a political donation to Hillary Clinton or any other political candidate. It’s in the same category as other Russian government allegations against me: they accused me of being a serial killer; they accused me of being a CIA/MI6 agent determined to destroy the Russian government; and they accused me of somehow stealing $4.8 billion of IMF money back in the 1990s that was destined for the Russian Treasury. These guys have seriously lost their cool and are beginning to make mistakes.

The biggest mistake that Putin made in his offer today to effectively swap me for the 12 Russian agents is that he went to the wrong head of state. Although I was born in America, I emigrated to the United Kingdom 29 years ago and am a British citizen. If he really wants me, he better go talk to Theresa May, who might have a few choice words for him after Russian agents spread the military-grade nerve agent Novichok across the cathedral town of Salisbury, England. 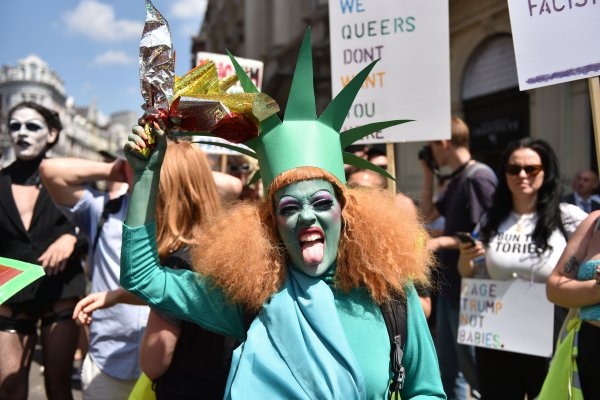 A Trump 'Dalek' in a Red Tie Has Taken to the Streets of London
Next Up: Editor's Pick