After President Trump and President Putin’s one-on-one summit in Helsinki, Finland, on Monday, host Chris Wallace asked Putin about the fate of his Russian political enemies in a Fox News interview.

“Why is it that so many of the people that oppose Vladimir Putin end up dead or close to it?” Wallace asked, listing off some well-known opposers of the Russian president who have died, including Boris Nemtsov and investigative reporter Anna Politkovskaya, as well as former Russian double-agent Sergei Skripal, who survived a nerve agent attack in Britain in March.

Wallace pushed back saying that those people don’t “end up dead.”

“Well, not always —well, haven’t presidents been killed in the United States? Have you forgotten about — well, has Kennedy been killed in Russia or in the United States? Or Mr. King?” Putin said, referencing the deaths of former President John F. Kennedy and civil rights leaders Martin Luther King, Jr. “What happens to the clashes between police and, well, civil society, and some —several ethnic groups? Well, that’s something that happens on the U.S. soil. All of us have our own set of domestic problems.”

Putin also addressed domestic crimes in Russia, saying it is a “side effect” of the Russian state growing.

The Russian President went on to say “nobody” gives him evidence in instances of suspected foreign assassination attempts. He said he wanted documents as evidence in the Skripal Novichok poisoning case.

“But nobody gives it to us. It’s the same thing as the accusations with meddling into the election process in America,” he said. “We recently heard that two more people suffered from the same nerve agent that is called Novichok. I have never even heard the last names of these persons. Who are they?” 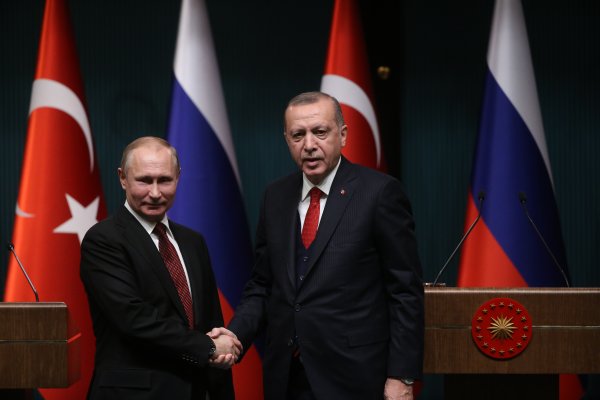 How President Erdogan Is Turning Turkey Into Putin's Russia
Next Up: Editor's Pick