A Harvard employee might be the next Permit Patty.

A video of a woman asking a young mother and her biracial daughter whether they lived in the “affordable units” or the “Harvard units” of an apartment building in Boston went viral on Facebook Monday.

The woman, since identified as Theresa Lund, accuses mother Alyson Laliberte and her daughter of playing too loudly on the stairs of the building and disturbing her own children who were taking a nap upstairs.

Lund questions Laliberte’s right to be on the property and expressed doubt that she lived in the building. She also directly addressed Laliberte’s daughter, saying “I’m sorry that we’re arguing with your mommy. She’s not being very nice.”

“Are you just mad because I won’t get off my own property?” Laliberte asks Lund.

She asks who is watching Lund’s children upstairs, at which point Lund asks which housing unit Laliberte lives in. “Are you in one of the affordable units? Or one of the Harvard units?”

Laliberte posted the video on Facebook over the weekend, and wrote that she felt Lund was being discriminatory.

“She followed me around and harassed me trying to get my information and apartment number as if she had a right to know” Laliberte wrote. “When I wouldn’t tell her, she proceeded to ask me if I lived in the ‘affordable apartments’ of the building for Cambridge residents or if I lived in one of the Harvard-owned apartments (which is all the same building anyways). It was totally discriminating and racist of her.. or maybe it was because my daughter is biracial who knows… Why do people think they are literally better than others? Why does she think she has a right to make us move?”

Laliberte also wrote that she had lived in the apartment complex for 15 years and no one had ever made a complaint against her.

Lund is the executive director of the Harvard Humanitarian Initiative (HHI), which caused some on social media to point out the hypocrisy of her line of questioning compared to her job description. Her bio on HHI’s website appears to have been deleted, but the Boston Globe secured a web archive of the page.

The video, which has been viewed more than 1 million times on Facebook, prompted an apology from Lund. She posted a now-deleted screen shot of an apology, as well as emailed an apology to the Boston Globe.

She said her response was “inappropriate and wrong” and that she was “terribly sorry.”

“I want to be accountable for my actions in a situation where I fell far short of my values and what I expect of myself,” Lund wrote. “This clearly wasn’t my best moment, and I have work to do to more consistently be my best self.”

She also said should not have “should not have addressed [Laliberte’s] daughter, and there was no reason for me to ask what type of unit she lives in.”

Lund said she offered an in-person apology to Laliberte and her daughter on Sunday morning.

“I love our community and am committed to engaging in dialogue and actions about how to make it more welcoming and pleasant for all of us to live in together,” she wrote in her email to the Globe.

Harvard officials could not immediately be reached for comment. 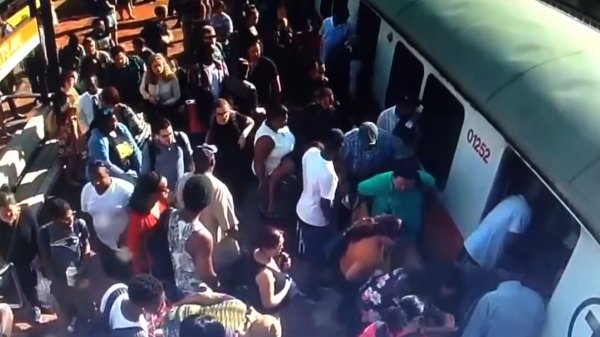 Boston Commuters Band Together to Free Woman Caught Between Train and Platform
Next Up: Editor's Pick