Mariia Butina, a self-described Russian gun rights activist with links to the National Rifle Association, has been arrested by the FBI on charges she was acting as a Russian agent in an orchestrated effort to infiltrate American political organizations.

The Justice Department said in court filings that the 29-year-old woman worked to establish “back channel” lines of communication with U.S. politicians to “advance the agenda of the Russian Federation” from as early as 2015 and continuing through at least February 2017.

Butina, who attended at least two Trump campaign events to ask the then-candidate Russia-related questions, worked at the direction of a high-level Kremlin official who was previously a member of the legislature of the Russian Federation and later became a top official at the Russian Central Bank, the documents said.

Butina, who resided in the United States on a student visa, set up a series of dinners in Washington and New York between Russian nationals and Americans with influence with the U.S. political system, according to the filings. “She undertook her activities without officially disclosing the fact that she was acting as an agent of Russian government, as required by law,” the Justice Department said.

The documents were made public Monday mere hours after President Donald Trump stood beside his Russian counterpart, Vladimir Putin, after a joint summit in Helsinki. At the press conference afterward, Trump bashed the investigation led by Special Counsel Robert Mueller into Russian meddling and declined to criticize Putin for interfering in the election.

The charges also came after the Justice Department unveiled an indictment last week against 12 Russian military-intelligence officers for conspiring to hack the Democratic National Committee, Hillary Clinton’s campaign and state boards of election in 2016.

Taken together, the documentation shows a sweeping campaign at multiple levels of the Russian government to influence the outcome of the 2016 elections to the candidates whom they favored.

The documents against Butina, who also spells her first name Maria, were filed by the Justice Department, not the special counsel. The DOJ said she was arrested Saturday in Washington and made her initial appearance Monday before Magistrate Judge Deborah A. Robinson in the U.S. District Court for the District of Columbia. She was ordered held pending a hearing set for Wednesday.

According to the Justice Department’s complaint, federal investigators seized Butina’s electronic devices, including her laptop and iPhone, containing Twitter direct messages that showed coordination with an unnamed Russian official.

Robert Driscoll, a Washington lawyer representing Butina, told TIME in an email that his client was innocent and had been cooperating with “various government agencies for months.” He added that Butina voluntarily appeared “months ago” before the Senate Select Committee on Intelligence and “testified for 8 hours and produced thousands of documents.” She offered to do the same for the special counsel but Mueller’s team declined, Driscoll said.

“There is simply no indication of Butina seeking to influence or undermine any specific policy or law in the United States – only to promote a better relationship between the two nations,” he said, adding that over a dozen FBI agents executed a search warrant at her Washington apartment in April.

On her LinkedIn page, Butina says she studied at American University for a master’s degree in International Service with “a concentration in cyber policy.” (An American University spokeswoman confirmed she graduated in May.) Butina became well-known around Washington because of her odd self-promotion as a Russian gun rights activist. She stuck out — not only because there is no substantive gun rights movement in Russia — but also because of her outreach to Republicans. At the time around the 2016 election cycle, it marked a dramatic shift in Russia’s attempts to influence U.S. domestic politics. During the Cold War, the Kremlin tried to forge links to the American left.

But, as TIME reported in March 2017, dinners organized by Butina were becoming a subject of interest. One such gathering, described as “friendship & dialogue dinners,” by the Justice Department, on Feb. 1, 2017 a group that piled into Bistro Bis, a swanky French joint on Capitol Hill, a Washington institution that has hosted all sorts of political summits over the years. For four hours, current and former Russian officials dined with two Republican Congressmen, a conservative magazine publisher, a longtime GOP consultant and a close friend of top White House strategist Steve Bannon.

“We have so many people who are trying to destroy the relationship between Russia and the United States,” Republican Rep. Dana Rohrabacher of California, who attended the dinner and has visited Russia at least a half-dozen times over the past five years, told TIME soon afterward. “I’m trying my best to expand the amount of personal contacts we have with people who are engaged in government in Russia.”

Read More: Moscow Cozies Up to the Right

One of the officials who attended the dinner was a deputy central banker and former Russian senator named Alexander Torshin, who appears to be the unnamed Russian official in the court documents. He has been part of a years-long campaign to build connections between Russia’s leaders and American conservatives. The crusade, which predates the rise of Trump, has achieved significant success, sparking new alliances with leading U.S. evangelicals, lawmakers and powerful interest groups like the NRA.

In 2015, a collection of NRA officials flew over to Russia to attend Butina’s annual gun conference, the Right to Bear Arms, details of which were included in a report from Democrats on the House Permanent Select Committee on Intelligence made public on March 26.

Among them was Paul Erickson, a veteran Republican activist and longtime NRA member who attended the Feb. 1 dinner; former NRA and ACU chief David Keene; gun manufacturer and NRA first vice president Pete Brownell; and then-Milwaukee County sheriff David Clarke, a Trump supporter now at America First Action, a pro-Trump super PAC. One of their hosts was Russian Deputy Prime Minister Dmitry Rogozin, who was sanctioned by the White House in 2014 in connection with Russia’s invasion of Ukraine. According to a disclosure filed by Clarke, Butina’s group shelled out $6,000 for the sheriff’s meals, lodging, transportation and other excursions on the trip. The NRA did not respond to a request for comment.

In April 2015, Butina and Torshin traveled to Tennessee to attend a fundraiser for a political group backing the presidential campaign of Wisconsin Gov. Scott Walker, then viewed as a leading contender for the GOP nomination. In July, she attended Walker’s campaign kickoff in Wisconsin. The same week, Butina flew to Las Vegas for one of Trump’s first campaign events. She stood up and asked Trump whether he would end the “damaging” U.S. government sanctions on Russia. “I know Putin, and I’ll tell you what, we’ll get along with Putin,” he responded. “I don’t think you’d need the sanctions.”

She asked him a similar question about U.S.-Russia relations during an event in North Dakota: “I don’t think you’d need the sanctions,” he said. “I think we would get along very, very well.” In February 2017, Butina helped assemble the delegation of Russians who attended the National Prayer Breakfast. The group of 16 included Kremlin advisers, university presidents and the mayor of an eastern Russia city.

In the summer of 2015, Butina wrote an article in the National Interest, a magazine published by the Center for the National Interest, about her hopes for a thaw in the two nations’ relationship, proclaiming: “It may take the election of a Republican to the White House in 2016 to improve relations between the Russian Federation and the United States.” 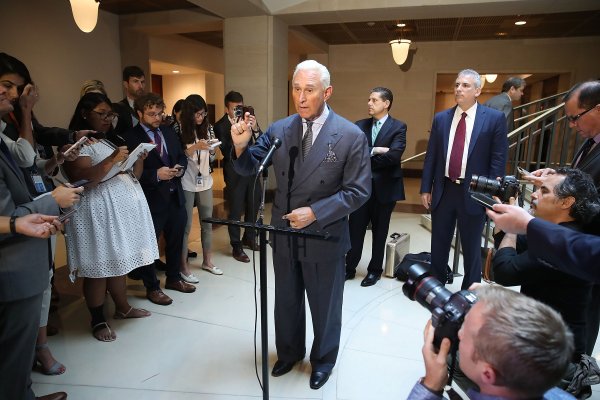 Roger Stone 'Probably' Mentioned in the Russia Indictment
Next Up: Editor's Pick