Here's Who Found That Russia Meddled in the 2016 Election

By Abby Vesoulis and Abigail Simon

He was also disagreeing with U.S. intelligence agencies; two congressional committees that investigated the issue; his own Defense secretary, director of national intelligence and national security adviser; and private cybersecurity experts.

At a joint press conference Monday in Helsinki, Trump declined to criticize Putin for meddling in the election, called his denial “powerful” and criticized the special counsel’s investigation as a “total witch hunt.”

“My people came to me, [Director of National Intelligence] Dan Coats came to me and some others, they said they think it’s Russia. I have President Putin; he just said it’s not Russia,” Trump said. “I will say this: I don’t see any reason why it would be.”

Here’s a closer look at the U.S. agencies and people who have said that Russia meddled in the election.

A report issued by high-ranking American intelligence officials in January of 2017 concluded that Russian operatives reporting to Putin interfered in the 2016 presidential election in favor of Trump. It was drafted and compiled by the CIA, the FBI and the National Security Agency.

The document stated that Putin “ordered an influence campaign in 2016 aimed at the U.S. presidential election” aiming to “denigrate Secretary Clinton” and showing a “clear preference for President-elect Trump.”

On July 3, 2018, the Senate Select Committee on Intelligence issued a bipartisan report which asserted that the intelligence community’s findings on Russian meddling were fairly and professionally done and that more evidence had since come forward.

“As the inquiry has progressed since January 2017, the Committee has seen additional examples of Russia’s attempts to sow discord, undermine democratic institutions, and interfere in U.S. elections and those of our allies,” the report noted.

On April 27, 2018, the House Permanent Select Committee on Intelligence released a report written by the committee’s Republicans which found no evidence that the Trump campaign worked with Russia to interfere with the election.

But that report did find that Russia had tried to meddle.

“In 2015, Russia began engaging in a covert influence campaign aimed at the U.S. presidential election,” it said. “The Russian government, at the direction of President Vladimir Putin, sought to sow discord in American society and undermine our faith in the democratic process.”

In February, the Justice Department indicted 13 Russian operatives and three companies on charges related to waging “information warfare against the United States of America” and interfering with the election to help the Trump campaign.

“The goal of the conspirators was to have an impact on the election. What impact they may have had … is a matter of speculation; that’s not our responsibility,” Rosenstein said, though he also noted Friday’s charges included “no allegations of knowing involvement by anyone on the campaign and no allegations that the alleged hacking affected the election result.”

The current Director of National Intelligence, Dan Coats, has frequently warned his government colleagues of the dangers Russia poses to America’s cybersecurity.

“The warning signs are there. The system is blinking. It is why I believe we are at a critical point,” Coats said, while addressing the Hudson Institute in Washington, D.C., on Friday. “Today, the digital infrastructure that serves this country is literally under attack.”

Coats called Russia the “most aggressive foreign actor, no question.”

The current U.S. Defense Secretary, James Mattis, has tentatively backed the findings of the U.S. intelligence agencies, reaffirming on multiple occasions that America has likely faced Russian meddling in its elections.

When asked by press in December, 2017 about whether he believed Russian interference took place during the 2016 presidential campaign, Mattis said, “Yes, I believe they did.” Later, in February, Mattis announced that “there is very little doubt that they [Russia] have either interfered or attempted to interfere in a number of elections in democracies.”

Mike Pompeo, now Secretary of State, asserted there is agreement among intelligence officials that Russian meddling took place, during remarks he made while he was still CIA director in June of 2017.

“I am confident that the Russians meddled in this election, as is the entire intelligence community,” Pompeo said. “This threat is real.”

Bolton, Trump’s National Security Adviser, has also indicated he believes Russians interfered in the election, and said Putin probably knew about it.

Bolton told ABC’s Jonathan Karl that he found it “hard to believe” Putin didn’t know about Russian military intelligence officials’ efforts to interfere in the elections.

Bolton said Putin “made it plain that he said the Russian state was not involved,” when the pair met in Moscow ahead of the Trump-Putin summit. Putin “was very clear with his translator that [state] was the word that he wanted,” Bolton said.

During a press conference in February of this year, Press Secretary Sarah Sanders acknowledged Russian involvement, but denied it had any impact on election results. 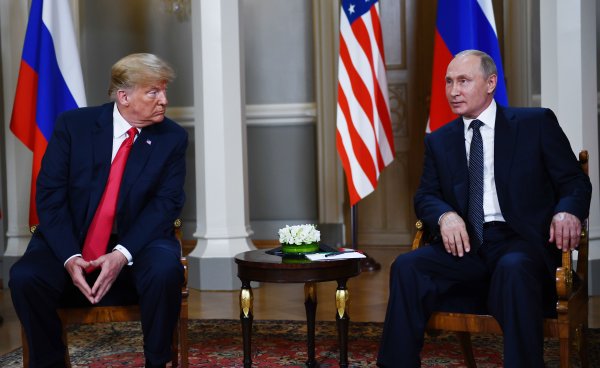 ‘We Agree.’ Russia Chimes In After Trump Blames the U.S. for the Countries' Bad Relationship
Next Up: Editor's Pick