Trump Wouldn't Say If Russia Meddled in the Election. Republicans in Congress Disagreed

After Trump declined to criticize Russian meddling and noted that Russian President Vladimir Putin “powerfully” denied it at a press conference after a summit in Helsinki, several Republicans said that the country did in fact interfere.

“There is no question that Russia interfered in our election and continues to attempt to undermine democracy here and around the world,” Ryan said in a statement. “That is not just the finding of the American intelligence community but also the House Committee on Intelligence. The president must appreciate that Russia is not our ally. There is no moral equivalence between the United States and Russia, which remains hostile to our most basic values and ideals. The United States must be focused on holding Russia accountable and putting an end to its vile attacks on democracy.”

House Majority Leader Kevin McCarthy echoed with a similar statement of his own defending the intelligence community’s findings, as did did Rep. Trey Gowdy, the chairman of the House Oversight committee. “Russia attempted to undermine the fundamentals of our democracy, impugn the reliability of the 2016 election, and sow the seeds of discord among Americans,” he said. He noted it was imperative for members of the Trump administration to tell the President Russia could have meddled without delegitimizing his victory.

Senator Richard Burr, the Chairman of the Senate Intelligence Committee, which recently concluded in a report examining the legitimacy of the intelligence community’s claims that Russian meddling was indisputable, said outright that Putin was lying. “Vladimir Putin is not our friend and never has been. Nor does he want to be our friend. His regime’s actions prove it.” said Burr. “We must make clear the United States will not tolerate Russian activities against us or our allies.”

Senate Majority Leader Mitch McConnell did not issue a statement, but told reporters on Capitol Hill that he stands by the intelligence community’s assessments. “I’ve said a number of times and I’ll say it again. The Russians are not our friends,” McConnell said.

Five Republican senators who have disagreed with Trump in the past — Sens. Jeff Flake and John McCain of Arizona, Ben Sasse of Nebraska, Susan Collins of Maine Lindsay Graham of South Carolina — also spoke out.

“I never thought I would see the day when our American President would stand on the stage with the Russian President and place blame on the United States for Russian aggression. This is shameful,” Flake, who declined to seek re-election this year and has frequently criticized Trump, said in a statement.

McCain, who is battling brain cancer and had said Trump shouldn’t meet Putin if he couldn’t hold him accountable, called the press conference “one of the most disgraceful performances by an American President in memory” and said the meeting as a whole was a “tragic mistake” that lacked precedent.

”No prior President has ever abased himself more objectively before a tyrant,” said McCain.

Sasse, another frequent critic of Trump, called the comments “bizarre and flat out wrong.” “When the President plays these moral equivalence games, he gives Putin a propaganda win he desperately needs,” Sasse said in a statement.

Graham also said that Trump handed Putin an easy victory because he missed an opportunity to hold him accountable. “This answer … will be seen by Russia as a sign of weakness and create far more problems than it solves,” he said in a statement on Twitter. “Bad day for the U.S. Can be fixed. Must be fixed.”

Sen. Bob Corker of Tennessee, chairman of the Senate Foreign Relations Committee and another Trump critic who is not running for re-election, told CNN that Putin “gained a tremendous amount” from the press conference.

“I did not think this was a good moment for the country,” he said.

Collins, who said the Russians’ efforts to interfere were “relentless” are still continuing, said Trump’s position could impede efforts to stop future meddling. “This position is untenable and at odds with the forceful response this moment demands,” she wrote on Twitter. “Given that we are in an election year, the need to act now to prevent malicious attempts to influence our democracy is urgent.”

Other Republicans took to Twitter to register their disapproval. 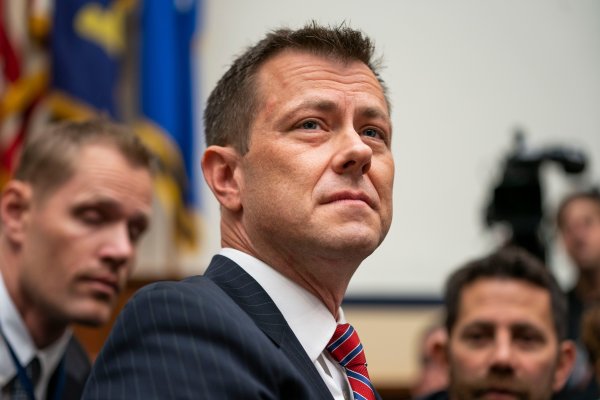 3 Moments That Actually Mattered at the Peter Strzok Hearing
Next Up: Editor's Pick