Right before President Donald Trump and Russian President Vladimir Putin appeared for their joint press conference at Helsinki on Monday morning, a man identifying as a journalist was forcibly removed from the room after holding up an 8.5 by 11 inch piece of paper that read “Nuclear Weapon Ban Treaty.”

A spokeswoman for the publication confirmed to Yahoo News that the man was Sam Husseini, from the Nation. The spokesperson said Husseini had been credentialed to cover the event for the American-outlet and that the magazine was “troubled” by Husseini’s removal.

Before the press conference, Trump and Putin met alone to discuss trade, nuclear arms and China. Trump also told reporters he would ask Putin about Russian interference in the 2016 election, but said he did not believe Putin would admit to anything. 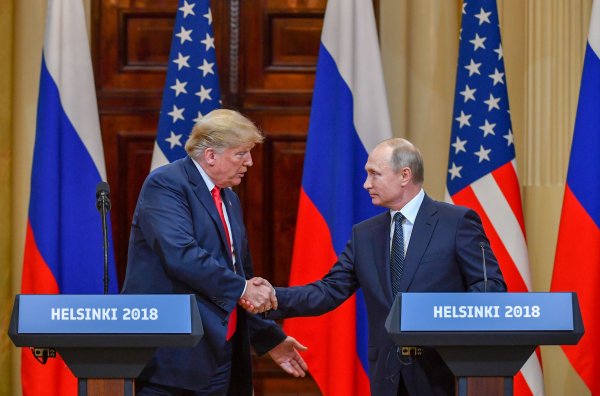 Trump Sides With Putin on Meddling
Next Up: Editor's Pick