What’s Going on With Elon Musk? How the Happy Billionaire Rocket Scientist Became a Cautionary Tale

But Elon Musk does not appear to be having any fun at all lately. That’s not just because of continued delays in the development of his Dragon spacecraft, which may not be ready to carry crews to the International Space Station until 2020, three years behind schedule. And it’s not just because of the two fatal accidents, in 2016 and 2018, involving people using the autonomous driving function in one of Musk’s Teslas. Those are setbacks — in the case of the Tesla deaths, tragic setbacks — that can be an unavoidable part of any big operation trying to do ambitious things.

Musk’s problems lately are more about, well, Musk — a recent combativeness that has been coming in smackdowns and tweetstorms that threaten to turn the one-time wünderkind into just another media troll. The latest and easily most egregious case involves his growing feud with British diver Vern Unsworth, who played a key role in the recent rescue of twelve boys and their soccer coach from a flooded cave in Thailand.

Shortly after the rescue efforts began, Musk stepped into the center of the surrounding media storm with offers to send drilling teams and a child-sized submarine to lend a hand in the work. That seemed to a lot of people less like helping than headline-grabbing, a FOMO-fueled need to insert himself into a drama that had nothing to do with him — especially since what Musk was offering was of uncertain worth, while what was on-site already were rescuers and first responders who do this kind of work for a living. Things turned personal when Unsworth dismissed Musk’s efforts as a PR stunt and told to “stick his submarine where it hurts.”

Musk answered that schoolyard tweak with a nuclear tweet, labeling Unsworth a “pedo,” presumably a pedophile, and responding “Bet ya a signed dollar it’s true,” when his followers objected. Both tweets were quickly deleted, though not fast enough to stop Unsworth from announcing that he is pursuing legal action. Whatever the prospects for any lawsuit, Musk lost big in the public-opinion courtroom. The man in the wetsuit who goes into a cave beats the man in the business suit who owns a big company — and that ought to have been axiomatic to someone as media-savvy as Musk.

This followed another public dust-up in May, when Musk, responding to negative coverage of Tesla’s production and design woes, tweeted out his criticism of the “holier-than-thou hypocrisy of big media companies” that publish only enough truth “to sugar-coat the lie.” He then announced that he was launching a website to fact-check the news — allowing users to weigh in on whether or not a story is true. The comparisons to President Donald Trump’s repeated cries of “fake news” were unavoidable.

Musk, like Trump, long benefited from the sugar high of an uncritical media: with Trump, it was the saturation coverage of his rallies in 2016; with Musk, it’s been the fawning comparisons to Tony Stark and the often-credulous coverage of his giddy promises — to send two paying passengers around the moon this year or to have human beings on Mars by 2024. (TIME covered both stories here and here.) And like Trump too, Musk seems to need to hit back hard when the questions get tougher and the coverage gets less favorable.

The comparisons between the two men clearly have limits. Trump was always a social media provocateur, saying the outrageous thing, giving voice to the dark idea; the fury that he elicited was a feature, not a bug. Musk was a defter, decidedly happier media figure. When he was making his first attempt to land a rocket upright, he memorably tweeted, “If this works, I’m treating myself to a volcano lair. It’s time.” When those landing attempts repeatedly failed, he posted a video compilation of the crashes on his own Instagram account, set to a Monty Python soundtrack.

Those were the posts of a person who is, or was, equal parts self-aware and deeply secure, which makes Musk’s current descent into petulance and defensiveness especially head-snapping. Still, that kind of public self-immolation is hardly unique to him. Many an entrepreneur, performer or politician has displayed it after the spotlight they’ve been enjoying turns to someone else or the one that is still shining on them is, for the first time, showing their flaws.

If that’s what’s happening to Musk — if he feels the heat and shows the ugly — then there will likely be more of his angry performance art to come. He picked a hard business — a hard bunch of businesses actually — and none of them is going to get any easier. People, just like rockets, can crash and burn — and when that happens, there’s no funny soundtrack playing along. 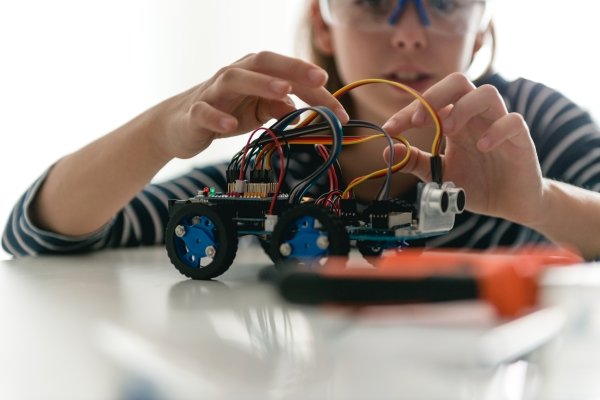 This Is How to Encourage Girls to Pursue STEM Careers
Next Up: Editor's Pick