‘We Agree.’ Russia Chimes In After Trump Blames the U.S. for the Countries' Bad Relationship

As President Donald Trump prepared to meet Russian President Vladimir Putin Monday, Russia’s Ministry of Foreign Affairs said in a tweet it agrees with Trump’s earlier message that U.S. “foolishness and stupidity” is the reason for a low point in relations between the two countries.

“Our relationship with Russia has NEVER been worse thanks to many years of U.S. foolishness and stupidity,” Trump tweeted on Monday morning.

Trump sent the tweet early Monday morning from Helsinki, where he was preparing to meet Putin for the first time since November 2017. The two leaders were scheduled to meet alone on Monday, accompanied solely by interpreters, for up to 90 minutes. Putin showed up an hour late for the meeting.

The U.S.-Russian relationship has been marred by a number of recent complications, not least of which are allegations that Moscow tampered with the 2016 U.S. presidential elections. In his Monday morning tweet, Trump referenced those charges, and investigations into possible collusion between his campaign and Russia, as a “rigged witch hunt.”

Earlier, Trump had personally congratulated Putin for putting on “one of the best ever” World Cup tournaments, following France’s victory in the final on Sunday. 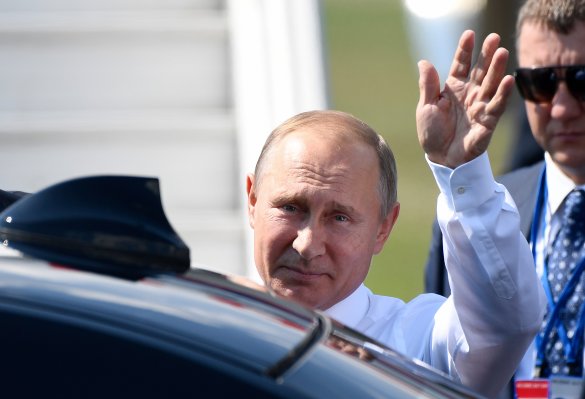 The Trump-Putin Summit Makes Finland Nervous About History Repeating Itself
Next Up: Editor's Pick