Twelve boys and their soccer coach who were rescued last week after being trapped in a Thai cave for 18 days have offered condolences for a diver who lost his life in the effort to save them.

Petty Officer Samarn Kunan, 38, was a former Thai Navy SEAL who volunteered depositing oxygen tanks for rescue divers throughout the flooded tunnels of Tham Luang cave, a sprawling underground complex where the youth soccer team had been trapped by floodwaters.

A fellow diver found Samarn unconscious in the water in the early hours of July 6; authorities said he died from lack of oxygen after several attempts to revive him failed. He was the only fatality of the monumental search and rescue mission that involved more than a thousand people and lasted more than two weeks.

The rescued team members, still recovering in a hospital in the nearby city of Chiang Rai, were told of his death Saturday after doctors determined that they were in a strong enough mental state to learn the tragic news, according to Agence France-Presse.

The "Wild Boars" soccer team and their coach rescued from a flooded cave pose with a drawing picture of Samarn Kunan, a former Thai navy diver who died working to rescue them, at the Chiang Rai Prachanukroh Hospital, in Chiang Rai, Thailand July 14, 2018.
Handout/Reuters

“All cried and expressed their condolences by writing messages on a drawing of Lieutenant Commander [Samarn] and observed one minute of silence for him,” said Jedsada Chokdamrongsuk, permanent secretary at the health ministry, said in a statement. “They also thanked him and promised to be good boys.”

The boys, all members of the Wild Boars soccer team between the ages of 11 and 16, and their coach, 25-year-old Ekkapol Chantawong, entered the cave for a birthday outing on June 23, when they were trapped inside by sudden monsoon rains. The ensuing search and rescue operation involved dozens of Thai SEALs, international expert divers, and assistance from more than half a dozen foreign governments.

Samarn has been hailed as one of the mission’s many heroes.

The saga of the trapped team gripped the nation and kept the world on tenterhooks as rescuers raced against depleting oxygen and approaching storms. Divers brought them out of the cave by giving them a mild sedative, fitting them with full-face masks and carrying them on stretchers and pulleys through an hours-long obstacle course of cold, dark water and jagged passageways. They were transported by helicopter and ambulance to a nearby hospital, where they were found to be in generally good health, and they are expected to be discharged Thursday. 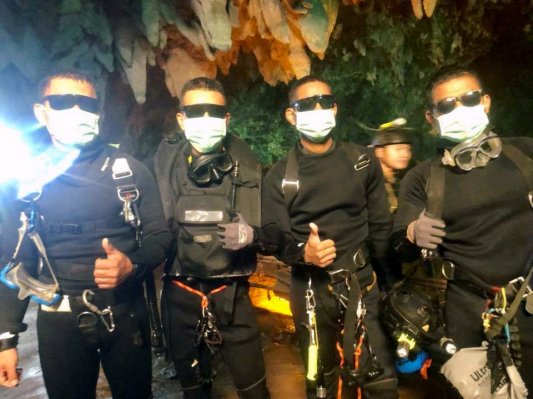 Thailand's Navy SEALs Will Add Cave-Diving to Training
Next Up: Editor's Pick