Justice Kennedy’s retirement has prompted a chorus of cries by Democrats to resuscitate a seemingly unlikely idea: “packing” the Supreme Court.

For would-be packers, expanding the court from nine to 11 justices, if and when the Democrats take back executive and legislative power, provides the only opportunity to regain a liberal majority on the court. A packing approach, in proponents’ view, is justified by the need to “fight dirty” in exigent times. The equally vociferous refrain of anti-packers worries about protecting the integrity of court: It’s not worth compromising the institution, they say, for a temporary policy result.

The battle over court packing is being fought on the wrong terms. Americans of all political stripes should want to see the court expanded, but not to get judicial results more favorable to one party. Instead, we need a bigger court because the current institutional design is badly broken. The right approach isn’t a revival of FDR’s court packing plan, which would have increased the court to 15, or current plans, which call for 11. Instead, the right size is much, much bigger. Three times its current size, or 27, is a good place to start, but it’s quite possible the optimal size is even higher. This needn’t be done as a partisan gambit to stack more liberals on the court. Indeed, the only sensible way to make this change would be to have it phase in gradually, perhaps adding two justices every other year, to prevent any one president and Senate from gaining an unwarranted advantage.

Such a proposal isn’t unconstitutional, nor even that radical. There’s nothing sacred about the number nine, which isn’t found in the constitution and instead comes from an 1869 act of congress. Congress can pass a law changing the court’s size at any time. That contrasts it with other potentially meritorious reform ideas, like term limits, which would require amending the constitution and thus are unlikely to succeed. And countries, with much smaller populations, have much larger high courts. In 1869, when the number nine was chosen, the U.S. was roughly a tenth of its current size, laws and government institutions were far smaller and less complex, and the volume of cases was vastly lower. Supreme Court enlargement only seems radical because we have lost touch with the fundamentals of our living, breathing constitution. The flawed debate over court-packing is an opportunity to reexamine our idea of what a Supreme Court is, and some foundational, and wrong, assumptions.

The court’s current design is troubling. Proof is found in a commonplace observation at every mid-term and presidential election, when it is said that the most critical outcome of the election will be the one or handful of justices appointed to the Supreme Court by the President. The refrain has become so common that we have become blind to its frightening implications. How could it be that the most important decision a President makes is picking one non-elected lawyer, distinguished at this point mainly by their ability to avoid ever saying anything controversial, to a court that decides cases at an average rate of one or two a week?

Our framers’ conception of constitutional interpretation was far more complicated, messy, and democratic. Constitutional interpretation was seen as fundamentally in the hands of the people, not of courts, much less of nine unelected justices, as Larry Kramer and others have cogently demonstrated. Judicial supremacy, the idea that the court is the ultimate interpreter of the Constitution, took off later, arguably not gaining wide acceptance until the past half-century. In that transition, we the people abdicated our constitutional role—creating and interpreting fundamental rights as part of an ongoing process—to a non-transparent, non-democratic, non-representative body of nine. That is dangerous: we are taught, from our earliest civics courses, to revere the court as higher, more “supreme,” and less subject to the whims of politics—despite the increasingly close splits and increasingly frequent reversals of precedent, the political maelstrom surrounding each nomination, and the fact that it is just one of several co-equal branches of government. We have been lulled into believing that the Supreme Court possesses oracular powers to divine the Constitution’s meaning in a way the rest of us can’t.

Recent years’ decisions, and the frequency of 5-4 splits, have made it difficult to disagree with the fact that the Supreme Court is a fundamentally political, partisan body. How we got to that point is contestable. Liberals might date true partisanship—when the court went from being liberals and conservatives to being Democrats and Republicans—to Bush vs. Gore. Conservatives might say liberals themselves opened the floodgates to politicization with the Warren court’s expansive decisions on rights. Legal theorists might suggest this is simply part of the fundamental nature of law. As first-year law students learn, “easy cases” are rare and laws are never unambiguous. There is no unanimously agreed upon mode of interpretation. And even if we agreed on a mode of interpretation—even if, for instance, originalism was universally adopted as a means of constitutional interpretation—what the constitution “originally meant” is almost always up for reasonable debate.

A much larger court would make the Supreme Court more comparably sized to our federal circuit courts, as law professor Jonathan Turley observed in a his 2012 call for a 19-person court. Those regional circuit courts are composed of anywhere from 6 to 29 judges. Not all judges sit on all cases heard by the circuits, as most cases are decided by smaller panels of three. In a small number of cases, the entire circuit sits to review a previously convened panel’s decision. The larger size of the circuits, then, yields two advantages. First, it reduces the influence of a single, swing voter like Kennedy or, before him, Justice Sandra Day O’Connor. Second, there is variance in the panels, which are randomly drawn. Even on a supposedly liberal circuit, like the west coast’s 9th Circuit, cases are sometimes heard and decided by panels composed of three conservatives. The system promotes variety and prevents excessive entrenchment of, say, a 5-4 majority. This is counterbalanced by the fact that the full circuit can choose to review the decision, providing consistency. A modified version of this approach could be adopted for an an enlarged Supreme Court.

There are further benefits to a much larger Supreme Court. A larger court could hear more cases, which could help break up the cabal that currently controls the court’s docket. One of the most terrifying aspects of current Supreme Court practice is the politicking to get particular cases before it, which benefits a small cadre of insiders who are usually the system’s most staunch defenders. Unlike circuit courts, the Supreme Court picks and chooses which appeals it wants to hear. Currently it grants hearings for only about 80 out of 8,000 cases filed each term, making it five times harder to get your case in front of the court than to get into the nation’s most competitive colleges. That’s, put plainly, absurd. Because the court issues so few opinions, its few pronouncements have outsize influence. What’s especially disturbing is how the 80 cases are chosen. An increasingly small number of lawyers, who are usually past Supreme Court clerks themselves and who know what the court will look for in a petition for hearing, are responsible for most of the arguments before the court. A 2014 Reuters investigation found that just 66 lawyers, of whom 63 were white and 58 were men, were six times as likely to get their cases heard than any other lawyers. Half were former Supreme Court clerks. By hearing many more cases, a larger court would break up this scheme. A larger docket would be healthy in other ways, allowing a uniform national resolution of more disagreements between regional circuits. There is nothing in the Constitution that envisions the court hearing such a small fraction of the nation’s cases, and the framers lived in an era of extremely low federal judicial volume and minimal influence of the Supreme Court. At three times its current size, the court’s ratio of justices to filed appeals would be more in line with that of the circuits.

The greatest feature of an expansion is that it would convert what currently seems like an unavoidable vice—the court’s politicization—into a strength. Law cannot be divorced from politics. But politics can be made to work better with better institutional design. Just as a 9-person Congress would be highly undemocratic, dangerously powerful, and ultimately ineffective, a 9-person court is no better. Larger bodies have some inherent features that are more democratic and effective: they are more representative, and they can include a more diverse group; they can do more work; their splits are less likely to be narrow and therefore arbitrary; they have more regular, natural turnover, and any one vacancy would not dominate the political scene as it does today. If politics are inevitable, they should at least be made to work: a larger number means Republican justices and Democratic justices would be less likely to engage in simple bloc voting. With a larger body, more natural coalitions can develop, yielding richer dynamics than the 5-4 decisions that have become all too common these days. (Because justices serve for life, the coalitions could be more free-flowing and less beholden to the party system, unlike legislators who must maintain party support for committee assignments and reelection.) Finally, court size isn’t one of the design features that supposedly insulates the judiciary from the tyranny of the majority, unlike lifetime appointments.

The framers would be appalled by the degree to which we have abdicated responsibility for the constitution to a small, homogenous, unelected group. We should be appalled, too. But there is a solution. Enlargement will involve sacrifices by partisans on both sides, as a larger court will be less predictable. For liberals, it may be hard to move past their memories of a court that served them well over a half-century in expanding rights when political branches would not do the same. For conservatives, it may be hard to give up control just as they are finally cementing the victory of a multi-decade campaign to retake the judiciary. But increasing court size should not favor one particular party, and should appeal to all Americans—save perhaps the Supreme Court bar and former clerks. 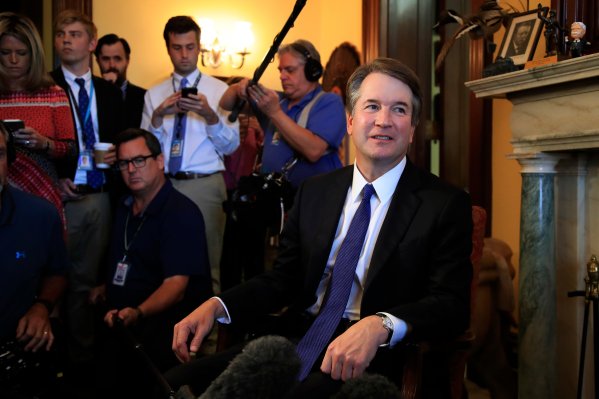 Brett Kavanaugh Will Right the Course of the Supreme Court
Next Up: Editor's Pick