Chequers might have been an oasis for President Donald Trump and Prime Minister Theresa May. The prime minister’s official country estate overlooks rolling fields and is tucked at the end of a maze of wooded one-way roads, more than 40 miles outside London.

There was no hint of the protests roiling the British capital out in balmy Buckinghamshire, quiet but for the helicopter arrival of Trump and the occasional mooing of cows. Trump and May seemed determined to put on a cheery performance to match the sunny skies, masking the storm that had rolled around them the night before.

Though Trump and May ritualistically affirmed the “special relationship” between the two countries in words and deeds, there was no hiding the tension that has arisen as the U.S. president lobbed unusually harsh criticism at his counterpart and undermined her controversial plan to guide the United Kingdom through Brexit.

The conflict is all the more jarring because it’s happening between two of the world’s closest allies, and because it’s merely the latest in a string of incidents where Trump has treated friends more like enemies.

Trump’s “America First” foreign policy has scrambled alliances between the United States and the countries that traditionally have been its closest allies: Trump’s negotiating strategy on the world stage is often to badger, criticize, insult and demand, causing a stir, before declaring success and publicly smoothing the feathers he has ruffled. Days ago in Brussels, Trump accused Germany of being “totally controlled” and “captive to Russia,” before sitting down with Chancellor Angela Merkel and declaring he had a “very, very good relationship”with her. He berated allies at the summit about defense spending, then crowed at the end of the summit that “NATO is much stronger now than it was two days ago.”

While Trump’s strategy has become clear, the potential effects of his bluster have not. The effects could be economic if allies levy retaliatory tariffs against the U.S., as Canadian Prime Minister Justin Trudeau threatened to do, or they could be more subtle and long-term if allied nations no longer trust the U.S. to protect their interests.

Trump is taking from the same playbook in his trip to the U.K., the first working visit since he became president. He gave a bombshell interview to The Sun that published Thursday evening in which he criticized May’s Brexit strategy and implied that former foreign minister Boris Johnson would make a better prime minister — the equivalent of a foreign leader sitting down with a U.S. newspaper to casually note that Rex Tillerson would make a great president. “Trump’s comments about Brexit, May, London, NATO and so much more raise doubts amongst many (but not all) in the U.K. about the reliability of the U.S. President to be a friend of the U.K.,” says Tim Oliver of Loughborough University London.

But Friday, Trump changed his tune, offering something of an olive branch. “Whatever you do is OK with us, just make sure we can trade together,” he said.

“The only thing I ask of Theresa is that we make sure we can trade (and) that we don’t have any restrictions. We want to trade with the U.K. and the U.K. wants to trade with us,” he added.

After a meeting and a working lunch, Trump and May faced the press, standing at podiums under the hot sun, with the picturesque structure of the Chequers estate behind them. They both wore red; May in a jacket, Trump in a tie. Trump held May’s hand as they descended a few steps to the podiums. At various points during their remarks she called him Donald; he called her Theresa.

They each seemed determined to show the press and the world that their relationship was unharmed by Trump’s indelicate interview, even on a personal level. Trump said he felt “embarrassed for the rest of the table” at their dinner last night because they spent so much time just talking to each other. He said May is doing a “terrific” job and that their countries’ relationship is “the highest level of special.” May praised his progress on the denuclearization of North Korea and on getting NATO allies to spend more on mutual defense.

There were just two moments during the nearly one hour the two leaders spent in front of the cameras where cracks in the veneer showed. In one, a British journalist asked May if she agreed with Trump’s assertion that Britain is “losing its culture” because of immigration. As Trump defended his comment, May remained stone-faced. When it was her turn, she tersely defended the U.K.’s “proud history” of immigration. “Over the years overall immigration has been good for the U.K.,” she said. “It’s brought people with different backgrounds, different outlooks here to the U.K. and we’ve seen them contributing to our society.”

And in the second, in his effort to once again smooth over the Sun interview, Trump may have inadvertently revealed an exchange May would rather he have kept in confidence. “When I saw her this morning I said I want to apologize, because I said such good things about you,” Trump said, referring to May. “She said, ‘Don’t worry, it’s only the press.” May looked utterly stricken and laughed uncomfortably before ending the presser, which had run much longer than expected, after that question.

The U.K. is perhaps the ultimate test of how far Trump is willing to go in undermining allies. The U.S. and the U.K. share what’s known as the “special relationship,” which encompasses the incredibly close ties between the two nations in all facets of modern life: historical, cultural, economic, diplomatic, political, etc. But the core of the special relationship, explains Oliver, is military, focused on nuclear weapons, intelligence sharing and special forces. It’s “a core that’s protected from the vagaries of the wider relationship, such as presidential and prime ministerial relations,” he says. But, “Trump, and May’s weakness, [are] putting pressure on that core in ways we’ve never seen before.”

Trump barreled into his first official U.K. visit as president by unleashing a bombastic interview with a British tabloid owned by Rupert Murdoch. In the interview, given before he left Brussels for the U.K., he criticized May’s plan for a soft Brexit. “I would have done it much differently,” he said. “I actually told Theresa May how to do it but she didn’t agree, she didn’t listen to me.” He threatened that if May’s plan goes through, it could crush the chance for a trade deal between the U.S. and the U.K. “If they do a deal like that, we would most likely be dealing with the European Union instead of dealing with the U.K., so it will probably kill the deal,” he said.

The interview could hardly have come out at a worse time for May, who is dealing with her own political turmoil over extricating Britain from the European Union and trying to manage the delicate politics of hosting Trump, who is hugely unpopular in the U.K. “Trump’s Sun interview is Theresa May’s worst nightmare,” says Brian Klaas, fellow in Comparative Politics in the LSE Department of Government. “She may yet try to make nice for the cameras, but privately, she’s almost certainly fuming. It’s hard to imagine Trump giving a more damaging interview at a time when her leadership has been undercut by a series of damaging high-profile resignations.”

Trump’s staff had to scramble into late-night damage control mode. After Trump and May ate an elegant dinner at Blenheim Palace Thursday night, during which the Sun interview news broke, White House spokeswoman Sarah Sanders disseminated a statement to the press at nearly 2 a.m. local time, saying, “The President likes and respects Prime Minister May very much” and that “he is thankful for the wonderful welcome from the Prime Minister here in the U.K.”

As with the G7, which Trump finished by meeting with North Korean leader Kim Jong Un, the contrast in how the president interacts with foreign powers is once again cast into even sharper relief as Trump prepares to meet with Russian President Vladimir Putin, who may have had a hand in poisoning four people on British soil this year, just three days after he parts with May. “He’s not my enemy,” Trump said of Putin at the NATO summit in Brussels. “Is he a friend? No, I don’t know him well enough. … Ultimately, he’s a competitor.”

It was a telling choice of words for a president who views foreign policy like much else in his life: a zero-sum game. For Trump, there are no allies and no enemies, only competitors. 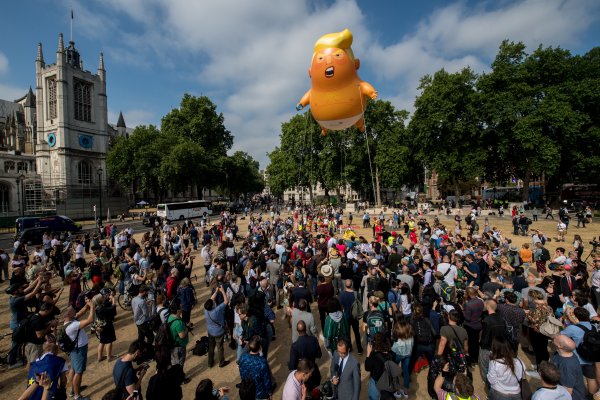 London Brawling
Next Up: Editor's Pick